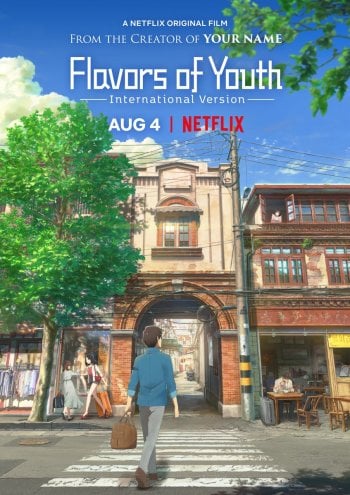 Flavors of youth tells three different stories of youth set in different cities of China and the film takes you on three contemplative and fascinating stories around past and lost youth.
The animation/art is really good and I really liked the chinese vibes of the story. BUT I wonder if there is any better topic of choice besides modeling and fashion when it comes to stories about women. This is why my favorite story is the first one. It's the shortest, yet the most fascinating. some simple things bring to many people so much joy, it keeps you happy and humble just watching.
BUT from CoMix Wave Films (Your name, 5 centimeters per seconds, The garden of words) collaboration with Netflix, I was expecting much more. The three stories don't connect, there are 3 short films, and meanwhile their author/maker are very talented, I can't help wonder and now what?

“Flavors of Youth” is a Netflix original anime describes Chinese culture and the current event of its histories. While this anime takes a lot of context of Chinese culture, it’s also introducing a large economic growth in such the country. With such a spectacular anthology, this movie divided into three different parts of the story. The concept of these takes its story of time running fast, relationships between families, and love stories through memory. And the success of CoMix Wave Films is truly amazing considering they have worked on one of the best anime movie ever, “Your Name”. They also worked on many movie anime, especially all Makoto Shinkai and others.

In “Flavors of Youth”, Netflix chose three names of directors in this separate anthology story. They are Li Haoling, Yoshitaka Takeuchi, and Jiaoshou Yi Xiaoxing. Most cultures in these three episodes covering the entire Chinese culture are especially difficult for non-Chinese people. The first story, “Sunny Breakfast”, tells about Xiaomin which ties his relationship with his family and the people he met through a noodle. He has fond memories through his own favorite noodles. It’s conveyed through the narration by himself. As we follow his life from childhood until he grows up, separates between how the noodles taste now and the noodles given by his grandmother. Therefore, the title itself is called “flavors of youth” in addition to the taste of noodles he remembers and how sweet, warm, and bitter the memories he went through.

The second story is “A Little Fashion Show”. It tells about the relationship between siblings who have different jobs. It’s one of the most straightforward of all and introduces the main character quickly. It includes a story about the relationship of the siblings told through their own lives and world. But, this has one of the weakest stories compared to the first and the last story. In addition to the rather forced and a rather disappointing ending, the story is indeed somewhat relatable for some people. The transition between flashbacks and the current events now seems to be an interesting point from this. This is a story of guilt with sustained infected scars. When popularity can make someone fake, it makes us realize there are still people closest to us who still love us.

“Shanghai Love” is the final story of “Flavors of Youth” and is the only romance and coming-of-age story compared to previous stories. It’s about three adolescent who two of them fall in love with each other. They can only convey their feelings and memories through cassette tapes. This story more like a romance about relationships, friendship, emotions, grown up, and trying to be an adult. But, unlike the Makoto Shinkai-style romance stories, this story isn’t as complex as anything. Regardless of which, this story is more about the problems occur in China itself, especially in Shanghai and thick Chinese cultures. The transition between flashback and present is so unique editing. It’s the longest story of this anthology as well. This finale ends with time slipping slowly but fast forward. We can’t go back. Time is just trying to walk forward.

“Flavors of Youth” is an anthology story about youth, time, and life to become an adult. In conclusion, the process of making peace with the past is the thick style of this movie. Sometimes, we just want to go back to our childhood how many memories are mixed in it. Like “flavors” in a food. Each episode has a different impression. Sometimes charming, sad, and melancholic. It’s a reflection of this mortal life. We move forward and move forward, never go back at all. But, we want to go back to the past. We want to go back to recount all of our memories. A very promising and thick Chinese culture is the most interesting point of this film.

I felt that this anime had a lot of potential for growth and to explore the hidden depths and emotions of the characters...except it didn't

I was just very dissapointed with this movie.

(SPOILER) It was a good watch for me.

I really liked the first story where it was very relaxing that it made me hungry. I like how it was a simple story not too dramatic 'cause  The story is about a boy having nostalgia while eating the noodles, I think it was the second, if I would rate it out of all the three stories in this movie.

The second story was about siblings having problems and it was good, but it did not had quite the effect on me but the story and the lines of the characters was good. It would be the last story I liked out of all the three.

The last one was really good the story was amazing, I loved how they communicate through video tapes (I'm not sure if that's what you call it) it was really amazing, like if only I could experience those things, and how the boy got so focused on just studying to prove something, that if only he listened to that fudging tape. Well it was my favorite out of all the three sotries I think.

This anime consists of three different stories about youth and the importance of friendship and family. It is an anime which has happy and weepy moments. The characers are well developed in the short space of time.