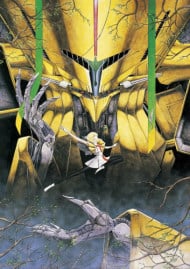 The Joker Cluster is a group of 4 solar systems, inhabited by thousands of countries and millions of people. Amongst the kingdoms, men called Headd Liners pilot mecha known as Mortar Headd, which are also manned by fatima, android women who act as the bridge between the machine and its pilot. Ladios Sopp is a young man on his way to an android auction, where he hopes to retrieve a fatima from his past, Lachesis. But retrieving her will be no easy task, and along the way, he will meet new friends and make new enemies before reaching his goal.

The Five Star Stories is an OVA that came out in 1989, based on a still "ongoing" manga that started in 1986 (for as far as you can call it ongoing, with only one volume being released in over 10 years). Given those circumstances, you can only expect the OVA to be an introduction to the series: it only adapts 1 Japanese volume (or 3 of the North-American volumes).  So, is the story here any good then? Simply put: I found it to be one big teaser. We get teasers for big mecha fights, teasers for an epic war, teasers for intricate political debates and even teasers for cool fights between lightsaber-wielding warriors. The rest of it is just a basic story of a guy saving the girl he likes from some evil guy, while some friends help him to save the day. All the "fights" amount to is curbstomping some small-fry, until they suddenly need the deus-ex-machina (or is that a mecha-ex-machina ?) for the final fight.  The ideas put in the world-building are fine, and the story has enough twists and turns to keep you interested, but when you get down to it there's not that much to be found here in terms of story. Lots of the worldbuilding stuff is also just info-dumped, and never gets much expansion beyond that. I also have a big problem with the characters: a guy we know nothing about comes to save the girls from their ivory tower, and gets the help of some other people we know nothing about, plus some motivation from some kind of ghost... It's also very annoying to see how helpless the girls are acting. The entire time, those girls do absolutely nothing except for running, crying and shaking.  When we get to the animation and artwork department, my soul tears apart because this section has some things that are exceptionally good and some that are really bad. When you look at the overall picture, the artwork and animation are very good (especially when you think about how old it is): the backgrounds, most of the movements, and the mecha designs are very well done. But then you look at the character designs and... BLERGH. Why do two guys look like girls? Why do the girls and those two guys have those screwed up proportions? I don't think anyone could be that thin, have such long necks, or have no hips or butt. And don't even get me started on those gooey "shoujo-eyes". I know it's anime, and it doesn't have to look realistic, but there are points at which even I think it's too much. Those character designs were just distracting imo, although there will probably be people who like it.  (By the way, the bad guy looks like a generic evil fatass too.) On the sound part: music was ok , although often a tad cheesy. VAs were good too, although I felt like Ladios Sopp's VA didn't really fit here. Overall: it was an OK watch, but I feel like it could have been so much more. The story was enjoyable, the characters unknown or annoying, and both sound and animation had their good and bad parts. The fact that I'd need to read a manga with tons of hiatuses to get more also doesn't really motivate me to pick it up to get what was teased here. 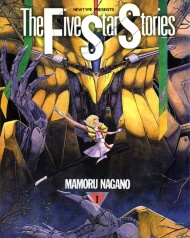 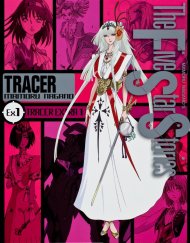