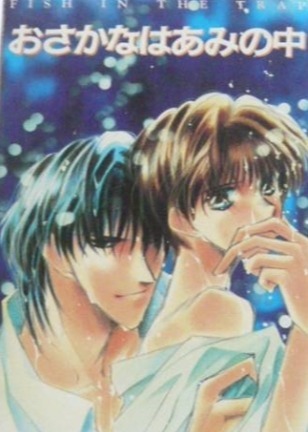 Yukio has never had an easy life, and now lives in a slum with his friend, Tetsu. With his younger brother, Jun, in hospital and hefty medical bills to pay, he inadvertently turned to a local mafia boss, Hyodo for help. Now Hyodo pays the fees in return for Yukio joining his ranks and so the boisterous and irritable teen visits once a week to play chess. Meanwhile, Tetsu can do nothing but look on from the outside, and despite his feelings for Yukio and his desire to keep him safe, his best friend remains oblivious. With unrest brewing between Hyodo’s gang and a rival faction known as "Snake", and Yukio’s past returning to haunt him, Tetsu is even more determined to protect his best friend; but just what is hidden in Yukio’s past and why won’t he tell Tetsu the full story?

The Sorcerer on the Hill

The town of Gelle is home to many wizards. Lee, a socerer, and Rabel, his apprentice, live on the outskirts, on top of a hill. They may not have much money, and Lee may be a little odd and unsociable, but Rabel is content with spending his days learning magic and going to school. Lee watches over Rabel, sometimes strict and sometimes soft, but...

Hajime Serizawa works in a book store and one day, while searching for a particular book, he meets Keito a tall boy with a somewhat intense face. Initially scared by his appearance, after seeing more of his behaviour, Hajime soon realises that Keito is in fact a sweet, timid and highly awkward boy. Then, when he spots Keito tending to some abandoned cats, the pair has an excuse to see each other outside of the shop. As they bond over café lattes the two grow closer and begin to date, but with Hajime’s insecurities troubling him, will they truly be able to remain together?

Koyama Kei lost his mother when he was still in elementary school and never connected again with his distant, workaholic father. The only real light in his home life is his sister Moe: a bright college student who obviously adores him. But Kei has intimacy issues that even his sister can't pick up on. At 15 years old, Kei's never been in love, but he has sex with anyone who shows him interest. While he's in someone else's arms, he can forget the void in his own life. One day in late spring, Koyama discovers what's missing: a slightly spacey med-student named Fujii. Unfortunately, Fujii is his sister's boyfriend...

God lives within words, so you must never lie. Mizuki's grandma taught Mizuki and Makoto that, right before Makoto made a promise and moved away. Years went by and they met again. This time, one of them would become a liar.

A seemingly mundane day of patrolling the streets, could be a journey of a life time for our detective when his gun and ID badge were stolen by a bunch of kids, said gun pointed at his back and blackmailed into wandering the land with a mysterious teenager.

A country boy named Akira Nonaka is attending his grandmother's funeral when a man arrives and tells him that he still have living relatives: the renowned and wealthy Takatou family! After being whisked away as a candidate for leadership, Akira meets his cousin Kyle Rei Basil and finds out that he must compete for a family name he doesn't want. Not to mention, did Rei just… kiss him?! As if things couldn’t get worse, Akira must also struggle learning the ropes of the rich and meeting strange relatives, including Raoul who is set on proving that he is better than Rei at any cost - even if he has to kidnap Akira to do it! How will Akira ever handle this new life?