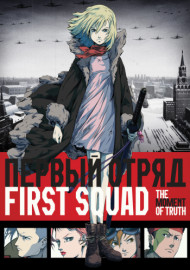 During the opening days of World War II on the Eastern Front, a group of Soviet teenagers, each with an extraordinary ability, are drafted to form a special unit to fight the invading German army. They are opposed by a Schutzstaffel (SS) officer who is attempting to raise from the dead a supernatural army of crusaders from the 12th Century Order of the Sacred Cross and enlist them in the Nazi cause.

Russian Frontlines Studio 4°C’s anime transcends the borders of Japan. From Linkin Park's "Breaking the Habit", to the Animatrix, and even to the Gotham Knight, their portfolio is varied and extensive. First Squad, their latest effort, is a collaboration between two Russian directors and 4°C, crossing the sea once again to create international anime. I had high hopes for First Squad, as the Studio's last movie, Tekkon Kinkreet, was excellent. However, the bullets of the collaboration were quick to puncture my hopes; after an hour and thirteen minutes they looked like swiss cheese. The story of First Squad is told in a unique fashion: meshing live action documentary with more traditional animation. There is an interesting interplay, as Russian scholars and veterans ground the fantastical story into reality. First Squad could be commended on this approach if the story itself were not so weak. The plot is predictable; the Nazi's are beckoning vengeful spirits from the other realm, and the Russian's need to stop them. The characters don't do much to salvage the poor tale. The pacing is erratic and disjointed, jumping from scene to scene with little sense of cohesion. The movie's namesake, the First Squad, is a poorly developed cast, with only slivers of background ever filled in. Nadya, the main antagonist, is drawn from clichés –an amnesiac psychic who would give life and limb for country. The voice acting didn't help prop up the narrative. The Russian voice actors sound deflated, their flat voices conveying plastic emotion. Scenes riddled with melodrama come off as comical because the voice actors just don't seem to care. The music was passable, a boisterous overture in the opening that harkens to any military film. The rest of the score is appropriate, weaving melodies from low growling organs with the rhythmic hum of violins. Studio 4°C does deliver the goods on the art. A muted palette washes over the snowy seas of the Eastern Front. Moscow’s majesty is quiet from the war-torn world, a stark contrast to the Gloom World, a twisted realm where fallen warriors continue to tear at one another. Russia is a feast to look at to say the least. Excellent cell-shaded CGI is threaded together with top-notch animation create a stunning effect. Artists made a successful effort in modeling the characters, drawn to have a distinctive Caucasian look. It's jarring to see characters visages evoke a strong emotion, when their voices are low and uninspired. First Squad, to say the least, disappointed me. Despite the pretty little black dress it wears, what is inside does not satisfy. The story is forgettable, the characters are paper-thin, and the voice acting isn’t exactly inspiring. I praise Studio 4°C for attempting to blend two styles –documentary and anime. Hopefully this method of storytelling won’t be thrown to the wayside, and will be used to create a much more engaging and entertaining experience.

Every now and again, there is an anime project done in conjunction with a country outside of Japan. With First Squad, the project was done in conjunction with Japanese animation studio Studio 4C and a Russian company Molot Entertainment. Molot Entertainment doesn’t seem to have done much else besides First Squad besides another animated film called Ivan about a post-apocalyptic world filled with magical creatures such as dragons From what I can find, the company seems to be focused on helping promote independent projects. First Squad itself seems to have an interesting history by itself. Starting out as a music video in 2005 by both Studio 4C and Molot Entertainment, with the song for the music video done by MC Ligalize. It even won an award at the MTV Russian Music Awards for best hip-hop video in 2006. By 2007, the Russian studio behind the music video announced that they were working on a film adaptation of the music video. 2 years later, First Squad: Moment of Truth was released to the public. Apparently, is was well received enough in it’s home country of Russia that it even went on to win an award by the Kommersant newspaper’s prize. There was even a graphic novel adaptation the year after First Squad’s release. So with the surprisingly interesting history of First Squad out of the way, let’s have a closer look at it. Set during World War II on the Eastern Front, a group of Nazi mystics plan to resurrect Baron von Wolff and his Teutonic Knights during the “Moment of Truth”, a moment that has appeared throughout various points in time that will determine the outcome of any significant conflict. To prevent this, Division Six of the Soviet Military intelligence has enlisted a group of young people with special abilities to fight the invading German armies and prevent the Nazi’s from reaching their goal. The story follows a young clairvoyant girl named Nadya, who survived a deadly air raid attack only to be left shell-shocked. While recovering from her concussion, she soon discovers that she has a new ability, the ability to foresee said “Moments of Truth”. Soon, she is taken into Division Six, and is trained along with the rest of the rest of the squad to prevent the Moment of Truth from being used by the Nazis to win the war. Unfortunately the whole movie is a bit of a mixed bad. While the premise is great, the rest of the movie is a bit underwhelming. The fact that this movie is only an hour long is the thing that unfortunately drags this whole thing down. I’m going to assume that the team behind First Squad not having a bigger budget, not having enough time, or not having both is the reason that the length of this movie is so short. I don’t know how much better it would have been having an extra 15 minutes, but I feel like the whole thing would have definitely felt a lot smoother. As a side effect of the length of this movie, the characters don’t always get the character development they need. Nadya pretty much gets most of it because she’s the main character, but the rest of the characters only get the most minor of character development, something that could have been solved with a longer length. The few action scenes that this movie gets are just OK, nothing to write home about. There is actually two versions of First Squad. A “Theatrical” cut and a “Director’s” cut.The only difference between both versions is every now an again in the “Director’s” cut there are a brief interviews done with veterans, historians, and other live actors in between the rest of the movie. These are basically just here to not only try and lengthen the movie with the meager budget they had, but these are more of a mixed bag than anything. Some of them don’t really add anything, such as the one interview that simply explains what sedatives are. Maybe it’s to give it some authenticity, but considering that the whole thing flows much better without them, I can’t really recommend the “Director’s” cut unless you found something about the original interesting enough to warrant something more. First Squad: Moment of Truth might be a rocky in terms of quality, but I don’t really hate it. It’s not something you should immediately go out and see, but it’s worth checking out if you some free time and it looks interesting to you. </div>

Warning this Review may contain spoilers- This show was terrible T-T This show brings us to the world of a world war meeting fantasy genres, two genres that probably shouldn't be combined at all. This is a perfect example why this shouldn't happen, at all. STORY The story was really bad, the pacing was off and it was just boring overall. Sitting through an hour of it trying to be interesting yet failing terriblely was pretty much the whole story in a nutshell, they tried to cram so much into the hour that the cross of genres just didn't work. The story overall was just meh and honestly, this wouldn't be a show I would rewatch. ANIMATION Animation wise, I don't think it was too bad, the animation I admit I didn't really like but the quality of the animation was quite good...that's it. SOUND The sound was meh, no character voices stood out to me and it was just a pain to listen to it The soundtrack was also meh so yeah this whole movie was underaverage and I don't think the music could of saved it, no matter how good it was. CHARACTERS *Sigh* These characters were just bad, along with the story it was all just one big mess and the development of the characters were close to none existant. The main female I just didn't like, I found her way too generic  and just boring all together...the other characters aren't really worth discussing. Overall this was a terrible movie, but if you want to watch it...I won't stop you. AngelBeatsYui PS: This is for the Daily Anime Marathon Club March 2016 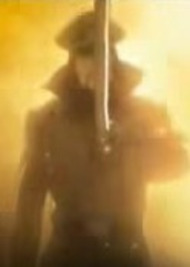