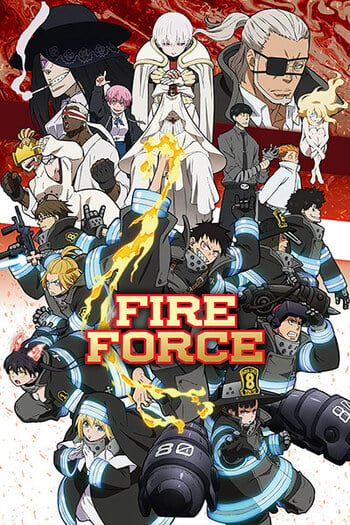 Debochi Amon (14) was always a passionate boy and had a tendency to literally steam up. Amon was living a normal life; going to school, hanging with friends and thinking about his crush on his classmate, Shinomoto Sako. One day, a third eye opens on his forehead after one of his usual “steaming” incidents and a talking owl creature who calls himself Goomin appears. Both characters are confused at the situation at hand and Goomin finally is able to explain the situation to Amon. Amon now possesses Pyrokinesis and his power of his fire increases when his passion grows. His emotion of wanting to protect something, like his crush Shinomoto, triggers the transformation into a demonic figure and his flame is powered through greed. Now, Amon must learn to control and use his powers to protect the human world from Angels!

Ban Midou and Ginji Amano are the Get Backers. With a 99 percent success rate in returning lost or stolen property to its original owners, they will do anything for the right price. Midou and Ginji often get hired for seemingly ordinary jobs that turn out to be more difficult than they appear; and whether it's finding a doll for a girl, retrieving a stolen rare violin or getting mixed up with the mob, they have many adventures with plenty of petty squabbles along the way!

Suzuki Kojirou is a member of the public morals committee at a high school which gathers a lot of students whose “Kago” powers are stronger than normal people. But, for some reason, he’s being pestered everyday by the super beautiful president of the public morals committee, Asagiri Lauri, who always has to run around solving all kinds of problems within the school because of his strong power.