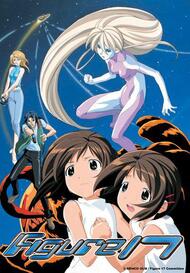 While transporting bio-weapon lifeforms, Agent DD, member of an alien police force, is forced to crash land on Earth. Amidst the chaos of the crash, a bio-weapon escapes and DD is forced to fight it, while accidentally activating a Liberus, a liquid battle suit. Tsubasa, a shy girl, unwillingly comes into contact with the Liberius and is thereafter forced to fight for the survival of Earth.

Story Primary school girl moves from Tokyo to Hokkaido on account of her single father deciding to go there to train as a baker. Cute slice-of-life scenes ensue! And for the majority of each double-length episode, that's all there is to the story – Tsubasa goes to school, plays sports, does homework assignments, watches cows being born and stuff like that, all the while accompanied by her liquid-based alien doppelganger 'twin sister'. I kid you not. As well as the innocent slice-of-life side to Figure 17, there's also a sci-fi action 'protect the world from evil alien invaders' story running in the background. Tsubasa gets mixed up with it all in the first episode, ends up merging with a living liquid called a Riberus, and for reasons unknown Hikaru is born. But aside from this initial major event, and the final showdown in the last episode, the battles against the Maguya were very much a sidestory, making up less than a quarter of most eps. The Maguya were terrifying plant/insect/nightmare hybrids, all teeth, tentacles and eyestalks ('Family friendly tag'? You sure about that?), and they continually evolved and got stronger, forcing the heroes to come up with new attack methods of their own. Though these parts of the ep weren't boring, they did feel a bit rushed, and the contrast with the moe-cuteness made it seem like I was watching two different series! Figure 17 aired one episode per month, as opposed to the usual weekly episodes, and the series itself reflected this passage of time - a year goes by in-series between the first episode and the last, starting and ending in the winter, and the changing seasons determine what events the characters take part in at school or in their free time in each episode. I love little details like that!   Characters Tsubasa is a very shy and quiet main character at the start of the series, whereas Hikaru (despite sharing her looks and memories) is far more confident and active. As the series goes by, she helps build her 'sister's confidence and encourages her to do things that she wouldn't have done before. Their classmates were also brilliantly introduced and developed as the series went by, each with very different personalities. This made the happy, fun times enjoyable to watch, and the sad or dramatic times far more emotional than I'd have expected at the start. The main reason I didn't give it a full 10 is, again, the alien-fighting subplot. Agents DD and Ordina just didn't receive anywhere near as much character development, so were a bit boring.   Animation and Sound The animation in Figure 17 was of fairly high quality, which I assume is down to the fact it aired monthly instead of every week. Unfortunately, it was produced in 2001 at a resolution of somewhere around 360p – I'm not going to deduct points for that, but if you're planning on watching it, bear in mind that it's not going to look amazing on a 1080p screen (especially given the quality of fansub encodes back then as well!) I really loved the opening and ending themes, a lot. The background music was nice enough, though there wasn't a lot of variety, the same two tracks or variations on them kept cropping up over and over, hence the lower rating.   Overall As a slice-of-life series, Figure 17 was one of the best I've ever seen, likely due to its longer running time and great character development. I'm just not sure it needed the aliens, their cover-story that they were twins raised separately would have worked just as well as a plot.

I have only watched up to the 2nd episode. Then: Dropped. First of all, I think its a slow paced anime. That isnt a bad thing depending on what you like. I dont mind slow animes as long as during the slowness they give you something to think about. This, being a rather childish anime, it doesnt give you a lot to think about. warning: some spoiling info (if it was me, i wouldnt care... but just in case) The story... is basically about an alien that crash lands on earth carrying multiple monster aliens, and the guy alien, which looks just like a human (... i know... right? If you want a more realistic alien anime, i advise level e). This guy alien.. well from his planet they have these liquid metal life forms, that he can combine with for a power suit.. but even though he wears it, he cant beat the aliens alone... although he tries... lol The main girl ends up fusing with one of these metal life forms, and since she is human, the life form takes the shape of her (so = twin when not equiped). When the girl and the twin are formed... they grow to about middle school/high school looking girl = more boobs, better body, super hero.. lol anyways... i dont want to bad mouth this anime, but it just wasnt for me. It probably gets better though... If anyone can vouche (agree or disagree), then please leave a reply briefly explaining what you think. 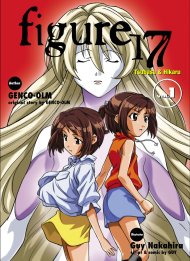