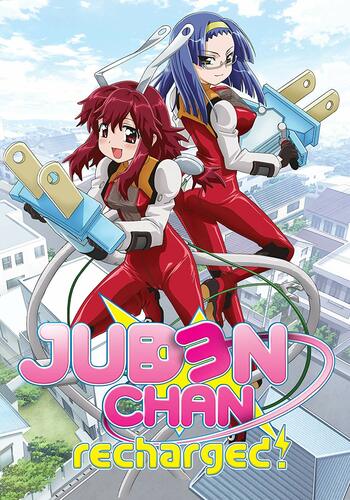 Papillon Rose and Juuden-chan are both about magical girls (well, JC is sort of magical girls) and are filled with copious amounts of borderline explicit (or flat out explicit) situations. If you liked one you'd enjoy the other for sure.

If crazy ecchi scenes is what you are looking for you came to the right place with these two titles! Both anime have tonnes of ecchi and wacky characters that face these perversions everyday! Juuden-Chan has a tad more comedy to it where Papillon Rose takes on magical girl powers. Check one out if you liked the other

Helping out humanity is what the characters do best in each anime. The main differences between the two is that Juuden-Chan has ecchi in it that is pretty intence where Nurse Witch Komugi has overpowering cuteness. Both will make you giggle and laugh. Check one out if you liked the other.

Both anime have Ecchi in them but take it to the MAX! Perversions, boobs, asses, and odd sexual scenes are in adbundance in both of these anime. QB takes a more action side to the maddness where Juuden-Chan is "slightly" more down to earth and has much more comedy in it. I highly suggest checking out one if you loved the other.

Wacky, crazy, full of ecchi and laughter. Both these anime have it. It feels like they were made for eachother. Both have very odd characters that find themselves in very interesting perverted situations that are sure to make you laugh. Check out one if you liked the other as they are a perfect match for eachother.

Dokuro-chan is essentially Juuden-chan but with gore instead of ecchi, and is generally funnier and better in every way.

Fight Ippatsu has a disturbing amount of ecchi, specifically involving girls peeing themselves and tentacle rape, while Aika Zero is comprised almost solely of crotch shots. If you want over the top ecchi, these will fit the bill.

Juuden-chan and Qwaser are equally as disturbing, revolving around two fetishes - peeing and breast milk. I have no idea why you liked either of these but if for some reason you got off on the idea of one, check out the other too.

Asobi ni Iku Yo! and Fight Ippatsu! Juuden-chan!! are two very fanservice-y series that involve extra terrestrial beings. Or at least life forms that do not originate from Earth. I do think you'll like one anime if you enjoyed the other because there are some similar issues that arise in both anime. Both series touch upon science fiction elements whereas Asobi ni Iku Yo! features some cool gun-action and Juuden-chan is a lot more silly. You also have these girls in skin-tight "space" suits while at work. The main guy somehow gets involved in outer-Earth missions and that's when more powerful forces take interest in him. I think Juuden-chan takes a more "ecchi" role with its urophilia while Asobi ni Iku Yo! takes almost every opportunity for nude shots. Take your pick.

Juuden-chan takes it way way farther than Upotte, but the creepy sexual elements of these remind me of each other :| fans of one might enjoy the other.

Haruka Minazuki and Aoi Kannazuki are freshman high school students and best friends who enjoy school life like any other kid. But what's different about them is they live a different life at night fighting off demons and enemies.

Both are very ecchi anime with girls fighting battles that seem not nearly as serious as the fan service moments littered throughout the anime itself.