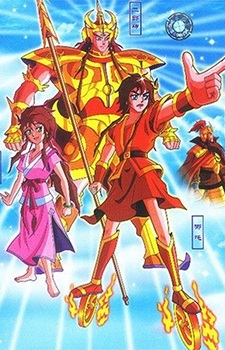 If you're looking for manga similar to Feng Shen Bang Chuan Qi, you might like these titles.

Chen Yang was just an ordinary person. One day, he was given an opportunity: he was offered the ability to control his luck! Love, status, and fortune were suddenly all within his grasp. When a person can control his luck at will, how will his life change? Will he run into beauties as soon as he steps outside his door? Will he trade as much stock as he possibly can? Damn... it's too good to be true... Those who are my friends will all live wonderful lives. Those who are my enemies have already paid the price!!

Second season of Shape of the Wind.

When a mysterious heartbeat is detected under the seas of Japan, Luminous, Caesar Gattuso and Johann Chu, (also known as the Ace Team of Cassell College) get sent on a mission to Tokyo, where they must cooperate with Cassell's Japanese branch, led by the conflicted Chisei Gen. After an unexpected turn of events, the trio will find itself in the middle of a hybrid mafia war.

The Sword of Emperor

A young Emperor is cast out of his Empire by his uncle, who seizes the throne for himself. The young Emperor sets out to become the strongest among the living, and take back what is rightfully his...

Once... Humans and Orcs peacefully co-existed, but at some point humans got greedy and started a war claiming the Orcs' territory. The diety-Lord who created all, got angry with the humans' greed and decided to punish them with 3 catastrophes. One of them was the "Dragons", divine creatures blessed with magic capable of doing almost anything. Now the Orcs, with a "Dragon" by their side, seem to have the upper hand. Will humans just sit back and see their land get destroyed? They are too devious for that... Their only good plan at that point is to abduct a "Dragon" to even things up. But how are they going to manage the capture of a being with so much power?

A lone knight who for many years served House Tersia, on the eastern edge of the continent. Now old and weak, he saw that it would not be long before he left this world. And so he retired from his master’s service, gave up his fortune and set off on a journey. A carefree journey with rare sights and food. But he did not know it. That this journey was the beginning of a story that would one day be talked about all over the continent.

When a family was unjustly massacred by a great general, a young boy named Ning Que escaped. He managed to survive in the wilds through his wits and growing fighting skills. One day he dug out from a pile of corpses a baby girl, that he named Sang Sang. Since that day the two of them are inseparable. Ning Que joined the frontier military and eventually become part of the entourage of Princess Li Yu as she traveled back to the capital. He managed to discover the hidden school known as the Upper Storey, which leads him and Sang Sang to many wondrous adventures.

Balsa returns to her birthplace in Kanbal to revisit her past with Jiguro, the man who raised her. When she finds out that he has been implicated for the death of the king, she fights to clear his name, and on the way uncovers the hidden part of Kanbal.

In the aftermath of the Hyperspace Disaster, young Jedi Knight, Lily Tora-Asi is assigned to help displaced civilians relocate to Banchii, a newly inhabited planet in the Inugg system far in the outer rim. Banchii is the site of a new Jedi temple led by Master Arkoff, Lily’s Wookiee mentor, who imagines the temple as a place of peace for new inhabitants and for those who are traveling beyond. While balancing the arrival of incoming settlers with the strange mysteries of this remote outpost, Lily wonders if she’s doing enough to bring peace to the galaxy. But when hidden dangers begin to emerge, the young Jedi will face her greatest challenge yet...