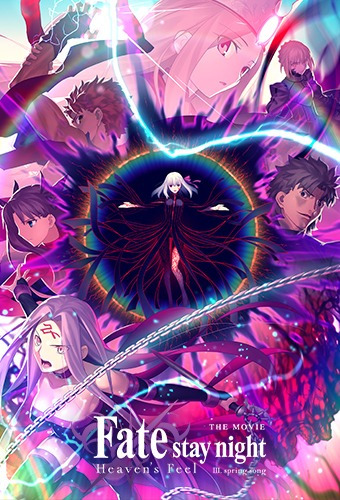 This movie was a fantastic conclusion to an already fantastic series. I never personally played the Fate games so I don't truly know if the movie kept true to the source material but any newcomer into the Fate franchise, like I was a long time ago, would be able to enjoy the 3 movies without a problem. Overall this movie was a solid 9.5 out of ten for reasons I'll cover below.

Story - The story is the finalization of the previous 2 "Fate/stay night: Heaven's Feel" movies and serves as a nice wrap up to the animated "Heaven's Feel" path of the Fate games. It would have gotten a 10 as well but, the ending was confusing and some parts of said ending were relatively unnecessary. This resulted in me leaving the theater with a bad taste in my mouth. Apart from the ending, there is not much else to say about the story without spoiling the entire movie.

Animation - If you are watching the third movie in the trilogy then it is almost guaranteed that you are familiar with the animation from the studio said to have an "unlimited budget" so there is not much to go into here. In summary, the fights are fast paced, high-octane and fluid just like its predecessors. Movement is realistic for the most part and background scenes are fair. The colors are vivid and really bring the image to life. It is pretty clear that a lot of time, effort and money was put into the series from the sheer amount of details put into the everything. For these reasons it gets and easy 10/10

Sound - The sound is up to preference on how to score it. The fight scenes are filled with a lot of bass which sounds incredible if you were to watch the movie in theaters or with a home-theater system and in some cases headphones work as well. The soundtrack is one of the best I've heard in an action series in a long time. Throughout the fight scenes there seems to be a perfect balance between the action going on and the music in the background so immersion isn't broken and the aforementioned bass of the fight doesn't trump over the music and vice versa. Immersion is also formed from the fantastic sound design which makes you feel as though you're right there among the characters. For these reasons sound deserves a 10/10 as well.

Characters - Finally, on characters, they are pretty much the same characters we see in the other installments, especially other installments within the trilogy. This movie gave everybody, including minor characters, important roles at some point in the film which is nice. Sakura and Shirou get a majority of the screen time (as expected), but they don't seem to waste even a second of the time they are given, having all of their dialogue and actions moving the story forward. previously "side character" characters like Illya and Rin also play important roles moving them from the "side character" role to the "main character role" within the story and minor characters, like Berserker, are expanded upon in this particular movie which is also nice. All of this together also gives characters a 10/10.

Final verdict - Overall if you liked the previous installments of the Ufotable "Fate/Stay night" franchise then you're really gonna love this movie. The action is what we all know and love and I particularly had a smile from cheek to cheek throughout the entire movie which left my cheekbones hurting after. The movie wraps up the trilogy fantastically and doesn't follow the usual trope seen in majority of shonen anime now-a-days. If it wasn't for the weird ending leaving a bad taste in my mouth, I would have easily given this movie a 10/10 but as it stands, it gets a 9.5 (maybe after re-watching it a couple of times I'll change my rating). I'm not usually one to give an anime a review, and I'm typically biased to liking romance anime and the likes, but this series, and this movie particularly, was something I could not ignore. If you've read this far, I implore you to go watch the movie yourself and see what you think. Its game changing.

A beautiful movie indeed, beautiful in it's pure meaning. Everything was awesome and this trilogy is definitely in my top movies of all time. You have read it in other places, ufotable is top on sounds and visuals. This gives us a nice end to Stay Night's Sakura's route. Now, it wasn't perfect (S P O I L E R  A L E R T S read with caution).

One: The fights (excluding Shiro vs Kirei) were kinda disappointing since there were not too much choreography. Yeah, the effects were stunningly good but I wish there was more to the other fights. And besides that, the use of the space in Medusa vs Salter was unstable.

Two: The end was very confusing at first, it could be more clear to make the final scene much more touching.

Three: This is kinda subjective but there are scenes in which ufotable makes the sames mistakes as other studios with the animation and use of space. It wasn't that obvious but is kinda sad to see a bad resolution Shiro gif while Sakura was expresing herself.