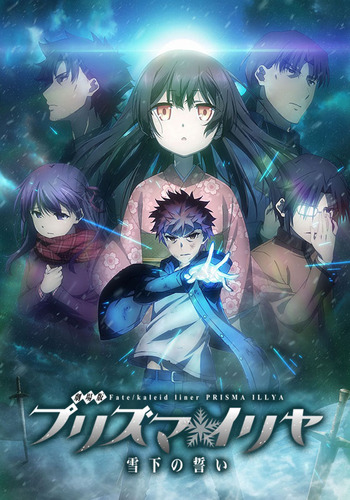 To watch this movie you have to have already seen the prior four season so you know what you're getting into, and I must say, you will not be disappointed, after all, the show always managed to keep the quality consistent. But that also means that it hasn't improved and has the same downsides it had from the start.

The Good:
The Story and Characters are both really good, the darker than usual tone worked wonderfully, and even just the idea of making this a movie instead of just a part of a season was really good. We get to see how things went before the show started and it's all really interesting stuff. Prisma☆Shirou is now arguably the best Shirou we have yet seen. All the character's motivations are clear and understandable, you can see how and why everybody would act that way.
The Pacing felt perfect from the start, they didn't bore us explaining things we already knew about thankfully and only explained some of the little mysteries left unanswered by the show. The conclusion was satisfying (and a little emotional) and it made me excited for the future of the series.

The Mediocre/Bad:
I have to admit that I was a little disappointed in the production value of the show. Seeing how this was a movie I hoped they could have made it a little better than usual, but that wasn't the case. The animations and art style are the exact same as the past seasons, which weren't awful, but also they have never been the best aspect of the show.
At least there are A LOT of new well designed minor characters, which got less screen time than they deserved.
The OST suffered a bit from the tonal shift and could have used a more prevalent new sad track.

The best part of the show is how they can handle the viewer's emotions. Do they want you sad? They'll make you sad. Do they want you hyped and hopeful? Done. Nostalgic of the past? Easy. It's a simple thing that all stories should be able to do, but that many fail at.

TL;DR More of the same from this series, You know if you like it or not. But as a bonus, If you love it, the last scenes will really hit extra hard.