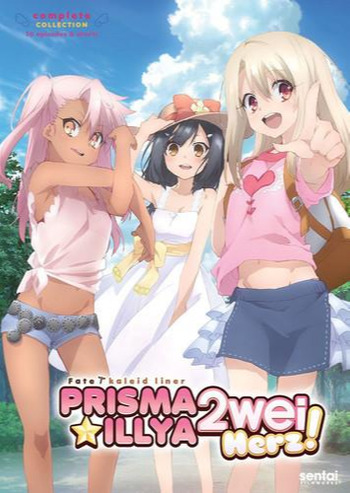 The first half of this season doesn't continue with the story, rather it focuses on fun activities during summer vacation. I always enjoy these settings as they are relaxing and full of comedy. Basically, these episodes are more funny than anything from season 2 and time well spent with all the characters we know. A great way to see everyone outside of the serious environment and just be care-free.

The last half of the season goes back to being serious and focuses on the story of where we left off in season 2.  It is decently interesting then what should be the big moment of action in the last episode becomes really uneventuful as all the epic build up ends in a single shot. We are given a couple of touching lines and somehow everything is over just like that.

The flaw to the story issue is this silly 10 episode focus rather than the standard 12, which hurt the ending of S2 clearly and now feels like it somehow skipped past what should have been an epic fight just to squeeze it into 10 eps. There just isn't any logic or reasoning that can justify this issue.

Aside from that, the summer activities followed by going back to the story till just before the last episode are really enjoyable. All missing points are due to episode 10.

The ecchi/suggestive content increases compared to season 2, primarily noticed during the summer activities early on.

The short preview into Season 4 looks promising with some new additional characters and hopefully more focus on retrieving the 8th card.

Art: It's fine for the most part and it is only when the CGI takes completely over that the quality takes a nose dive. When CGI is used to enhance what is there it is fine but the more it is used the worse it gets.

Sound: No real problems here either. I can't remember any of the music and that is how I prefer it. Voice acting is fine but they didn't have much to work with either.

Characters: Main character is Illya, who is a young girl with a passion for magic girl shows. She loves her older brother, Shirou, a lot....a bit to much actually considering they are siblings. Her dream is to become a magical girl and fight for the right side.

Miyu is a young girl Illya's age who becomes partners with Sapphire. Like her staff she is cool and collected, rarely showing any emotions. Initially disgusted by Illya's attitude she tries to go through the mission alone bet eventually befriends Illya.

Ruby and Sapphire are magic staffs that empower their contract holders with magical powers. Sapphire is cool and collected while Ruby is more happy go lucky. Ruby has a serious magic girl fetish and tries to manipulate Illya in the direction she wants to go. Both do care for their charges and work hard to protect them.

Rin and Luvia are the previous contract holders with Ruby and Sapphire. They were tasked with recovering the cards but hate each other to the point that they get in constant fights together. This annoys Ruby and Sapphire that they decide to break the contract and leave them stranded. Neither is powerless though as they are powerfull mages in their own right.

Bezzat is an enforcer from the magic councel send to retrieve Class Cards. She is very straight forward and goal oriented. She is also extremely powerful.

Kuro is an exact copy that split off from Illya with the Archer Cards' powers at her disposal. She is very powerful in her own right but splitting off also made Illya weaker. She has no desire other than ending Illya.

Story. The series continues on from the seconds season and the girls are now aware of an eighth Class Card. Unfortunately retrieving it will prove very difficult.

Rant. This season has no reason of existing. Not that it is pointless but the first 4-5 episodes are utterly wasted as nothing of note happens. Except Kuro locking lips with some unwilling underage girls of course. We can't have enough of that.

Please do not give me any crap that Illya is willing in any way shape or form. She is all but blackmailed into it and is very much not into any of this shit.

The problem with most of this season is that you can scrap most of it and lose nothing. Season 2 ended with them realising that there is another Card they must retrieve. Season 3 therefore starts with the important planning of a beach trip.

Episode 1 is them planning it and buying bathing suits....that is it. Oh, and Kuro convinsing that she and Illya have to kiss to transfer power. That also takes up several MINUTES of time. Yeah, we certainly needed that as it is important character development.

Next we get 2 episodes of the group going to the beach and we also get another episode of them going to an amusement park. Only silver lining is that Bazzet was actually pretty funny in these apisodes.

It got drowned in the side plot of Illya wanting her brothers dick but who cares, right? Perfectly normal for a 14 year old girl to lust after her older brothers cock, huh? Oh sure, she acts all shy and stuff but she wants it. Badly.

The final episodes are finally plot focused and pretty much all of it is actionduring the final battle. There is some drama with Miyu but this is just to set up the next season.

I would love to see someone take season 2 and 3 and mash them together. Take out the Kuro kissing bullshit and the meaninless episodesand you can get a 10 episode series that is a Hell of a lot better then this garbage.