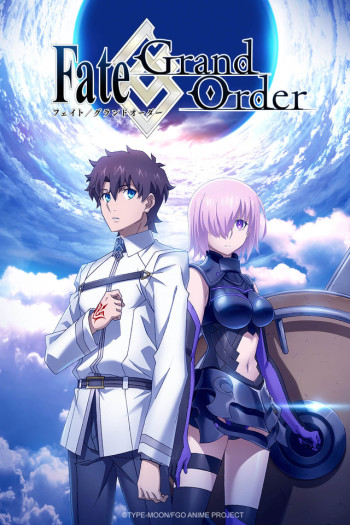 I just finished watching this about 20 minutes ago and I must say I have been anticipating this for a while now and this is one of the anime appearing this year I was really, REALLY excited to see. I must say I was a little disappointed.

For starters I am a huge fan of the Fate series. I've heard about Fate/Grand Order the mobile game and I have always wanted to play it(but I can't play since I don't know Japanese and there is no English version as of now). So when I heard it was being adapted I was very excited.

The story was good though it didn't fully cover certain topics and it left you asking more questions than it did answering them. Though the movies cover most of the basics and introductions nicely.

The animation was good, it wasn't great but it was good and solid.

The characters lacked development and just felt generic. From what I know about Fate/Grand Order it gives you the option of a female or male character(in this case this anime went with the male). I think It would have been a smarter move to go with the female character. It would been interesting to have the main protagonist be female. It felt Like a relationship between Mash and the protagonist was rushed and unrealistic. Another character I want to talk about is Lancer(who is caster in this). He is actually the most interesting character is Fate/Grand Order. Though he did seem a bit overpowered I didn't mind it. Another character Olga wasn't all that interesting, I did kinda like her(only because she reminded me of Rin with her tsundere like personality) but was a bit annoying.

Overall I enjoyed Fate/Grand Ordee: First Order but it could have been better and the potential was there but it wasn't utilized.

Straight up, I've played Fate: Grand Order for years on NA (Global) so I know what will happen, who they are, more than the movie will show and it'll be something else to not show bias. But here goes, for when have I not been corrupt?

Story: This hour is the first few hours of the game, an introduction/tutorial. Sets up the dominos and the foundation while tackling a mini-singularity, hence the short runtime. It's a good beginning, sets up Chaldea and the hub world, the General stuff. Middle and such, it's the singularity. It's not the most engrossing but it's still good in its own right. Fair to good, as we get a rudimentary explanation. But it works well. It keeps moving, has some great fights and by this point, it should be apparent in how it ends.

"This is just the beginning", and it is. But it doesn't leave without dropping some nice twisty bits and charm with the beginning chemistry of Ritsuka and Mash.

Animation: Definite yes. It looked hella gorgeous, fight scenes in particular. CGI in Medusa (?) fight was well blended and looked great, and the final fight scenes, that was grandiose and a spectacle in giant beams and shit. It was clean, not jagged and just general competence.

The character designs are even better. Mash and Fou are adorable, Director is a cutie pie and looks great, Medusa (Name without fact checking) is a hot piece of ass. That is quality design. Alter must mean hawt with a capital HAWT. Long legs, Alter tats, busty and thicc all around. It'll take too long going one by one but let's just say that it's fantastic. And don't worry, there's enough for the ladies too.

Sound: For once, in a while, I have no specific preference. The dub felt competent, better than usual. There was enough emotion and distinction in their voice. Elation, excitement, snoring, sadness. Same is probably said for original Japanese. Watched it dubbed as I was lazy.

I have nothing to say about the music. It was good, suited the mood.

Characters: First off, Gudako. That cameo was everything. Best Easter egg for those that played the game. If you didn't, disregard this. Otherwise, you get names, not much background, character traits, possible quirks but that's looking super deeps and probs into the future- for an hour, it's pretty good. Some bias here but the classes represented and their respective... representatives, are to my liking.

Overall: This can be closer to a 6-7 but I really enjoyed it. Quick, nice fights, memorable characters and designs and while it isn't deep and it can't go into the nitty gritty of the world, it's a solid start and entry to the series. A trip down memory lane and as such, resonates with me more than someone going into the Fate/Grand Order franchise for the first time.

So lets get right to it!

I have NEVER played the games, and have no desire to, and someone had pointed out that this is related to the mobile games. So if I write more reviews about the FATE series, just know its based off the anime alone.

Lets start off with descriptions of everything going on (SPOILERS AHEAD)

Story:
Story was easy enough to follow. Though I dont really understand the sciency stuff FATE seems to have going for or magic science or whatever. Its a bit complex for me. HOWEVER, the story was easy to keep up with, the purpose behind Chaldea was very easy to understand, and why everything was happening was also explained well enough. The only questions I really have left are 1: Why did Saber go evil? Was she actually evil? and 2: Why is Professor Leff evil? Why is he trying to destroy the world? Seeing how this movie and others related to the "Grand Order" series will most likely follow the mobile games, I feel like if I gain access the the rest of the anime that follows this movie, then I will have the answers to some of my questions

Animation:
Of course I'd give it high scores! Its a FATE anime. Although thats not for ALL fate series... *Side eyes Last Encore* In my opinion of course. And as always I look super forward to the fight scenes. It did NOT disappoint! I dont know much about the studio this round, but I enjoyed all of the special effects and fluidity that was shown

Sound:
Bout as typical for an anime as you can get, I didnt catch anything lagging or anything bad. I dont really know how to rate this as I dont usually find fault with sound all that often in my anime that I watch

Characters:
Lets go one by one
Ritsuka: Honestly? Kind of forgettable as a main character, heck I cant even remember his name 90% of the time cuz its almost NEVER said. Doesnt help that I have a poor memory but ya know? Hes not really all that good and is kind of pathetic, gains ground in the last fight, etc. Typical character spheal right?
Mash: One, I LOVE her name! Two shes a hybrid of a human and servant? Thats possible?? Can we PLEASE get this explained???? Also does she have a thing for Ritsuka or is that just me? And she also had just a bit more personality than our main protagonist as well, but not really by much. IDK I loved her more than Ritsuka anyways.
Romani: I like him! Hes goofy but dependable and just feels like a fun guy to be around. Also his hair and outfit have nice color contrast lolz
Olga: I really didnt care for her at first, but I think thats intentional, you then start to side with her as she takes a backseat of our protagonist duo, which was nice, she felt like support. Not overbearing but a complete ass at the same time. Her end though? OOF. That... That was cruel.... I just... Yeah no I feel bad for her now....
Caster: I was watching him, recognizing the voice and then realized, HOLY CRAP THATS LANCER FROM ONE OF THE OTHER FATES! And as he "dies" he asks to come back as Lancer :/ Like. I knew this. BUT WHY WERE YOU IN A MOVIE YEARS AFTER THE ANIME CAME OUT??? Fate and their order of what to watch is still terrible I see. But I digress. Caster was awesome and fun to watch. He was witty and fast on his feet and a good support when needed. Sad to see him go at the end but rules be rules

Overall I do hope to continue this series of FATE as it fits the FATE I know and loved with the original series. I am honestly curious to see what the next, what was it, seven? Irregularities hold and what kind of servants they will run into next. Also how many more Saber (King Arthur style) are we going to run into? There are so many of her now XD

Good service for fans of Lancer, but there's not much substance here.

This is basically the anime equivalent of a bland video game's tutorial level. Heaps of meandering exposition, rapid-fire character introductions, forced drama, and protagonists who are so devoid of personality that you could replace every one of their lines with "Don't give up!" and not affect the plot in the slightest.

What will make or break this are your feelings on the character of Lancer from other works in the Nasuverse. Thoroughly making up for his unfortunate fates in a prior Grail War, he's heavily featured in every single encounter - and it is glorious. 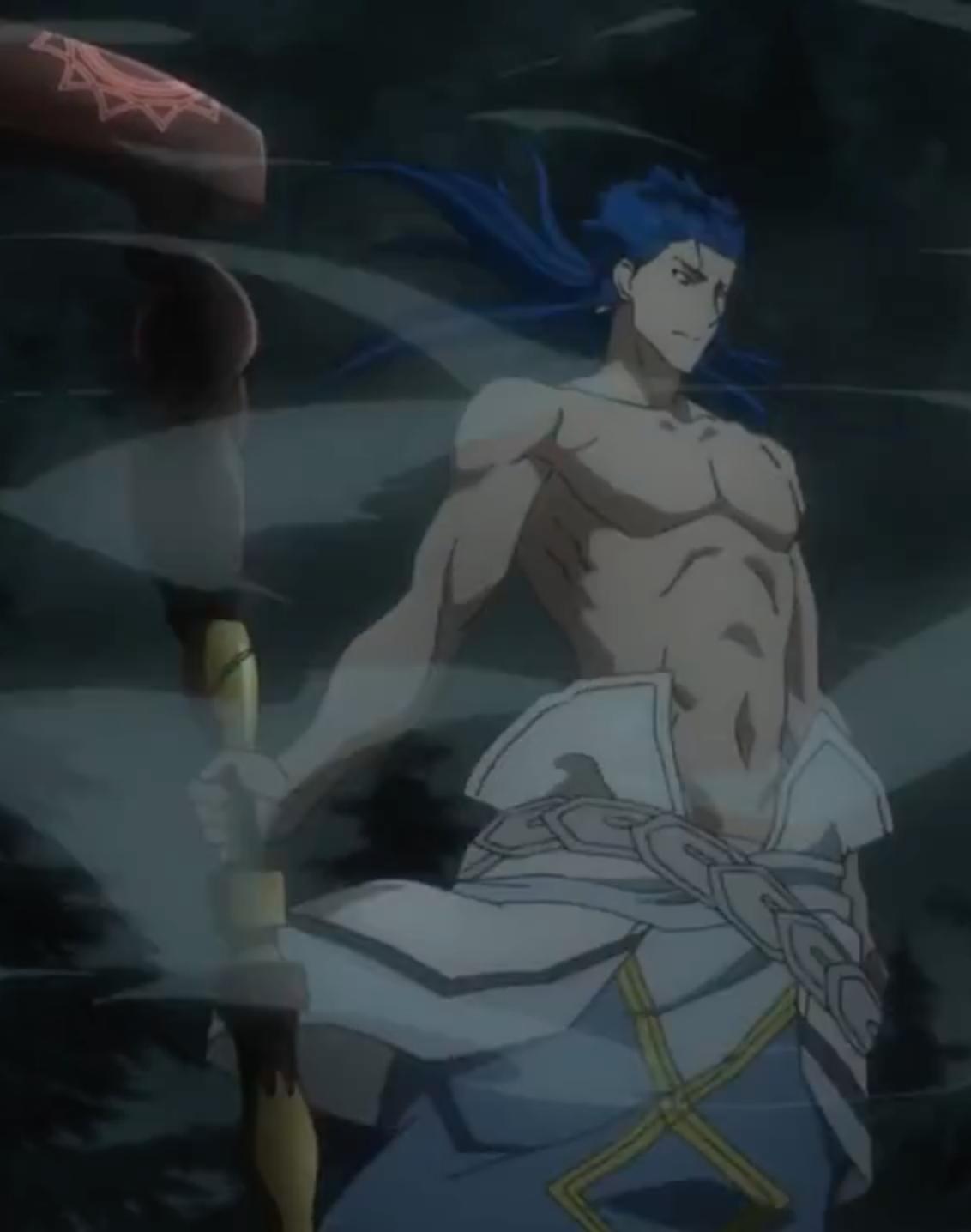 some claim that even his abs are chiseled runes of power

However, if you're unfamiliar with anything else in the Fate/ series, there won't be much here for you apart from a couple of neat fights and some interesting character designs.