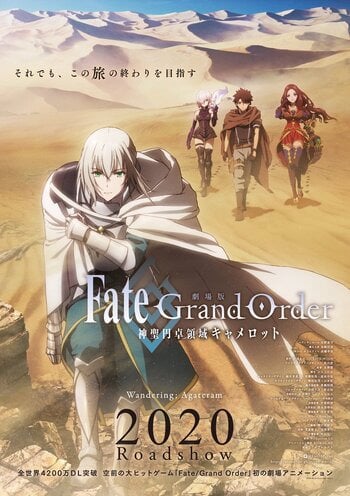 After watching two anime from Fate/Grand Order, I wasn't particularly too interested in watching this. However, the fact that this was a movie and not a full-blown series, actually makes it worth watching. Let me explain how.

This movie is the first part of what is probably set to be a trilogy that deals with the singularity born into existence in King Arthur's era where the King, for some unknown reason, is being a tyrant and has invaded and captured Jerusalem on a holy crusade. What's more, is that she is now killing people in the name of her religion. Our heroes spawn into the dimension with Da Vinci looking to settle the score and get the new Grail but what they find is beyond shocking to them and the only way to resolve the singularity is by taking down King Arthur and the Knights of the Round Table.

They have toned down the violence in this movie quite a bit, and the art and animation is quite superb. However, why I personally consider this movie worth watching as opposed to 'Babylonia' is simply because of its direct and to the point nature. Fate/Grand Order in itself doesn't have too much content. So collapsing it into a movie like this keeps all the filler-like stuff such as the slice of life aspect out of it.

There is some rather impactful content displayed in the movie and the scenes have a hint of abstraction to them. The introduction of a few new characters into the tale add some depth to it while the three factions involved in this singularity make for a much more exciting narrative. They also actually gave Fujimaru a bit of character for once. The tale also makes you want to pick a side in the battle as well.

This is pretty straightforward and direct to the point. And the causes they fight for and their motivations seem much clearer and moving. They might just save the Grand Order franchise if they make the rest of their Anime like this.