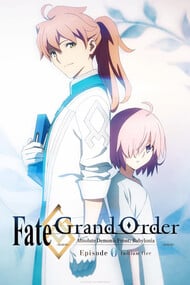 The year is 2010 AD. Romani Archaman has been posted to Chaldea, where he becomes the primary doctor for a young girl. Mash Kyrielight, Chaldea's second successful summoning experiment, is interested in the word "Senpai."

Story: I am not very familiar with the “Fate” series outside of Fate/stay night TV, Fate/stay night: Unlimited Blade Works Movie, and Fate/Kaleid Liner Prisma Illya TV, which I think are all good in their own ways. However, I watched this under recommendation, and I must say that it is surprisingly more entertaining than I expected, but confusing as heck. To sum it up quickly (to the best of my understanding), Dr. Romani Archaman is hired at a facility known as Chaldea. Eventually, he becomes the doctor for the genetically engineered being, Mash Kyrielight. She is created to be a vessel for what is known as a Heroic Spirit, which practically means she is a test subject for inhabiting a summoned historical hero, or servant, that the entire Fate series revolves around. To be fair, most of the confusion in the storyline comes from not being more involved in the Fate series, which is part of the grander Nasuverse. Without any real back history, I do not know anything about Chaldea nor many of the characters that are affiliated with it. Furthermore, a 27-minute episode is not enough time to explain it to other that are like me, so keep that in mind is you choose to watch this without any prior frame of reference. On a positive note, the story was still interesting and engaging enough where I am now curious about more of the Fate series, at least where Fate/Grand Order is concerned. This episode had probably no more than 1-2 minutes of filler, which was only used as flashbacks to try and tie in this episode with the remainder of the series. Excellent job there. Animation: Nice and fluent with very good line detail. The color pallets used is a little limited, but then again it takes place in a science-type facility out in the middle of an arctic winter wonderland. Still, the quality is good in both art and animation. It is very promising for the rest of Fate/Grand Order. Sound: No complaints here. Not much really happens that warrants any special audio or sound effects, and what little does executes it adequately. Characters: The development is on the weaker side, even for Dr. Archaman and Mash. Romani is an intelligent and caring person who is very interested and concerned for the limited lifespan of Mash. She, herself, is a rather stoic-like character with a shrouded backstory that lies in mystery. These two are both the main focal point of this special episode 0. The other characters that get any kind of screen time are practically insignificant, except for perhaps Marisbury and Leff Lynor. There two characters add to the mystical bewilderment regarding the Chaldea facility and the entire Fate/Grand Order series in general. Overall: This episode is going to be confusing if you know nothing or very little about the Fate/Grand Order storyline of the Fate series. It is not something I can recommend because of that. However, it does succeed in making more curious about the series as whole. It is interesting and entertaining enough to at least do that, which is good thing in my book. ENTERTAINMENT SCORE:  6/10 1️⃣Weighted Average System Score: (9 + 8 + 6 + 9 + 12 = 44/100 points) Additional Information: Video Format:  HD Streaming Audio Format:  Japanese audio (with English subtitles) Publisher:  FUNimation Equipment Used:  Lenovo TB-X103F Tablet (with Dolby Atmos)

Roman is Mash's dad: the anime. If you want any of this to make sense, play through the game, at least up to Solomon to understand what's going on. I f you know what's up, it's a much better watch. I love the montage of Roman's struggle to get into Chaldea, trying desperately to avoid the future he saw for the world, and I love how this shows how much of an impact Dr. Roman has/had on Mash as she tries to learn what it means to be human. The other montage of Mash's journey through the Singularities, combining her thoughts and the lessons she's learned from the heroic Spirits along the way, combined with "Shikisai" is absolutely unforgettable. 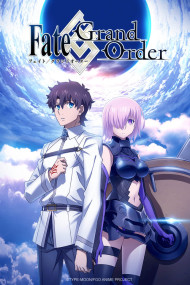 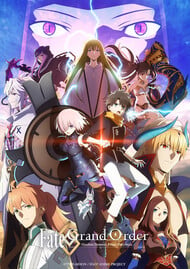