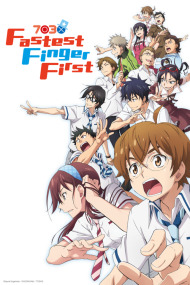 Don't You Want to Become a Quiz King?

If You Want the Right to Answer /

...Their Past Quiz Questions

Q: Why Do You Answer?

A: Because the Question Is There!

Positive *If you saw my Summer 2017 preview that I did 3 months ago, you remember that I described the, than upcoming, Summer season as a season of new concepts. There were a lot of anime’s coming out with concepts that I hadn’t seen before. And NMSB was one of those. I personally had not seen an anime before where quizzing was the main theme. Anime’s about card games that I had seen before but pure quizzing was something new. So, you will hear this again in some upcoming reviews, I will always give extra credit to anime’s who go outside the “comfort zone”, who go away from the “normal” anime themes and try something new. For a video review, check out my Youtube channel. Link on my profile page.  *And going further on that, they didn’t choose the easiest theme with quizzing. Actual physical sports contain way more excitement of their own and are therefor easier to adapt into an anime. *A second positive point was that , as I pointed out in my First Impressions of this anime, I could immediately guess that this was a TMS Entertainment anime. It had the same atmosphere, the same use of inner monologues and the same decent animation that I’ve seen in other TMS anime’s. NMSB had very solid animation, nothing too spectacular but the animation was very clean and solid. I didn’t notice a single mistake or roughness in this anime. Negative *Now the main issue with this anime was that it was way too short to reach its full potential. Competitive based anime like NMSB need way more time than 12 episodes to grow. Look at other sports anime’s: Yowamushi Pedal going into season 4, Haikyuu 3 seasons, Kuroko no Basket 3 seasons. All these anime’s got lots of time and a sports anime needs that to make the characters grow.  Now, especially Koshiyama, hasn’t had real development. He grew slightly in the understanding of the sport quiz bowl but he still has so much hidden potential. Maybe we will get to see that in a second season, that will depend on the popularity of NMSB cause look where YowaPeda is now. *Something that I briefly touched earlier was the excitement. I did feel that NMSB was way less exciting than other sports anime. With an anime like YowaPeda I could sit on the tip of my seat of anticipation because it was so exciting. True, that’s also partially because I’m a cycling freak, but there was so much more adrenaline flowing in that anime while NMSB was a very composed anime. There was never a real thrill imo. *And a final thing that I want to mention, I don’t know if this was ever a goal of the anime so I’m just going to throw this out. One of the things that is key to quizzing is that you learn stuff, before and during the quiz. In NMSB you didn’t have the chance to do that. Questions were racing by so fast that picking anything up was really hard. But this is pure personal statement of mine since it could perfectly be that that was never even a goal of the story. Conclusion So as a conclusion, NMSB was a new take to the competitive anime genre but it missed a bit of excitement and adrenaline. Also it was way too short to give any proper development to our characters. This is an anime that would need, at least, another one or two seasons to really reach its full potential. So that’s why I rating Nana Maru San Batsu at 3 stars. If TMS makes a continuation of this anime, I would happily follow it and who knows if it will become a new hit anime. I don’t think anyone expected YowaPeda to become as big as it is today.

I picked this anime up because it was an anime with a sports feel, except it had a twist:  The "sport" was a Quiz Bowl. I'm always looking for anime which break the "norm", and though the concept of this anime certainly did so in focusing on quizzes and knowledge over physical prowess like most sports anime, the execution wasn't quite up to par. Story The plot follows Shiki Koshiyama, a shy bookworm boy who doesn't have an athletic bone in his body and has never felt he belonged in a club due to that.  After entering high school and being selected at random to participate in a demonstration for the Quiz Bowl club/circle, he eventually joined them and started to learn the world of competitive quiz competitions. Characters Shiki Koshiyama - As said before, a shy bookworm with an uncanny ability for reasoning, deduction, and knowledge.  He has a natural ability for the way quiz competitions are run, and possibly has an eidetic memory since he can recall passages he has read from various books dating back to his childhood. Mari Fukami - The female of the school's club/team, and a quiz bowl fanatic.  She got into it due to her older brother. Gakuto Sasajima - The mysterious upperclassman who formed the club at the school, and recruited Mari (as well as Shiki and another classmate who excels in math named Daisuke).  He's eccentric and also loves quiz bowls, though he seems to have some mystery in his past and slightly better social skills than Mari. Chisato Mikuriya - A first year like Shiki but from another school.  He's rough around the edges and also has a natural gift for quiz bowls just like Shiki.  He seems to look down on people, but is always striving to get better and acknowledges Shiki's prowess.  As such, the two become friendly rivals. There are other characters, but they either aren't as important, or would include spoilers as they appear later on (such as Akira, who plays the part as the antagonost a little bit). Overall It's an interesting glimpse into the world of quiz bowls and competitive quizzes.  The only quiz shows I've ever seen were the old Nickelodeon ones and things like Family Feud, which didn't involve the strategies shown in this anime. The anime can either be a relaxing and amusing way to spend time, or an intersting way if you try to answer the questions as well (be prepared; it's difficult at times).  Sadly, it can also come across as quite boring at times as well, and sometimes the characters talk so fast during the quizzes that even the subtitles have trouble keeping up. Another issue is the entire character of Mari...as well as her voice actor.  While I believer her voice actor does fit the character, the character is one-dimensional and boring for 3/4 of the anime.  There are only two times we see her grow a little (technically three as she learns about being a team as well), but her character is otherwise flat and nondescript...which is disappointing since she's the female lead. The anime also makes the mistake that a lot of sports anime does, and that's introducing a ton of characters all at once (usually rivals).  Although we only really learn about two or three of those new character introduced, that's on top of the protagonist and his rival, and those new characters were introduced all at the same time on different teams. I can't even name every single character, or even all the schools involved, due to the sheer amount of characters dropped on us at once; first with some amateur quiz show at the beginning, then moving onto the regular meet where new characters came out in droves. It's one thing to introduce a rival or two, but it's another to introduce a ton of new characters in one setting.  Many times, I was going "who was that, again?" in regards to them. Another problem this anime has is the pacing.  Though it's fun to watch Shiki get better and learn the rules of the quiz bowl, he's still a beginner.  The anime does take that into consideration, but the last episode leaves off talking about an even higher level of competition than the one he had just been in; a national level. Excuse me, but this is a character who just recently learned the freaking RULES and common questions.  I'd rather have seen some more character development (including how he gets along with his teammates; there is a little here and there, but not enough to really call it character growth) and have the anime put off the bigger competitions as he slowly builds up. Their club (which is technically not a "club" because they only have four members) has two people completley new to quiz bowls (Shiki and Daisuke), and a flat female protagonist who needs to grow as well (Mari).  It feels a little rushed to suddenly throw them into the level of the regular meet, and hint at a national level. There was even a cliffhanger in the second to last episode which was totally unnecessary to do; yes, it often occurs between final episodes, but in order to get to the cliffhanger, the episode was drawn out to the point where there were obvious stall tactics being done so they could end on a cliffhanger. Again, it can be a fun, relaxing anime (saying you're not trying to solve the questions along with the characters)...but it's lacking in many departments. 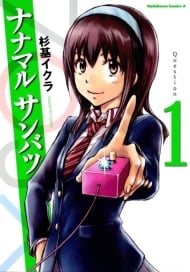