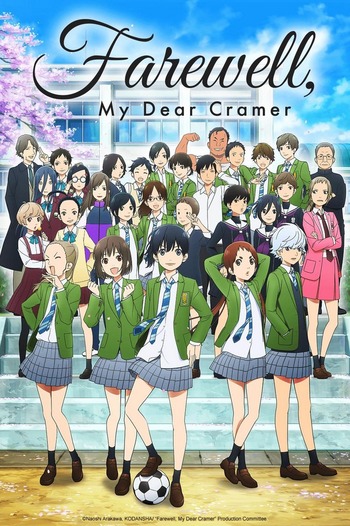 Female-centric sports anime are hard to find, mostly because they focus more on the fanservice than the actual sport. By all accounts, Farewell, My Dear Cramer should have been the glitch in the sports matrix because it actively goes against all the fanservice bits and aims its focus more on football, its impact on its female athletes, and the bigger picture of Japanese women’s football. That’s what you get at the start and for a while, it begins to look promising. But as the story progresses, it starts to give the impression that these big ideas were mainly just outlined bullet points that weren’t filled in properly. The goalposts are there, but most of the trouble lies in getting from one end to the other.

You can tell there wasn’t a lot of budget put out for Cramer because its gameplay animation is virtually non-existent. So to make up for it, you’ve got characters from all sides providing excess, unneeded commentary that often goes round and round in circles. Everyone repeats each other and it’s the same faces of shock every single time no matter what happens, but what really hurts the show here is its stagnant set of main characters.

There are three main characters and one main annoyance on the Warabis, the underdog school so low in the rankings, they’ve already run out of barrel bottoms to scrape years ago. But they’ve got heart, even if they’ve got their quirks. They’ve got the talent, even if you’re not sure if everyone else on the team is the same. That’s mostly the way these story arcs go, and save for the interesting backstory of their disillusioned coach, they end up looking the same and almost redundant with how often they’re brought up again and again. Besides your three main characters and one main annoyance, there’s practically nobody else on the Warabis worth taking note of.

That’s all such a damn shame, too especially since Cramer looks extremely good and interesting on paper. It’s just that its execution is more than a little lacking and its characters are mostly just there to let the story happen through them. It’s not entirely boring, but it is disappointing. It’s got missed potential written all over it, but if you absolutely had to get into a female-centric sports anime, then you could certainly do much, much worse than Cramer. Just don’t head into it expecting something revolutionary, however.

The Anime is for u if!

-Care more about the enemy prodigy

The animation is very simle, the excecution of the games is slow and very plain. It's focused around the issue with Woman Soccer in Japan.

The key word for this anime is "alright", like it's not great, but it's still soft, silly and warms your heart sometimes. Definetly enjoy female representation in sports without the creep sexualization of teens. As for the characters, it's normal that they are kinda annoying or stupid, that's how children and teens usually behave. Also it's not as dark and deep as many sports anime that came out in the past years, and that's nice.

Of course, this anime could have been better if more money had been spent on it. But I have no complaints about anything other than animation and secondary characters getting more background than the main cast.

Such a pity that we'll probably never see 2nd season of this.