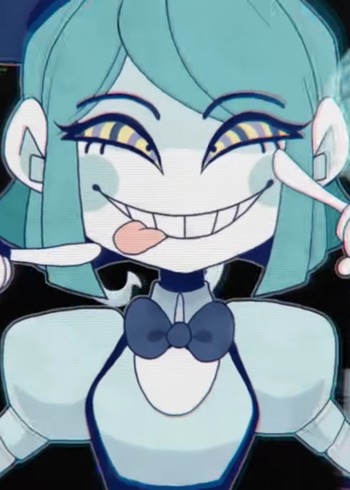 The land of the dead is a heavily bureaucratic place full of paperwork, and it is the job of the shinigami (death gods) to ensure that the dead stay dead and in their assigned locations. Tsuzuki Asato is one of the longest serving shinigami, but is somewhat flaky and difficult to work with. He is assigned a new partner, a rookie shinigami named Kurosaki Hisoka, who seems to be the complete opposite of Tsuzuki in personality. As the two begin investigating various cases they become entangled in the plots of the mysterious Dr. Muraki Kazutaka who seems to have something to do with Hisoka's past. Life is never dull in the afterlife as Tsuzuki and Hisoka deal with Muraki's antics, their growing relationship, and Tzusuki's own dark, mysterious past that continues to haunt him.

The world of Earth, and the world of heaven, are separated by the clouds. Rinne is one of those who lives in heaven. Then a wild fire that no one can put out in heaven, where it never rains, happens. Rinne is determined to put it out, but accidently trips and falls to Earth. The fire is still going strong in heaven, and Rinne has to figure out how to put it out.

Thaddeus and Mercutio are guardians in the Afterlife, maintaining the peace in this strange world of the dead that gets more crowded every day. As the population reaches its limit, the organic mass that is the body of this world begins to show signs of sickness and decay! The inquisitive Thaddeus yearns for an answer to it all, much to the chagrin of his best friend Mercutio, who is consumed with the need to find his one true love, Arabella.

A Love to Light the Afterlife

When an accident suddenly claims Chiaki's life, his best friend Sousuke is left to wallow in grief and regret. While on his way home, Sousuke walks over a railway crossing exactly on twilight and finds himself in the Afterlife, where he finds Chiaki's spirit. Determined to be reunited with and resurrect Chiaki, Sousuke makes a wager with the Afterlife ruler, Lord Nushi. Will he succeed?

When I was spying on her sex scene, she laughed and killed the other man. Kana-san, an older busty beauty. I don't know how old I am or where I am from, but I'm such a kind person who goes out with her. I was satisfied with that alone. One day, I was worried about Kana-san, who wouldn't let me have sex, and I eavesdropped on her. However, I will soon regret it. I may be killed if I have sex too. However, I really like Kana-san ...

Based on the poem Divine Comedy by Dante.