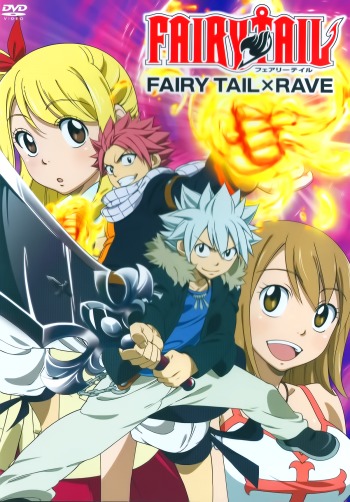 This entire OVA is essentially a joke about how Hiro Mashima has no originality in his characters. Basically the main casts of Fairy Tail and Rave meet up and have moments like this:

And everyone fights an enemy together, becomes friends, is on their merry way. Not a bad story, but not especially interesting either. In general, I found the OVA extremely childish, with its gratuitous fanservice and potty humor. When a character outright says "Sexual harassment is bad" (no joke, this is a real quote) immediately after a perverted character offers a breast massage... I can't help but feel too old for this.

Personally, I have only seen some of Fairy Tail, but the laughable similarity of the characters in Rave make it easy to follow along. As usual to Fairy Tail, the characters range from tolerable to borderline annoying. In this short, they mostly show their "comedic" side, so they don't show much substance.

As usual the Fairy Tail OST does not disappoint, and the only gag that actually made me laugh was sound-related. The visuals were below average, and I don't remember enough about Fairy Tail to compare it to the main show.

I watched this as part of the AP Bingo Challenge, specifically this out of nostalgia for the OST. I would not recommend it to anyone nor would I watch it again.

Unfortuanetly I have not watched or read Rave Master. But the simularties between the characters is obvious. This is a great ova with a little sneak peak to the kind of powers to one who may not have seen one or either of them and get them to want to watch the anime.