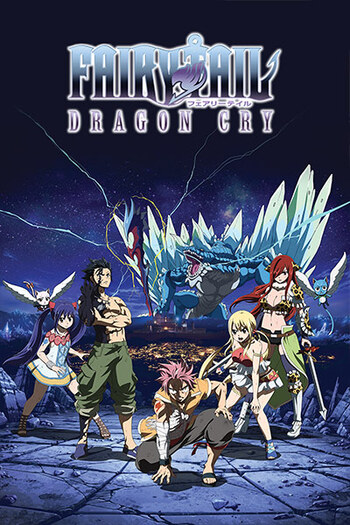 Hi there everyone im Dion and i'm your host for the evening.And with no further ado let's start our little journey down the Fairy Tail street.

Well it's been a long time since we got something new from this franchise.And at long last we got some news of a movie called Dragon Cry and boy did everyone scream with joy.I understand your feelings cause i too was waiting for something new to sink my teeth in until the final season.So is it any good?Let's find out shall we and i promise i'll try to keep it spoiler free.

And we start with some very good news.You see most new movies begin with scenes from the series.I get that they want to remind us what unfolded before the movie but come on guys,some of us might be old but no so old to be near Alzheimer's doorstep.When i see a new movie i want to see a new movie not some scenes i've already seen,what's the point?Keep the damn thing for the series or shove it up your ass.In that aspect FT does a very good job at keeping things seriesscenes free.The story takes place post Tartaros and pre Alverez.This means that we get to see all the new powers our cast has gained and sure enough witness what powers they'll gain by the end of the movie..Come on this is a shonen anime what did ya expect?Deep soul searching moments,dark twists and turns?This is all about shouting angrily,fists and kicks and some magic shit.

Storywise read the synopsis and you'll get the idea and since i want to keep it spoiler free for those who haven't watched it yet i won't go deeper than that.Let's just say that things aren't what they look and you're in for some surprises near the end of the story as to who the real players are.So our band of Fairytailers go on a mission to retrieve a staff called the Dragon Cry which is said to possess such raw power that it rivals a supernova explosion.And said staff has been stolen by a traitor called Zash.Things happen and yada yada yada some shit happens,some people die and that is where our lads and gals leave for a strange land to get it back and save the world once more.Sounds normal right?And normal and more of the same we get for the rest of the anime.

Now i should stress that as a movie if you compare it to a previous attempt called Phoenix Priestess this is a huuuuuuuge step up.Phoenix felt much distant to the series,it lacked passion and soul.It was FT but at the same time it wasn't.This is definitely more meaty it has that spark that was absent in the last movie.Granted it's FT going through the motions from start to finish.And while many people,especially fans will find that alluring i'm afraid i didn't.I'm not daft i know it's a movie and as such things HAVE to go at the speed of light and it was bound to have many plotholes,many things left unexplained and things happening leaving the viewer scratching his head.But it left me with the impression of a much bigger more flashier filler arc.I can't put my finger on it as to why i'm left with this impression but that was what it felt like to me.Sure in the heat of the moment and amidst all the excitement everything was sweet and nice but after the excitement faded and with a clearer mind that is my final verdict.

Let me give you an example without spoiling it.We get some new power up from Natsu,a much awaited one at that...And we only get to see it for 20-30 secs.That's it.The one thing people wanted to see was 20 secs worth of screen time.And do you remember a certain someone saying that this movie has many connections with the Alverez arc?We are shown this connection at the very end.Nothing in this movie is used as a force to propel the story towards the grand finale.That's why i said it feels like a filler arc more than a movie and one that connects us to the finale.

Enough with that though let's see what this new addition brought in terms of animation.The animation while not something great it was very pleasing to the eye.It was FT with some added spice.The world building was absolutely magnificent to behold.The character designs were also very nice as well.Now this being a movie i expected to see perfection.but perfection wasn't exactly what i got.In fact there are moments that the quality drops from a cliff faster than a barrel.The movements while upgraded to some extent there were times it was jerky.But it was far from ruin your experience bad.

Music and VA's were just as good as ever.But it's the same stuff you get in the series.Nothing new.

Characters?Well apart from Natsu and the rest of the gang we have our new villains.Don't expect any sort of big badass villains that are being utilised ti the full.To do so the movie would have to be double the bulk.Which is a shame cause it would be very interesting to learn more about Zash and Sonya.There was also a trio of fighters who gave the gang some trouble but not enough that a sudden power up from nowhere can't deal with.As to the main event bad guy?Let's just say that it was so anticlimactic it beggars belief.Can't say more just please watch it and see for yerselves.

As for the rest of the cast Lucy and Erza are as always the almost naked mascots of FT.The fanservice is there all right but not in such an invasive way that most reviewers are making it to be.The one thing that i really didn't like was the lack of screentime some characters get like Juvia,Gajeel and Levy.Come to think of it almost 90% is all about Natsu and the rest is for the rest of them all.

Overall while there were many issues with this movie and issues i can't explain without spoilers i enjoyed it,even though it was mostly pointless and something to keep the fans happy and keep the hype train rolling as we fast approach the end,but still enjoyable.Did it rock my world?Nope,not even slightly.Will it make people who haven't watched FT at all join the band?Sure,why not though i won't be betting for it.

As i write these lines i know there will be an angry mob outside my house ready to nail me to the cross.But remember that different opinions exist and understand why different opinions are important and why we as a community need to protect people's right to speak their minds freely and especially when we don't like what is being expressed.That said if you don't agree with what i said please keep it civilised and don't behave like spoiled kids.

Review written while headbanging to this tuneMonster Truck - Why Are You Not Rocking?

I LOVE FAIRY TAIL! That’s just the truth. The animation was amazing and modern as ever, in my opinion better than the anime. The characters had a great build up in the movie And it paid off well showing how much they really had grown up. The English voice actors were surprisingly on point for the characters in the movie which I felt made the movie ten times better for me (cos I’m British :3) Overall everything was great, I wish the story could have linked to the anime a bit more but I can’t be picky! I totally recommend it and the series it’s self! I love hiro mashina’s work and can’t wait for the next season to begin!

I love the story plot and characters. Each character is unique and stands out in their own way. This movie is great and I wouldn't change a thing about it. It was very fun to watch!

This was amazing ! Fairytail is my absolute favorite anime of all time so I knew I would like this !

the new characters were interesting and different as always!

i hope that the last Season will be as good as this or even better!