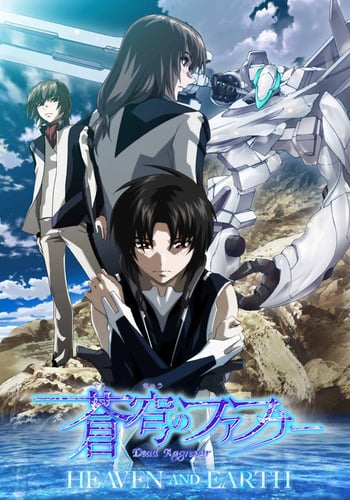 Remember everything from the series? Then you pretty much know everything that you knew before.

For being created so many years after the original you'd think the movie would be something new, a triumphant return for the series, but it's basically an extra long episode written just like the others. We get to see how things have changed in the few years since the final battle, the pilots growing up and the effects assimilation has had on others, but nothing made the story something you need to watch.

And as if the series didn't need to copy more off Evangelion, they went religious with a Jesus angle where Michio and Yumiko's child is considered the savior of the island due to her miraculous conception.

The whole movie really is an excuse to have a pretty good battle scene, but nothing more.

While the character designs and enemies didn't change, everything got that feature film sheen. The scenery and coloring of the original series was it's strongest attribute and in the film it didn't disappoint. Everything kept it's great look, but to have a feel of a movie they muted down all the colors and stuck to a warm pallet. You can feel the gloom the island is feeling, be it out in the skyless world or deep underground in ALVIS.

In the series I commented that they put together an all star team of voice over actors, well in the US version those actors apparently went to hide in a bunker in order to get away from this film. Almost every character had a new voice that didn't fit them as well as the originals. They could use the excuse of some characters growing older, so their voice changes, but even the older characters got new voices.

The background music was still done very well and the lyrical songs were still done terribly.

From the start the characters were pretty crudely thought out and not well developed, not much changes in the added hour and a half. Some characters have settled into their new life, which gives you a glimpse of how things might have been before the invasion, but when they get the chance to build on it they instead just go off onto something pointless.

The new pilots are built almost as carbon copies of the crew from the original series, while the original pilots have fallen into the roles of those who died off.

I think the problem with the film is that it's 100% pointless.

Had it been a bridge between series I could see it making sense, same as if it was a wrap up, but instead it was just there with nothing to add. Had it been a legendary series like Trigun, Evangelion or Berserk I can see why they'd want to come back and add more to the story, but I'm not sure anyone was clamoring for a followup to this so so knockoff.

Ok, so this will be extremely quick.  I dont have much to say.  this is a continuation of the series.  The only reason I watched this is because there is another series out it seems.  Now while it is a continuation, it is by no means bery good.

The story, kinda sucked.  It was too touchy feeling and "oh the pain" and "we must work together and coexist" crap.  That plot alone is not bad, its the lame cornyness and unrealistic nature that accompany it that are bad.

The Animation was spectacular.  I loved it, I could tell they put a lot of time into it.  However this was the only thing that I though went well.

The sound was the same as the series, nothing special or new or even very cool.  Just the same lameness.

The characters pissed me off.  Well. . . . not all of them, mostly Kazuke and the new phestum, and Soshi.  The rest were good.  However when the three characters I mentioned had a conversation, none of it made sense.  It was corny and unrealistic as hell and stupid.  Being unrealistic in an anime is not a bad thing, unless you become unrealistic to a fault.  I couldnt make sense of the bullsh*t they were talking about. Not good.

Overall, barely watchable.  The only thing worth watching was the animation.  Not the story, not the characters, not music.  lame.