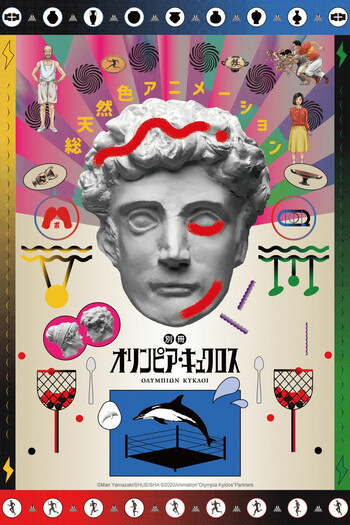 “Sekkou Boys” is a four member boy band whose members are all idols, literally: the group leader Saint Giorgio, the original celebrity Medici, the multitalented Hermes and the lover Mars. However, the only catch is that they are all stone busts! The anime depicts their story of making it as a boy band with the support of their fresh-faced manager, Miki Ishimoto, who has only recently graduated from college.

STATUES <3. The 2 anime are really similar. The characters are inanimated images, and they will make you laugh for sure.

Both anime are hilarious comedies without the traditional anime drawing style. They both have short episodes and non-human characters. If you're looking for something short and funny to enjoy on a quick break, kick back and relax with these.

In ancient Rome, renowned architect Lucius is down on his luck. He has been fired because his style of buildings is unfashionable, and all the bathhouses in the city are noisy, boisterous places that no longer prioritize relaxation. To get some peace and quiet, he sinks below the surface of the water, the only place where his fellow bathers' chatter can't reach him, but a powerful drain pulls him into the depths! Upon emerging, he finds himself in a vastly different bathhouse, and though the architect believes it's just the slaves' quarter, he's actually been pulled through time to modern-day Japan! Now, armed with knowledge of these strange new baths, Lucius is determined to restore his reputation and revolutionize the Roman bathing culture!

Shouko Azuma is a high school girl living in Chiba prefecture. When worrying about her future and college at a riverbank, her phone strap becomes hot with a mysterious light, forcing her to drop it and the cell phone into the water. From where the phone fell, a light from the river sucks her in, and she is sucked into the world of the classic story, Tenpou Suidoken. There, she meets the handsome Sasagawa no Shigezou.

Through the seasons, the kids of class 5-2 manage to keep themselves entertained, whether they’re searching for summer pill bugs and attempting to find a way to race each other at the pool, or mourning the tragic end to “Leaf Satou-kun” when he falls off the balcony. But while the cold winter snow encourages vicious snowball fights, the warmth of spring brings about a change of pace in everyone... well, almost everyone.