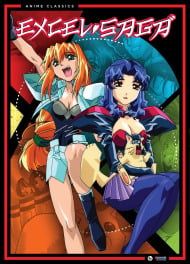 Story"Are there any questions?""I've got way too many, but I'm not sure they're questions I should even be asking..."And that, ladies and gents, sums up Excel Saga (to a tee) in its own words. If you're like me and a fan of random humor, this series will go down in your books as one of the greatest anime you've had the fortune to set your eyes upon. While not the funniest or most clever comedy to be produced, it boasts an incredibly unique flavor that you will either passionately love or fervently loathe.The core of Excel Saga's humor revolves around a number of individual storylines that loosely tie into each other.  These include:The ventures of Across with Ilpalazzo, Excel, Hyatt, and Menchi in their quest to conquer the F City, F Prefecture.  Pedro, the immigrant Mexican worker to Japan with an adorable son and sexy wife, and his struggles against Gomez.Nabeshin, resident director and epic superhero who happens to have deep connections to every event that occurs in one way or another.The city service crew headed by Watanabe and their attempts to purge the city of all evil.Menchi, the cute little dog who can't seem to escape her fate as Across' emergency food source, and her longing for freedom.Many random others who make appearances throughout the course of the series.Trying to predict the direction the series will take is virtually impossible.  Even with a repeating theme such as Excel being dropped down a hole, each occurrence is distinct; something new always happens when she hits the bottom, ranging from wrestling alligators to popping out of manholes in American sewers.  Yet, oddly enough, everything flows together with a surprising level of coherence -- it's incredibly hard to get lost despite the constant chaos flowing across the screen.AnimationWith all that said, Excel Saga's animation is fairly well sophisticated for its time, but nothing spectacular. However, Excel Saga is entirely self-conscious of its flaws and doesn't give mocking itself a second thought. For instance, there's an episode where all the male characters are given no screentime and the females are given a "30% increase to shading and highlights."  It uses its low-budget animation quality to its advantage, which is a definite plus. By far the least commentable (is that a word...? Is now!) of the categories; not too much else to say here.SoundMoving on, the sound score is much more commentable. The opening theme fits the series like a glove, and probably even better considering it's sung by the seiyuu who voice Excel and Hyatt. On the other side is an ingenious ending theme, sung in dog barks regarding the manner in which Menchi would choose to be eaten should the time come. Sandwich a great OST inbetween and there's not much to complain about. Each of the tracks capture the moods of their respective scenes with finesse, and despite their obvious lack of great production quality I quite enjoyed them. Even better, though, top it all off with an outstanding Seiyuu and you're good to go. The voice actor for Excel is especially impressive, as capturing that energy and hype is certainly no easy task. I also loved Pedro and his Spanish-accented Japanese.CharactersIf you've seen Azumanga Daioh, you probably have a good idea as to how Excel Saga executes most of its character designs.  Every character has at least one trait that's exaggerated in the extreme, whether it be Excel's non-stop ranting or Shioji's knack for having little girls appear and assist him in every possible circumstance.  Despite having a massive caste of characters, I found each individual to have a distinct and memorable flavor.What really stands out in this category, however, are the interactions between the characters.  Where they personally lack depth, their relationships are weaved with amusing complexity -- the quartet from the civil service agency are perfect examples.  The constant sparring between Iwata and Onigunse is particularly notable, as the two are constantly at odds over everything save women; quite ironic considering the two spend the entire series chasing their respective love interests.OverallAll in all, Excel Saga boasts some hilarious random humor that parallels its parody well.  As I mentioned before, however, it polarizes itself in such a fashion that it becomes an anime you will either adore or despise.  The content is much less an issue than the presentation; being able to tolerate Excel is probably the sole defining factor as to whether or not you'll enjoy the series.  If you can, this will probably become a classic in your anime collection; if you can't, it will probably become a classic on your black list. 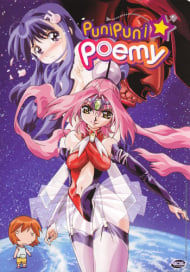 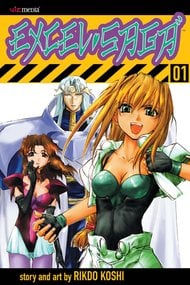