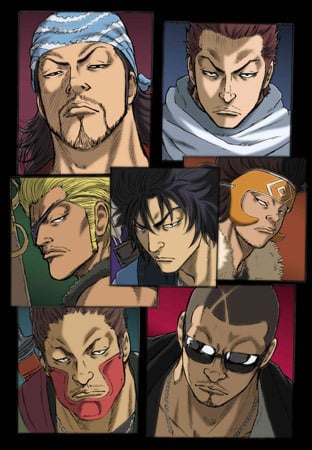 For the citizens of Kuruda, fighting is everything. From ordinary citizens to the all-powerful fighters known as Sevaars, each day revolves around winning each battle and being the best, all for pride and honor. Gau Ban (commonly known as Black Howling) and Elle Ragu are two of these fighters, looking to gain their strength and master the legendary Shadow Skill, even if it means having to fight each other in the process...

Goku and Krilin have completed their training under Master Roshi and are now on their way to participate in the World Tournament, which is sponsored by the young emperor Chaotzu. Meanwhile, the Crane Hermit and his younger brother Tao Pai Pai are using the young emperor to gather the Dragon Balls, which they plan on ultimately using against him; Bulma, Yamucha and the others have also started looking for the Dragon Balls. At the start of the Tournament all parties will come together, and their mystical adventure shall begin!

The land of Chungwon is in a state of chaos – the government is all but powerless to stop the many rival gangs that each want to carve a kingdom for themselves, the Camillia Blossoms being the most powerful of them. Having seen what terror his fellows are unleashing, Danyoung, a highly skilled martial artist of The Five Dragons, sets out to fight for the people of Chungwon.

Fist of the Blue Sky Specials

Shinokita Reiko and Yajima Junko are second-year high school students who travel from school to school fighting bad guys, ninjas, yakuza and corruption. At this high school they encounter a secret ninja order and a corrupt administrator, as well as a tragic death in the distant past. With the help of Kotetsu, a skilled ninja, they set the school to rights, but not before leaving several broken hearts behind.

Storm Rider: Clash of the Evils

When some of the greatest swordsmen in the world are brutally murdered, Wind, Cloud, and the massacre's only survivor, Ngou, battle for a blood that holds powerful gifts.