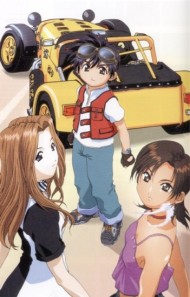 When I saw that this series was written by Kosuke Fujishima, author of the "Oh My Goddess!" and "You're Under Arrest", being a fan of "You're Under Arrest" and hearing good things about "Oh My Goddess!", I became interested in checking it out. After seeing that it wasn't as popular as his other works, I went into eX-Driver with moderately set expectations that I would get at least some entertainmet out of the six episodes. And after watching it, I can easily see why this wasn't as popular or well remembered as his other works.   Set at some point in the 22nd century, people no longer drive cars themselves, instead relying on an artifical intelligence to drive for them. But when the AI systems in these cars started malfunctioning, causing the cars to lose control, a team called eX-Drivers (or eX-D for short) are formed, driven by actual drivers, chase down the cars that have gone crazy. I don't know why the group of people who actually drive cars are the ones called eX-Drivers, but whatever.   The series follows three such eX-Drivers, Lorna, Lisa, and new addition to the group, Soichi. Soichi is the youngest of the group at 12 years old, and the other two are in their teens. I imagine that making them younger was to appeal to a younger audience, and I don't really mind having three kids as the main characters, but it just raises questions to me, like how does a 12 year get a license, especially for such a dangerous job. But I'm guessing this is going off of Pokemon rules, and that's how the series universe works, and the characters never actually get into any serious danger.   EX-Driver does bring up some neat concepts to explore, such as an underground mentioned in the first episode where characters have a boost button in their car and have modified the cars programming, and later in the series, there are characters with gasoline cars that can't be tracked by the same system as the AI cars and are off the grid. It would have been neat if the series explored this stuff, but unfortunately due to it being only 6 episodes, it never really gets to do that.   And that's not taking into account other stuff that it could have brought up. Is there no one would doesn't trust the automated systems of the cars, and even cites statistics of AI failures, or at least talks about all of the news stories of failing AI as a reason to not have an AI car? Or even just dislikes the idea in general, based purely on personal preference. What about people who simply can't afford the AI cars, or simply don't care about what car they drive, and just want a way of getting to where they're going? And I'm pretty sure there are car enthusiasts out there who would want to drive, tune, and build their own cars, or just want to buy and deal with classic cars.   There could have even been an episode where the characters didn't have access to cars, like being stranded somewhere where they didn't have access to the system, or being forced to take a break since the job is clearly stressing them out, and it ends up being a bonding experience. There was enough here for it to expand out to a 12-episode series at least, but unfortunately we got stuck with what we have.   All of these could have been good ideas for episodes, and could have easily broken up the monotany of the series.   Which is unfortunate, because the series clearly shows off Kosuke Fujishima's love of cars, and by extension, motorcycles, and it seems like such a wast to not let him use his love of said vehicles and let him stretch his creativity a bit. If this couldn't have been continued as an anime, it would have been nice to see kosukecontinue it as a manga at least.   The only interesting thing about this series is just how predictive of self-driving cars it was. But since it never goes that in-depth with the concept either, so there's no real reason to watch the series based on that alone.   While eX-Driver is nowhere near the worst thing that I've watched, I doubt that anyone is clamoring for a re-release, but I'm pretty sure that Discotek might pick it up at some point. Unless this get some sort of new series that actually expands on the concepts of the series, I can't really recommend it. 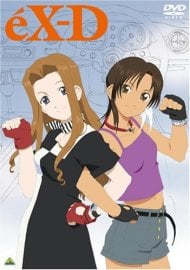 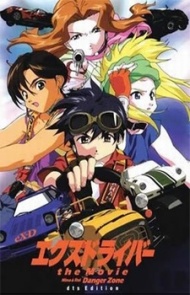