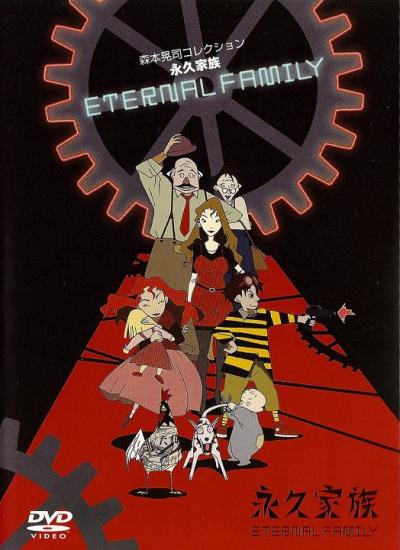 In a world where reality series are in high demand, an experiment was concocted: take regular folks who have dropped through the cracks in society, brainwash them to believe they are a real family, and see how they function as a family unit. The regular populace was so interested in the idea that this family was put in their own reality series, of course! Living in a closed environment and unaware of the outside world, this dysfunctional bunch do everything they can to remain sane... that is, until they accidentally escape!

StoryEternal Family is a Studio 4C production. Interestingly enough, as we were watching this both of us kept saying how much it reminded us of End of the World (another short from Studio 4C), and sure enough, when the end credits rolled, it was in fact Studio 4C! This might explain the confusing nature of the OVA, as well as the pacing and randomness that abounded. The story involves a family that is made up of rejects of society. These individuals have been brainwashed to think they are actually a family (except the dad), and live in a closed environment. Due to some circumstances, this experiment of sorts is being broadcast on TV as a popular reality show -- and thus the story begins. The first half is filled with extremely short, spastic and random clips of the family doing various things. Often it doesn't make sense, often (well, always) you think "wtf?!" freshly after each clip. Each clip is followed by a closeup of a toilet flushing, for whatever reason. In the second half, they escape, and it follows the various characters around the city and their brief misadventures. Really, there isn't much to be said about the story, because it's 100% random. There is a minor underlying plot, but it's second to the animation and spasticness of the world. Eternal Family outshines (on the spastic aspect) even End of the World, FLCL, or perhaps Dead Leaves, strangely enough. In my opinion, it was a bit *too* spastic, like it was trying too hard. I like strange and unusual things, but Eternal Family felt like it was being force fed down your throat, instead of shoved in your face. Still, it was crazy and unique, so it has to get a 7. AnimationAny fans of Studio 4C will immediately recognize the artwork. The colors used are rich and lush, in a way, and the backgrounds and level of detail are superb. Character designs are definitely trademark Studio 4C as well, though it's hard to describe what it looks like. The detail is definitely the most well done in Eternal Family, and the camera angles of certain scenes help fit the spastic mood. However, like the story, there were aspects of the animation that felt TOO spastic and overdone. For example, there was one seizure-worthy lengthy scene of a TV screen, showing a woman doing aerobics in front of alternating flashing hot pink lines. I have no idea why the scene was as extended as it was, nor why it was in there at all. It seemed like a way of saying "hey, let's just throw in anything flashy and spastic since that's the point!" Transitions were extremely fast (with the toilet most of the time) and scene changes in general seemed very rushed and fast. Again, this fit with the desired pacing, so I guess that means it succeeded. For overall Studio 4C quality, wonderful colors and crazy characters, this section deserves an 8. SoundThe music tended to be extremely fast or hard synths, reminding me quite a bit of happy hardcore (or regular hardcore, for that matter). Like everything else in the OVA, the point was to make it as spastic and crazy as possible, and it succeeded in stirring up your brain that much more. However, yet again, like the animation and story sections, I felt at times it was taken a bit too far. Especially the transitions between super pounding beats and pure silence. Voice acting seemed to be OK. CharactersBy far, my favorite part of Eternal Family was the characters. Each of the family members (except the dad, really) had a very set and unique role that ended up being quite hilarious. The mom was very moany and always needed to use the bathroom (I'm still not sure why). The older sister was constantly pining over a man whose picture was in her locket, the younger sister talked only through a doll and in one scene, was terrified to cut a vegetable in fear of hurting it. The brother was a mad scientist type. The dog was my favorite. He, for some reason, would blow up like a balloon and then everyone would be afraid of him! Also, there was a courier chicken of sorts that could talk, a baby that liked to cut things, the producers of the show who dressed up in animal costumes, and the regular townsfolk who dressed strangely and were decorated by odd things such as solid color lines through their faces. While there was little to no character development, at least we got to see some hilarious characters playing out their roles perfectly. OverallI love Studio 4C, and tend to rate all their works fairly highly. Eternal Family was definitely good, and something you'd enjoy if you like bizarre and weird things, but I still felt it was a bit overdone, hence the 7.5 and not an 8 or 8.5. The animation was fantastic, music fit well, the characters hilarious and the overall feel funny and random, and that's probably enough reason to watch. And at only 30 minutes, it won't take up much of your time. Studio 4C fans or fans of unique and strange things should definitely check this out.

What I Liked: The great (albeit shamefully dated) techno soundtrack. The fluid and unconventional animation. The premise, despite being executed in a rather disjointed and left-of-field manner. Character designs are good and the characters themselves are zany and all have their own little quirks. The quick pacing. Has a surprising amount of detail and depth for a 28 minute short.What I Didn't: Repetitive transitions in the first half are disorienting and may deter some viewers. Takes half the run-time to fully get started. The outside world feels unimaginative and flat. Messages and concepts presented aren't anything new - especially in reality television-gripped 1997.Final Verdict: Fast, frantic and frustratingly disjointed, Eternal Family is a strange beast that started out its life as a smattering of 30-second shorts - which explains its breakneck pacing and seemingly erratic plotline. Despite this, the characters are quirky and all-and-all, this is a odd but good little relic from the cyberpunk-crazy late-90's.

Hey look! It’s a dark and stoned Truman Show! … No, it’s not. This series was born as an unorthodox series of 53 little episodes of about 30 secs each and only later made into a whole for commercial purpose. ART The general feeling of the world in terms of genre categorization is a dystopian cyberpunk version of our modern world. Everything is dark colored, with rough edges and a feeling of ugliness and decay. You see crude and dirty skyscrapers, mingled in cables and other contraptions, all over the place.The character figures are drawn in a way that is not reminiscent of mainstream anime. If it weren’t for the Japanese voices, you would easily mistake it for an experimental/alternative, low budgeted European production. It gets some points for originality but it loses them again for not being of exceptional budget.It has very good motion fluidity, as characters and objects move in a very rubbery and fast (but not realistic) way. There are various characters that dress in weird cloths and do pretty bizarre things, making the world a very unique but also disturbing place. SOUND Music themes and voice acting were very few and low-toned but they aided in the grim atmosphere perfectly. The plot is moving mostly through sounds and motions rather than words, which makes it very easy to be understood by any viewer. STORY The plot is about a family suddenly discovering that is being monitored as part of a reality game, causing the producers of the show and the fans to run amok. At first, I thought it was just the anime version of the Truman Show. But then, I discovered that it is far more mature than that lukewarm movie. The main theme is the way modern world dehumanizes people and turns them into passive and materialistic zombies. It is a very good idea but the movie lasts too little and it is straightforward. Building more on the idea would make a blast out of it. Nevertheless, I liked it a lot for what it is. There are similarities in the way amoral people exploit the daily lives of others in order to make a buck. A good message; no matter the media presenting it. The producers of the show are a bunch of greedy money-hoarders who try to cover-up their mistakes with silly filler shows and solve all their problems with money.The fans of the show on the Outside World are a bunch of amoral idiots, who don’t really care about the well being of the reality family. They just want a show to look at and get famous by being close to other famous people. The producers offer a bounty for the capture of the family, and they brainlessly rush to get them without a second thought. It tells a lot about how people dehumanize before materialism and ephemeral fame.The family members themselves are quite buffed with everything that is going on. They realize that their lives were just a show but they are too scared and confused to do something about it. Everyone is trying to capture them and they never have a moment of peace after they discover the truth. In the end, they are captured and partially willingly get brainwashed to forget everything and return back to the show, like nothing happened. It tells a lot about how people are willing to stay in the dark, instead of risking and trying to solve the conspiracy that controls their lives. CHARACTERS No prevailing characters or even character development exists in here. The reality family has very distinctive quirks and personalities but that does not make its members interesting or memorable. They could have matured if they had tried to change their destiny and they could feel more fleshed out if they were given more screen time but as it is there is very little to know about them and they were either captured or gave up and returned to their initial behaviors. The secondary cast, the producers and the fans, are just generic archetypes and not individual personalities. The entire cast deserves some credit for the realistic way they move and grim but that is all. OVERALL Very distinctive and thus memorable. Easy to watch on one go and gives nice food for thought but its duration is too short to fully develop its themes properly. And now for some excused scorings. ART SECTION: 8/10 Analysis: General Artwork 1/2, Character Figures 2/2, Backgrounds 2/2, Animation 2/2, Visual Effects 1/2 SOUND SECTION: 7/10 Analysis: Voice Acting 2/3, Music Themes 2/4, Sound Effects 3/3 STORY SECTION: 9/10 Analysis: Premise 2/2, Pacing 2/2, Complexity 1/2, Plausibility 2/2, Conclusion 2/2 CHARACTER SECTION: 4/10 Analysis: Presence 1/2, Personality 2/2, Backdrop 0/2, Development 0/2, Catharsis 1/2 VALUE SECTION: 4/10 Analysis: Historical Value 0/3, Rewatchability 0/3, Memorability 4/4 ENJOYMENT SECTION: 7/10 Analysis: Art 1/1, Sound 2/2, Story 2/3, Characters 2/4 VERDICT: 6.5/10