In a futuristic world almost barren of life, mankind is confined to mechanized domed cities where A.I.’s control all aspects of life. In this world, humans are no longer born, they are manufactured in a production line; and alongside them live androids known as autoreivs. Within one of these domed sanctuaries named Romdeau lives Re-l Mayer, one of a few citizens who aren’t entirely prevented from thinking. Her grandfather's prominent position and the affection of the scientist Daedalus have left her more free will than is normally allowed, but Re-l has started to question the sanctity of the city and the citizens' perfect way of life. With mysterious beings known as proxies causing havoc and a man named Vincent causing great influence on her life, Re-l must travel outside of the city to find the answers she seeks and discover the mystery behind "the awakening".

StoryAhh, Ergo Proxy. You stole my heart like a thief in the night and promised such visions of grandeur that I could hardly wait to see what came next. Why, oh why, must you have disappointed me so? There are so many things wrong with Ergo Proxy that it's hard to begin. First, the parallels between it and Ghost in the Shell: Innocence are eerily uncanny; both have an empty and vacuous excuse of a story, combined with stunning visuals to distract you from the blatant stench. The problem is that while GITS2 was terrible from the get-go, Ergo Proxy begins with a drool-inducing bang that ends up being nothing but incredibly false advertising. It's boring, it's slow, and like the chalked-up goth teenager who won't shut up about his pain and suffering, Ergo Proxy tries desperately to sound intelligent and mature but rather comes off as pretentious, obnoxious, and is the root of much eye rolling. For clarification, consider the following: Ergo Proxy's first episode is gorgeous, badass, and promising beyond belief. Reminiscent of a hybrid between Hellsing, Ghost in the Shell and Witch Hunter Robin, one can't help but be drawn into its world, fiending for more. However, then the rest of the "story" kicks in, complete with both a lack of movement, and a lack of enough caffeine pills in existence to keep any sane person awake and functional. There are way WAY too many episodes dedicated to a single character performing an inner dialogue with himself over and over and over, discussing the fact that he doesn't know who he is. Imagine Evangelion episodes 25 and 26, but only a single person, and then repeat it throughout at least 6 episodes of the series. OK guys, we saw it once - why must we see it a billion more times? Gee, what else? The creators tried so very hard to make the dialogue sound "intelligent" that it fails miserably. Also, any semblance of "plot", with the exception of the last few episodes of the series, is revealed only during one-off episodes which have nothing to do with the story (such as a random game show episode). But wait, don't get excited! The cluster fuck of an ending does nothing except raise even more questions, and ultimately does nothing for you. So, in summary, the story is a complete let down on basically every level, period. Do yourself a favor: don't assume that just because you saw and liked episode 1, that you either know what the series is about or will like it for sure.  AnimationWhat Ergo Proxy is lacking in story, it makes up with the gorgeous visual imagery. Fans of cyberpunk will appreciate the detailed computer consoles, dark appearance and attention to detail. In the cyberpunk and gothic regard, Ergo Proxy is PERFECT. Everything is sleek, sexy, and stunning. That being said, I have some major problems with the character designs. First of all, Re-l is too much of a Michael Jackson impersonator for my tastes - meaning, her facial design changes so much from episode to episode that it's mind boggling. In some episodes, she looks gorgeous. In other episodes, her facial features appear to have been scribbled on by a three-year-old child. It also doesn't help that the majority of the secondary male characters look exactly the same, as that makes the "story" all the more confusing. The Proxies' designs are great, though... as are the backgrounds. More detail definitely could have gone into the character designs and outside-the-city backgrounds and environments, however.SoundIndustrial music is my roots; thus, Ergo Proxy's unusual industrial and dark electronica soundtrack suits my tastes perfectly. If you've listened to any older Delerium albums, that's the kind of music you can expect. I lowered the score by a point because of the travesty that is the OSTs: there are two and they are long and amazing; so why is it that only three to four songs total are repeated over and over throughout the entire series? Where are the rest of the songs? Not only does this not showcase the music director's genius, but it also makes the few songs you hear repetitive and semi-annoying after awhile. MONORAL's "Kiri" as the opening is amazing and enthralling. Not since Stellvia of the Universe have I chosen to listen to an intro song each time an episode starts.CharactersLike the story, Ergo Proxy tries really, really hard to be deep and meaningful with the character development, and fails. There are a few relationships being explored: Vincent and his relationship with his inner psyche and memories, Vincent and Re-l, and the education of the young and infected autoreiv known as Pino. As previously mentioned, Vincent's incessant inner dialogues are tedious and tiring. Re-l and Vincent's relationship seems forced and awkward, and Pino, though the only form of comic relief to be found, still manages to be obnoxious with her endless third-person speak. Ultimately, the trainwreck that is Ergo Proxy's "intelligent" plot managed to destroy any possibility of good or believable character development - especially with the rushed and forced ending.OverallErgo Proxy is easily one of the greatest let-downs I've had, out of the 600 or so anime I've seen up to the point. Had the first episode been structured like the rest of the series, I wouldn't have given it the time of day. A poor story, weak character development and inconsistent animation make Ergo Proxy an almost worthless viewing in every way. The soundtrack is amazing and the cyberpunk elements are fantastic, but there just isn't enough to warrant a good recommendation. Though people either seem to love or hate Ergo Proxy, I'm convinced that people who can see through fluffy pseudo-intellectual babble would agree with the latter folks. Unless you are completely set on watching this anime, stay away.

StoryErgo Proxy’s storyline is a disaster. A hopeless, irredeemable disaster. No one will deny the incredible ambition of this series. The production values, for one, are on par with the best that modern anime studios have to offer. The storyline is epic, sweeping, and complex. Moreover, multitudes of challenging and varied themes are woven into the science-fiction narrative. At arm’s length, Ergo Proxy looks, feels and smells like it could be a defining classic of this decade. Instead, Ergo Proxy is a tragic disappointment, an almost comically inept failure. The show will bore and confuse the watchers who are unwilling to turn their Saturday afternoon into an English Lit. assignment, and insult the few who are. For all its high and lofty intentions, watching Ergo Proxy is, in the series’ own pompous rhetoric, a zero-sum game. The identity of self. The nature of reality. Society’s addiction to technology. Life as a zero-sum game. The afterlife. Artificial intelligence. The existence of a soul. The existence of God. The raison d'êtres of individuals and societies. The unreliability of the senses. The bestial nature of humanity. Society’s Fear of the Other. The callousness of evolution. The inhumanity of intellectualism. Human fallibility. Genetic engineering. Machiavellianism. Existential ANGST! Most brainy sci-fi shows have the good sense to pick one or two of the above themes and then explore them in detail. Ergo Proxy, on the other hand, touches on every single one without ever seriously delving into any of them. The result is clumsy, unorganized and shallow. In the end, the show plays more like a greatest hits compilation of better sci-fi titles before it than a legitimately standalone work of art. Those trying to cast the show in a good light might call Ergo Proxy “eclectic” – personally, I prefer “bloated.” Also, like Ghost in the Shell 2: Innocence, Ergo Proxy feels the inexplicable need to bludgeon its viewers with countless literary references – references that are often largely irrelevant to the actual storyline and add little to the overarching narrative. The resulting allusion profusion makes the show seem more like a classroom assignment than a work of entertainment. Perhaps because of the endless plethora of themes and allusions, Ergo Proxy’s pacing is turgid and inept. Only a handful of plot details are revealed in a given episode, and even those are slowly squeezed out, like turds through a tightly puckered sphincter. The rest of an episode’s time is taken up in leaden dialogue (or even worse, monologue) that goes absolutely nowhere.AnimationThe visuals are competent, if not spectacular. The series adheres to its dark, nearly monochromatic palette almost religiously, deviating only in rare and effective moments. This gothic style, more than anything else, is probably the animation’s biggest strength. Unfortunately, other parts are decidedly lacking. The character designs definitely leave something to be desired; in particular, Real Mayer’s eye-shadowed face is ugly and unappealing. Also, the action scenes are often underwhelming and unimpressive, albeit never actively bad.SoundFrankly, Ergo Proxy has a much better soundtrack than it deserves. Both the OP and ED are fantastic rock tracks, and the background music is wonderfully moody ambient that works extremely well with the show. Voice acting is fairly monotone due to the nature of the show, but is fine regardless.CharactersLike other experimental science fiction shows, Ergo Proxy just has too much weighty storyline to really spend time on creating interesting, fully fleshed out characters. However, unlike other shows, the plot isn’t good enough to make up for the shallow, one-dimensional characterization. Rather, the weakness of the storyline only serves to bring out how terribly uninteresting each character actually is. Real Mayer is one of the most vapid, underdeveloped protagonists that I’ve seen in recent memory, and the rest are only marginally better.OverallGranted, several isolated episodes are creative and interesting, and there are few series out there as ambitious as this one. As a whole, however, one gets the impression that rather than the creators setting out to make an anime that meant something, they were content to make the series just look as intelligent as possible. When all is said and done, Ergo Proxy doesn't know what to say, so it ends up saying little at all. 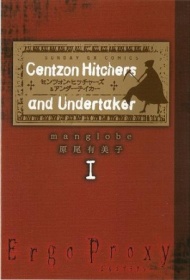