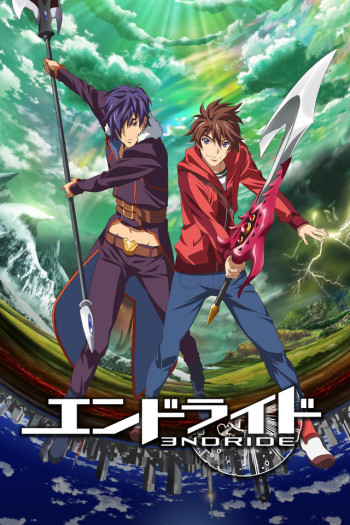 So as probably the only person who watched the entire anime and reviewed it, I can only say this: never read a review about an anime before it's even finished. Animes are start to finish; you don't get to leave a negative review and you don't even know the whole story. That being said: let's review.

Most of the reviews are pretty spot on about the intro aspects (I think because they only made it like 5 episodes in). But let's be clear, other than the unimpressive musical score and the annoyance of the main characters, the only real issue is how long it takes until you actually want to WATCH the anime.

The overall story is actually not terrible. There's a plot, there are several twists, and overall there is even character development. The biggest issue with this anime is really how annoying the relationship is between Shun and Emilio, and how drastically slow it takes for this anime to become enjoyable. Literally after the first 6 episodes it picks up, has entertainment, focuses less on the relationship between Shun and Emilio, and actually starts to illustrate the world Shun has entered and brings to light many of the issues that are being discussed by the rebels. While this may not be a stellar story overall, the plot is good and if you watch from start to finish you won't have any regrets.

The animation doesn't really need much discussion. It' 2017. The drawings and the fight scenes are about what you'd expect from an anime in this day and age. I don't think the animation is lazy, but the action scenes are a bit dull at times. To be clear, if you want an example of what a 10 is on my scale, it would be a better drawn fight between Rock Lee and Gaara in Naruto. So a 6.5 isn't too terrible, I just have high expectations.

The side characters aren't all great, but the later ones do give you hope and even become a few favorites. The downside is that there really isn't much focus on some of the more favorable characters, just the main characters. But it is fun to see how the plot twists bring out the true personalities of the people Shun interacts with as he goes through his journey.

All in all, I don't regret watching this anime. I feel that the later end of the series definitely more than accomodates for the poor start, but it's because of that early start that I rank this at a 5/10. You have to force yourself through the initial part of the series that's supposed to grab your attention, and then it finally reels you in. It's worth watching once, but I wouldn't watch it again.

What on earth is up with this. It's kind of risky starting out with a character obsessed with some rocks like that and flipping back and forth from a normal world to a fantasy world. Those were my first thoughts. I got half way through the first episdode and decided it wasn't worth my time. The beginning is a risky one and a bad one at that. Granted the anime is only two episodes in but I couldn't even find a reason to bother with the second episode. The animation is the only decent part. Even the soundtrack is weird. I'm thinking you have to have some rather particular tastes to like this one and I just don't fit in that small group.

When I saw this anime in the list of the spring season, not gonna lie, I was pretty excited. The promo picture looked interesting and promising and I had my hopes up.

However, when the first episode came out, I have to say, I was pretty dissapointed. The beginning of the episode was pretty interesting, but that's all that I can say.

Firstly, the "warp relics", even though though may be original in anime, were already used in a pretty famous manhwa "Noblesse", except they were called soul weapons.

Secondly, the soundtrack made me cringe. It reminds me of oldschool Disney movies, even the music from Heroes of Might and Magic 3, which made me giggle everytime I heard it.

All in all, even though my opinion on this anime is pretty low, I do hope that it will get better once the story continues.

It was just really bad... there is nothing to it.The characters are boring and dull there is no plot development.They are just wasting time doing nothing.Most of the events are just very poorly connected.The world of adventure they tried to create is just not intresting at all and even though the idea could have been developed and have some potential they just wasted it.

We have a prince who is angry and pouty all the time because the king may have killed his dad(I think his name is Emilio)and shu whose only special thing is rocks and a weapon thingy he wasn't supposed to have because he is an outsider or something.So generally random things are just happening.

To sum up just don't bother wasting your time on this.Go find something good to watch.

I was acctually exited when I saw Shun go to another world... but I thought he was going to travel between these two worlds >.< (like Kyou Kara Maou or something)

and the plot of the anime :/ just disappointed...