End of the World 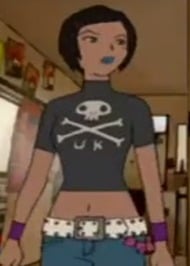 When otherworldy Kazumi met normal Yuko at a rockin' punk show, great things were destined to happen. And great things, of course, implies riding a cybernetic creature from the TV named Face to another world full of scantily clad heavyweight men, encountering murderous and sex starved jello-like demons, and even gaining the ability to morph body parts into weapons! Just a normal day in the life of two friends... right?

StorySound completely strange? You can't even imagine. End of the World is a Studio 4C production, and is about 10 minutes long. Think of it like a lighter version of Cat Soup, with brighter colors, making just as little sense. Wackiness and randomness abound, there really isn't much more to say besides that. The short film alternates between the real world, and this strange fantasy/demon land. By the end, you do understand the general gist of what happened, but definitely not how it got to that point, or why. Some might argue that it seemed like it ended openly, but I disagree! It ended, you just have to pay attention and get what happened. ;) Hey, maybe I just like weird things like this. But even though the plot didn't make hardly any sense, I loved it. Unique, original, fun, and disturbing all at the same time. Thumbs up from me! AnimationThis might be another biased rating, because I really like stuff from Studio 4C, a lot. If you've seen anything from Studio 4C (Comedy, Mahou Shoujotai, etc) you'd recognize the animation style easily. Thick black lines to outline characters, almost no shading for any characters themselves (including on the face), giving them a somewhat 2D look. Alternate this against beautiful detailed backgrounds at times, and flat 2D ones at other times. Also throw in some cleverly used CG for things like the bedroom, and it's a good mix of things. Also, in the other world, there is a grainy texture over the screen which makes it look like you are watching something on a fuzzy TV. This was an interesting effect, I haven't seen it used before. The monsters and weird characters/visuals in the other world were definitely the best... a combination of disturbing, aeon-flux style things, splashes of pink blood, colorful demons, strange weapon-from-body transformations, and general craziness. It's like watching something like FLCL... it always changes and always is random even in the visual aspects. I love that kind of animation style, and I love Studio 4C's unique drawing style as well. Bingo! High score. SoundIf I had to give a low(er) score, it would be this category, simply because there is almost no music the entire time. In the beginning and end we hear angsty punk rock, which is very well done. The rest of the time we are left with eerie sound effects and moody noises, which are very effective, but not interesting enough to warrant a high score. One of the things I liked the most about Cat Soup (another great weird viewing) was the demented music track they had playing in the background. It was simple, yet very creepy, and this could have used something like that. Taking out ALL music except sound effects in the other world, might have been a mistake. Even so, the sound effects were still pulled off well enough, and the punk music was good enough to warrant a 7. Voice actors for the two girls were chosen well, definitely pulling off the angsty teenage punk chick persona. Creepy voices of the monsters and such were definitely effective as well! CharactersI must say, it's really, really difficult to rate a character section based on a 10 minute movie. In this case, my rating is based on the fact that there are a lot of characters (the two main leading ladies, plus all the monsters, the super creepy guy in the bondage outfit, the cybernetic Face), and each one is so random and weird that it makes you laugh. Not any character development, really, since the length is so short, and it's not meant to be an in depth epic saga anyways. You don't care about any of the characters, but you also like them at the same time because they are just so... random. OverallI don't care what the other scores on other sites have said, I really enjoyed watching this. Is it because I'm a Studio 4C fangirl? Maybe, but I think it's more that I really like weird things like this which make no sense, and are totally random. Combine it with very unique animation and a very strange cast of characters, and how could you not enjoy this 10 minute watch? If you like Studio 4C, if you like oddities, if you just need something to pass the time while intoxicated, check this one out. If you fit any of the above categories, you won't be disappointed! And if you are, so what? You only wasted 10 minutes of your life.

I really enjoyed this short-movie by Studio 4C, one of my favorite studio's if it comes to interesting artstyles and stories. The visuals are quite bad, but atleast they're all drawn, and it actually adds to the whole experience (in contrary to the horrible CG from Professor Dan Petory's Blues, from the same compilation-project). I liked the fact that while it was largely a big heap of randomness, it still had some plot going on. The viewer gets thrown from a "relatively normal" world into a completely bizarre one, but not without any explaination whatsoever. For as good as short-movies can get, this one is certainly worth the watch.