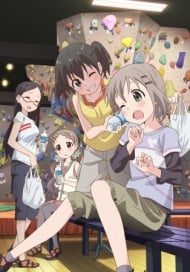 Unaired episode included in the BD/DVD volume release of Encouragement of Climb.

The 2013 Encouragement of Climb OVA plays out like it is the thirteenth episode of the initial season.  Trouble is that the storyline is quite different for two reasons ... two important reasons which will decide the depth of development for the second season. The story is told under the scope of the four minute timeframe the first season tailors all the episodes of Yama no Susume.  Therefore, the plot is predictable, even though it places the premise of E of C in a totally different trajectory.  The four girls, Aoi, Hinata, Kaede, and Kokona are at the wall-climbing establishment in their neighborhood.  The lay-out encourages the vertical climb, something that doesn't match the leisurely nature hikes up the smaller mountains of season one.  The climbing walls are separated into three sections, the simple 5° incline, the harder 85° where gravity has to be overcome as you ascend, as well as the 90° vertical climb.  Of course, the girls’ reactions to being there are predictable.  Aoi’s “I’m here to watch” versus Hinata’s Nike-esque “Just do it!”  And, in time, Aoi takes a shot at the easy wall, reaches the top, and panics that she can’t get back down.  Thank goodness for the super, heavy-duty, extra thick mats that line the floor.  With a gentle plop to terra soft and firma, Aoi is ready to take on another wall.  Get ready for bigger and better things in season two! The second matter affirmed my view of the character of Kaede as eye candy.  She was usually seen in her wardrobe of Fruit of the Looms in episodes of season one.  And her mature figure flatters such scanty garb.  But in this OVA, we have a post-climb adventure in the establishment’s shower room where nude figures of the girls are displayed (I checked the local wall-climbing venture.  No shower area.  Must be part of Japanese mind-set).  However, no worries.  Through the magic of intervening arms and blurring of distance, there was no viewing of the ‘main attractions.’  Which one might anticipate as the personae of the girls develop into the second season.  While Kaede is of mature figure, Aoi and Hinata look too young for high school, and middle school Kokona has the look of one who will be breaking hearts when she enters high school herself. The animation for Yama no Susume remains a study of cute and soft.  Kawai gets a special treatment in watching the girls interact with each other and their environs.  It’s almost a contest of which girl can out-kawai the other, given their personalities.  Soft … that’s the coloration of the animation which seems to be a lighter than usual pastel.  It may seem too faded at times, with moments of brilliant splashes of color, as the out-croppings in the climbing wall or the features of the natural scenery these girls will traverse in their further adventures. So, what’s for season two?  Mt. Fuji?  The Matterhorn?  K2?  Everest?  Hey, let’s not get too crazy here! There’s still season three. 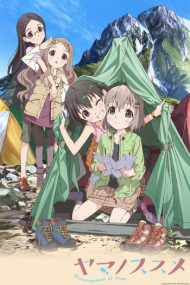 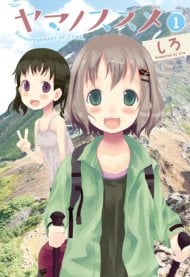 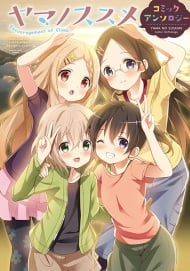