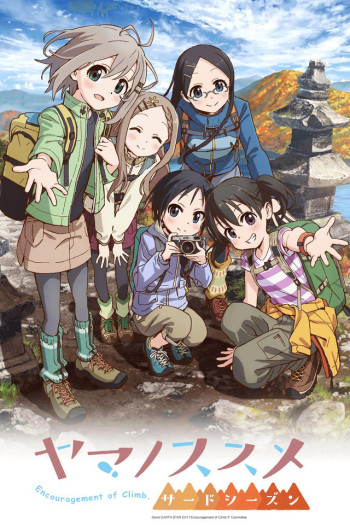 One needs to be careful in making any comparison of third season of Yama no Susume with its second run.  The episodes never go beyond the 15-minute limit, and the third season has a noticeably shorter season, thirteen episodes instead of the twenty-four.  Signs of the franchise losing steam?  I don't think so, but I would propose that the third season irons out the relationship of the two main characters, Aoi Yukimura and Hinata Kuraue.

Yama no Susume has always been about the development of Aoi's character, and this particularly so since the failure to climb Mt. Fuji in season two.  Season three is more about the conditioning needed to build Aoi's stamina.  But more must be done.  Aoi has been introverted since the accident on the monkey bars.  One more hard blow in young Aoi’s life.  Aoi's family transferred her to a new school, ending a friendship with Hinata.  Now, this friendship is restored in high school.  But Hinata has become Aoi's converse, extroverted and able to gain friends effortlessly.  Aoi had been contented with quiet personal hobbies as knitting.  In dealing with Aoi's growth as a person, it is for Aoi to push forward.  Aoi finds her place in the working world, which terrifies her (at first).  Aoi needs to do things without Hinata, which upsets Her (at first).  Aoi has to risk herself in reaching out to make friends with the trio of classmates which Hinata has been running with which intimidates her (all the time).  But this now balances itself with Hinata's concern that she is losing Aoi as a friend.  It is this aspect where we see Hinata in that unfamiliar area of insecurity.

Other characters have joined the Yama no Susume cast, but the other veterans have their place as well.  Kokona remains the petite balance of the team, a middle-schooler wise in her sweetness and gentility.  Kaede is less of that matter of 'eye candy' as a girl maturing in two directions she had been resisting in the first two seasons, being more girly than tomboyish and more studious than laid-back (she is on a scholar's Bataan Death March with her pushy classmate/friend Yuuka who is determined to have Kaede ace her entrance exams).  But Yama no Susume is developing more characters.  Honoka was introduced as the loner-nature photographer whose social graces rival those of Aoi's, and this quiet girl is a fine foil as the two girls work to become more ... gracious.  Hikari is Aoi's co-worker who coaches Aoi as she finds her way in the workforce, as a clerk in a patisserie.  Kasumi, Mio, and Yuri are three classmates with whom Hinata has gotten into friendship mode, and now it is Aoi's challenge to work her way into their circle.

The adventures are pivotal in the coming of a season four (2022).  Aoi's failure to reach the summit of Fuji-Yama has been the low point even with the successful climb of Tanigawa.  She deserves that second shot.  The third season is so much that 'Rocky Balboa charging up the flight of step of Philadelphia City Hall.'  We all want to see Aoi do that cry of victory at the summit of Japan's grandest peak.

The music remains the delightful continuance of the cute theme, and the best of the lot is the closing theme of the latter half of the season Irochigai no Tsubasa, a beautiful duet between the voices of Aoi and Hinata (Yuka Iguchi and Kana Asumi) which demonstrates the perfect blending between these two seiyuu (Asumi is just a louder Iguchi).

The animation still shines in the panorama scenery and the depictions of the climb itself.  Aoi is still training for that second encounter of Fuji, and the fourth season will just resolve the thrill of the accomplishment, and salutes the girl who struggles to get past daily life and the spectacular reaching of goals that Fuji is more than a fitting symbol.