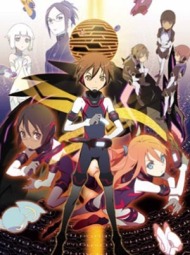 Several decades ago, chemical elements began to disappear from the world, decimating the planet and resulting in the loss of 90% of Earth’s population. However, though the elements have vanished, they aren’t out of reach – they have materialized in Nega Earth, an opposing planet filled with strange monsters that morph into dangerous QEX when they absorb five kinds of positive elements. Normally, Element Hunters - children specially trained to retrieve these elements and battle QEX – travel to Nega Earth alone; but when Homi, Ren and Chiara stumble across a strange old castle, they find themselves chartered with tracking down the elements themselves. With little training, can these children help save the world and stay alive along the way?

Just like most kids, I too found school to be boring. All the stuff in the books didn’t appeal to me and since I was constantly forced to learn them, I ended up hating them even more. Just like any other kid, I was watching cartoons and anime in order to be entertained with magical worlds and alternative realities full of magic and action. It was a simple form of escapism from the harsh reality of forced learning. But there were some shows which were educational and I liked them for that. Amongst my fondest memories I have is the Enquiring Minds series, which was teaching children various things in a very comical way. Another one was a French/Japanese cartoon named Once Upon A Time, Life which was depicting the human body as a complicating microcosmos full of anthropomorphic creatures, as they were making sure for the body to keep being healthy and fending off attacks by germs and viruses. Those were good times.So after all these years Element Hunters (EH) came up to somehow do the same with chemistry. It is basically a typical childrens’ adventure where you get to see how the basic elements in nature, such as oxygen and sodium, interact with one another. In theory it was supposed to be both educational and entertaining but… it wasn’t. Let me analyze it from the perspective of a little kid, since that would be the target audience. Visually speaking, it looks nice with those monsters and the heroes dressed in special suits fighting them with super gismos. BUT… It holds no candle next to other famous kid shows like Pokemon or Digimon because its action is very lukewarm compared to them. In reality, there is more strategy going on in EH and it’s even backed up by real life chemistry. That still doesn’t make it look more exciting; in fact it looks sluggish. The monsters or the heroes are not transforming all the time, nor do they summon huge weapons from some hammerspace. A kid would watch this show with apathy. And I am not saying the visuals are bad. They are quite nice in details and colors. They even have traces of otaku culture, as there are maid androids and female pop idols and the lead girl looks like a cat. But I doubt a teenager or above would sit to watch more than a couple of episodes of this as it is AGAIN quite lukewarm at what he would normally expect. Acoustically speaking, I liked how some child characters are literally voiced by children although the toodlers lack the passion with which they should be talking half the time. It’s not their fault; they lack experience and the anime characters are way too slapstick-extreme when it comes to comedy. That kinda makes the show feel lukewarm again.It has some really interesting dialogues around human relationships and the balance of the world. But then it starts talking about chemistry and GAH it becomes so confusing. I know all the basics around this subject and I was confused as hell with what is going on. Not because I couldn’t understand the elements or the bonds but because they were explaining them in a scientific way, when the show is aimed at kids. Would 8 year olds understand that stuff? Will they even care? Even if they do, how will they remember them? For what purpose? Soundtrack and BGM are ok again, full of “fight for the future” and having lots of mnemonic words for kids to remember the elements. But I will never hum them as I do with Digimon or Pokemon; they again lack passion.The story is fairly simplistic in its plot; it’s mostly monster/element of the week format with some serious stuff happening in between. For starters, there are actually showing people dying in this anime… by the billions. By earthquakes, tsunamis and other natural disasters caused by unnatural elemental deconstruction. I must say it feels quite scary at titmes for little kids to like it. Everybody is sometimes so scared and sad to the point most will drop it. Kids prefer motivational cool characters and not meek crying weaklings. Also, the characters interact with one another in a far more complicating and meaningful way, showing development and immersion to their mentality. That is quite rare for such shows and I have only seen better in Digimon Tamers and Dennou Coil. The cast is in all very well handled but as I said the overall story is weak and lacks excitement.So is this anime enjoyable or memorable? Not really; it is interesting in its concept but feels too complicating because of the chemistry and the talking. Plus, the lukewarm action and voice acting eventually make the cast itself, the most powerful aspect of the show, to feel passable. And as I said, I don’t think kids will learn chemistry out of this. It wasn’t like in Inquiring Minds where they were making comical sketches and you were learning just to understand the jokes. And it wasn’t like in Once Upon A Time, Life where there was an amazingly innovating way to show everything in a completely alien yet familiar way. The action and the characters feel so underwhelming in EH that you simply don’t have a reason to learn the terminology. And trust me when I say that a terminology where water beats fire and is weak against electricity is a lot more fun than using carbon monoxide to split natrium sodium into chloro-oxide germanium… or something like that. SUGGESTION LIST Dennou Coil, Digimon Tamers, Once Upon A Time Life And now for some excused scorings. ART SECTION: 5/10 Analysis: General Artwork 1/2, Character Figures 1/2, Backgrounds 1/2, Animation 2/2, Visual Effects 1/2 SOUND SECTION: 7/10 Analysis: Voice Acting 2/3, Music Themes 3/4, Sound Effects 2/3 STORY SECTION: 6/10 Analysis: Premise 1/2, Pacing 1/2, Complexity 1/2, Plausibility 2/2, Conclusion 1/2 CHARACTER SECTION: 7/10 Analysis: Presence 1/2, Personality 2/2, Backdrop 2/2, Development 1/2, Catharsis 1/2 VALUE SECTION: 2/10 Analysis: Historical Value 0/3, Rewatchability 0/3, Memorability 2/4 ENJOYMENT SECTION: 3/10 Analysis: Art 0/1, Sound 1/2, Story 0/3, Characters 2/4 VERDICT: 5/10

Honestly, I don't understand why this is rated so low. I was in high school when it was coming out and I still enjoyed watching it. Sure, it is a child's show mostly but once all of the characters are established there is a lot more to this show than you would expect from most child's anime. There is a lot of comedy and lightheartedness to this show along with educational content. Later on in the show, though, it brings in more science fiction, the science of which made a lot of sense to me. Overall, I enjoyed watching Elementhunters. If you want something more relaxing to watch, I would highly recommend it.