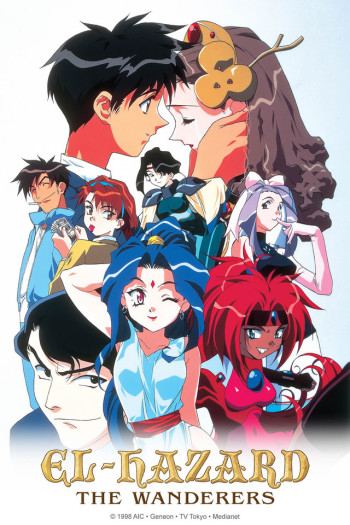 The summary written for this anime pretty much says it all - not much else happens besides some side romance and... action? Here we have nothing extraordinary, only a story that tries to get serious but leans heavily on almost medicore comedy and predictability instead. No epic battles between rivaling kingdoms like I had imagined, just an idiot classmate leading an army of bugs around and retreating half the time, and being beaten by Makoto the other half. The quest Makoto sets out to fulfill, to find a way back home, was the main focus for the first half of this series. He hasn't much luck with that and falls in love with a princess instead. He lacks the genuine concern and panic I think someone would feel when trying to get back home and can't, but there's never any mention of his family so maybe it just doesn't matter to him?

For its time the animation would seem pretty sound, and honestly the style of the series never bothered me. The Bugrum do have a cumbersome look to them, almost like they were designed just to make action figures after them. Other than that... everyone has such tiny mouths oh my gosh.

Definitely got that 90s music goin - it's what really gives this anime it's age but also adds to it's humorous-adventure mood.

All the characters are pretty flat and each has their own purpose to push the plot along, or in circles. Jinnai will make you want to drop this anime just because his laugh is so darn annoying and it never stops... Even Makoto hates him. I hate him. Nobody likes you Jin-

Overall, this anime felt like it would have been better if it had taken a more serious route where you'd actually be concerned when the characters faced the danger and threats presented to them. Instead, you are left with a 26 episode comedy-romance mashup with not much originality. After it all I didn't feel any reason to encourage someone to watch this, unless to show your kids who don't know anything better and need something simple to understand.