ef - a tale of melodies

The story of Yu Himura and Yuko Amamiya’s relationship is troubled and complex. One day, Yuko showed up at Yu's high school and, despite the two not having seen one another for ten years, confessed that Yu was her first love and still loves him. In the present, Mizuki Hayama moves in with her cousin as she prepares to begin high school. She meets his smooth and handsome neighbor, Shuichi Kuze, and begins spending increasing amounts of time with him; they begin to fall for one another despite their age difference. The tale of these relationships thus begins to unfold.

StoryEf ~ A Tale of Melodies so slavishly follows the formula set by its predecessor that it's almost unwatchable. Even with low expectations coming in, it’s a letdown. Like Ef ~ A Tale of Memories before it, Melodies’ plot covers two different sets of tangentially related characters. Unlike Memories, Melodies utterly fails to engage the audience. Instead, the series plods along with trite, uninteresting character development for five spectacularly uneventful episodes before finally dropping the angst hammer. Even when the OMGDRAMA hits, the series mainly feels like a replica of what the first season did better. For example, the Memories uses a massive amount of text during a key emotional scene to blindside the audience, and the result is extremely powerful. However, when the device is used again (TWICE) in the second season, it's both predictable and tiresome. Most of the emotional punch of the original scene comes from surprise and shock value, and without either of these elements most reactions will either and mild amusement at the wall of text. Furthermore, the conclusions of each arc are almost comically inept. Now, I realize that Memories does not have the most originally plotted premise out there, but it at least has the good sense to limit its clichés to the beginning. After that, the plot ventures into unexpected territory, making the story seem new despite the familiar premise. On the other hand, Melodies' clichés continue to the very end, and savvy watchers will find the story horrifyingly easy to predict. The final episode is the worst: a lukewarm and largely plotless mishmash bloated with anticlimactic cameos of characters from season one. What little new plot that's there is tedious.AnimationMelodies’ art direction is largely unchanged from the previous season, but for once this is actually a good thing. The imagery continues to be challenging and memorable, and as a whole complements the story well. Moreover, even when the story is borderline unwatchable, the animation continues to be engaging and creative. Like Memories, the visuals are about taking bold risks. Sadly, the experiments don’t always work this time, as not all of the imagery fits. For one character, masks are used heavily as a symbol, but since his character’s personality has absolutely nothing to do with multiple personalities, the imagery is ineffective. There’s also a general lack of freshness to the visuals, which is no more clear than in the aforementioned “let’s overuse text” scenes copied from the first season. Fortunately, these are minor quibbles. For the most part, the challenging, avant-garde imagery continues to work. Throughout the anime, the pretty animation is often welcome relief from the creatively braindead plot and aggravatingly cookie-cutter characters, to the point where at times it feels like the sole redeeming factor of the show.SoundThe OP and EDs are nowhere near the level of quality that I was hoping for and sound like bad remixes of songs from the previous season: predictable and flaccid. Moreover, Melodies' background music is so similar to Memories that at first I thought it was identical, track for track. The most memorable songs are reused pieces from the original OST, and the "new" songs are  generic and nigh identical to the first season's music. While the original soundtrack was amazing and heartfelt, the new soundtrack's borderline duplication of it reinforces the idea that Melodies is an unnecessary retread of a better show rather than an original work of art. That said, the soundtrack is still fine on its own terms, and is certainly preferable to completely new music of inferior quality. Most likely, if the animation and characters had been up to snuff, the recycled soundtrack would be fine.CharactersWhile some fare better than others, for the most part the characters are aggravatingly shallow and simple-minded. One of the main characters, Mizuki, is the “genki girl” cliché on repeat. Another protagonist, Himura, repeats the same line ad nauseum (“Who knows? I’ve already forgotten”), to the point that he loses all credibility as a real character. On the other hand, some of the other characterization relies on plot devices so artificial and hackneyed that you almost wish the characters had remained one-dimensional. Both Kuze and Yuuko’s development essentially hinges on a single revelation. After their token formulaic “surprise,” each character’s development grinds to a halt, as if the writers thought that merely having a dark secret would suffice. Sadly, this is not the case, and both characters’ unrealized potential remains exactly that. The problem is exacerbated by numerous cameos of characters from the previous season. Not only do these clips break the narrative flow, but they serve to illustrate just how terrible these new characters are in comparison to the old ones.OverallEf ~ A Tale of Melodies is perhaps the biggest disappointment in a year riddled with disappointments. Not only is the series a redundant “companion” piece, but it dampens my high opinion of its predecessor. While the amazing animation still keeps the drama from being an absolute chore, there are too many deficiencies in both the plot and the characters to recommend this to even diehard fans of the first series. 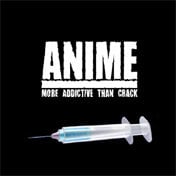 Ef - a tale of melodies     Story 9/10   Desperate in my pursuit of finding a brand-new drama anime with the dignity of my beloved Clannad, I was tempted by many promising series, most of which could be characterised by irksome mediocrity to worrying disturbance – always regarding their creators and what they may have had in mind while producing them. Nonetheless, my at large quest for pure drama and self-forgetting romance paid off and led (with the help of Anime-planet’s search function) to a dreadfully memorable anime by the name of Ef and its two adequate seasons: A tale of memories and a tale of melodies. Melodies – to which I shall comment in this review, should be considered as a direct sequel to Memories, hence the actual continuation of the story. A tale of melodies (a.k.a. The latter tale of “Ef – A fairy tale of the two”, as it is best known to those indulged in the visual game’s saga) depicts the ground story to which Memories was built. The viewer finds out more about the relations formed between the protagonists of the first story along with their affinities in point of one another. The story of the ghostly Yuko is finally revealed while a 10-year-old past hounding Yu and Kuze unfolds the very essence of their tragic figures. The series’ storyline once again fluctuates between the two cities of the previous chapter, however this time it subtends the narration to both the present and the past of the heroes. Once again, the direction is unique in its own kind. Although I was never fond of such artistic delineations, I was completely fascinated by the handling it gave out. Of the few infirm points of the anime should be considered the lack of some innovation in order to differentiate from the previous season. Also, add some drama-clichés that I personally expect in almost every anime. Yet, the average spectator should not consider this a major drawback since the story was given the utmost attention in order to captivate the eye and the mind.     Animation 9.5/10   Why not 10? Who knows… maybe there’s a better 2008 animation I am not aware of. Anyhow, the beauty of the picture is unmatchable and probably one of all-time’s best. Shaft inc. achieved in drawing some magnificent backgrounds and of course a variety of beautiful heroines – a true banquet of colours for the eye. Splendid work has also been done to the area of CG and light effects.     Sound 9/10   Despite the dearth of an enchanting intro song worthy of Memories’ "Euphoric Field", Melodies takes a slightly different turn, mostly now involving classic music without vocals. Calm and intense parts take their respective turns so as to endue the images, and thus create a fairy-tale-like story. The actors are quite the same as the first season, so no big surprises there. Smooth, talented voices surround the characters modestly.     Characters 8/10   Living aside some repetitive deportment that will always come across our path, the diversification of the major characters is more than enough to make things interesting. My personal best is the protagonistic duo of Yu and Yuko, since their acts – especially the girl’s – don’t always correspond with the ideal profile of a nice guy or gal (she makes him fall in love only to break his heart). Abuse, maltreatment, revenge, insanity along with purity, nostalgia, atonement and redemption compose a variety of characters wishing to live by their memories, through their melodies and on to a future unwritten. Any clichés? Hell yeah. But still, the effort put into creating such shivery tragic figures surely deserves praise if not admiration.     Overall 9/10   Ef – A tale of melodies is a story about the will of the heart, the desire to live and to love. A true masterpiece, inferior only to its predecessor and a few other classics, it deserves a rightful place at any drama-lover’s collection. 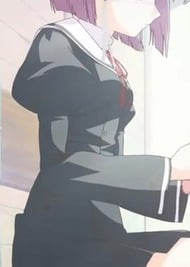 ef - a tale of memories: Prologue

ef: A Tale of Memories. 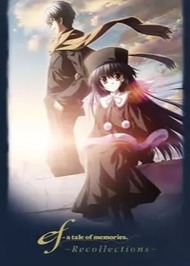 ef - a tale of memories: Recollections 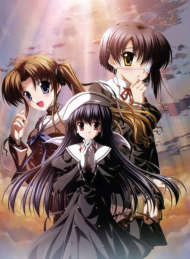 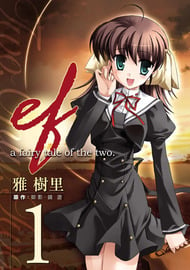