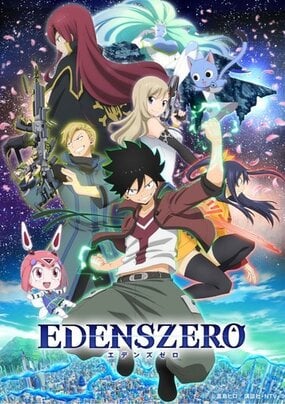 At Granbell Kingdom, an abandoned amusement park, Shiki has lived his entire life among machines. But one day, Rebecca and her cat companion Happy appear at the park's front gates. Little do these newcomers know that this is the first human contact Granbell has had in a hundred years! As Shiki stumbles his way into making new friends, his former neighbors stir at an opportunity for a robo-rebellion…And when his old homeland becomes too dangerous, Shiki must join Rebecca and Happy on their spaceship and escape into the boundless cosmos.

Let me start by seying that the characters look almost exactly as they did in Fairy Tail, even through it was created by the same Person they should've made characters a little bit more original and a total copy of fairy tail characters. Even through I don't like characters I started loving the story since this sci-fi story seams very interesting. The only think I don't like about the story is that Friend obsession but it is really easy to overlook. I really recommend watching it

In a nutshell At Granbell Kingdom, there is an abandoned amusement park. In this park, Shiki has lived his entire life among the machines. However, one day, Rebecca and her cat companion Happy appear and change everything for Shiki, who has never seen people in his entire life. As Shiki tries to make new friends, all of a sudden, his old friends start a rebellion and want to get rid of unwelcomed guests. Running away from the robots, Shiki and his new friend Rebecca escape into the boundless cosmos. Story Basically, what we have in Edens Zero is something very familiar to Fairy Tail: magic that is now called ether, power of friendship, dragons, many of the characters with the same character designs and even voice actors and many many more. In Edens Zero, Mashima decided to stray away from his all too familiar fantasy setting in favor of a space adventure, so you can think of Edens Zero as of a some mix of Fairy Tail and Star Trek. Indeed, we get a somewhat new story, which is good. The problem, however, is that this story follows the formula of Fairy Tail, carrying on its mistakes. In addition to this, while, of course, Fairy Tail is far from being perfect and has a number of flaws, Edens Zero has only 25 episodes. What I am trying to imply is that Fairy Tail had plenty of time for story and characters development, but what can you do in 25 episodes? Wait 5-10 years for 2-3 new seasons? Sorry, but this will work for anything but battle-shounen that are supposed to have plenty of time for story and characters to shine. Do not get me wrong, however. Yes, the story of Edens Zero repeats a number of Fairy Tail’s flaws and it is not good. But the story itself is much more interesting than what was in Fairy Tail. It is not just one planet, where the protagonist was to find his father, it is the whole space, where Shiki is to find the supreme Goddess that no living creature has ever had the honor to meet. No one even knows if she really exists, or not. With that being said, Edens Zero has quite a good story. Art/Sound The amount of recycled material taken from Fairy Tail is bloody ridiculous: Erza Scarlet (now known as Elcy Crimson), Lucy Heartfilia (Rebecca), Wendy Marvell (Lavilla Christi), and Happy (no change) and a number of other examples that can be made. They even reused Kyouka’s character’s design. Sound wise, there is hardly anything worth touching upon, maybe only good voice acting. Characters Nothing really changed from Fairy Tail. Even with these reused character designs, we get the same copy pasta personalities. Take for example that friendship is yet again the central theme of the anime. Shiki is just a copy pasta of Natsu Dragneel, yes, by the way, there is no Natsu in Edens Zero, so 1 bonus point for Edens Zero. Anyways, Shiki is just as stupid as Natsu, wanting to make friends with each and every. But when his friends are hurt, he turns on his berserker mod and kicks many asses. Homura Kougetsu (Wendy is finally boing-boing), but I will not be telling you anything about her and finally the last protagonist is Rebecca (Lucy), whose sole existence in both Fairy Tail and Edens Zero is nothing but a huge mystery for me. Making a character only for fanservice and some forced drama moments. Anyways, there you have it. The characters might look a bit different, but it is still Fairy Tail. Criticism/Random Thoughts 1) 25 episodes=5 more years for a new season? 2) Copy pasta character designs. Yes, there is nothing bad about it. Hiro Mashima is just trying to make Fairy Tail fans like Edens Zero, because, ‘look, I have the characters you like that much, Lucy boobs go boing boing.‘ Creativity level 0, please ask Oda for a few lessons; 3) Copy pasta character personalities; 4) Story can hardly get enough development only in 25 episodes. If there were 100 and more, no questions asks, this would give Edens Zero more than enough time to shine; 5) Weak supporting characters. Overall All in all, there you have it, Edens Zero. Do not get me wrong, it is not bad, it is slightly better than average. The only good thing about Edens Zero is its story and the story too has far too many flaws for it to be something better than good. I do know, a miracle might happen, but for now, honestly, Fairy Tail is much better than Edens Zero; it is simply impossible to make the viewer appreciate the series in only 25 episodes. So will I recommend you this show? No, I will not. Unless you are a hardcore fan of Hiro Mashima, but the choice is yours.

If you like Fairy Tale then you'll like Edens Zero because Edens Zero is Fairy Tale in space. A guild, a quest, (space) dragons, the scifi equivalent of magic and a blue cat like creature named Happy. Not alot of effort on this one but its kind of fun if you are looking for something light with a bit of ecchi. 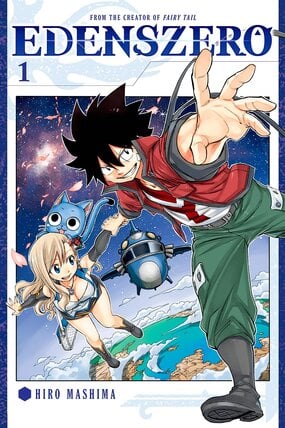