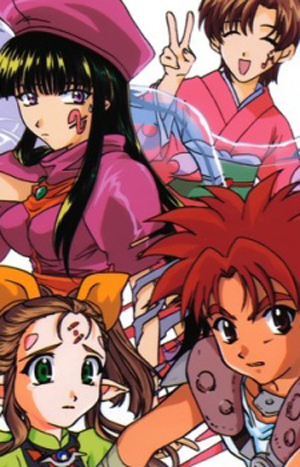 This certainly isnt an anime for everyone. Though I enjoyed watching it.

It does start off a bit slow and it will not hold your hand to explain every thing which is a double edged sword. Though I am glad they didnt spend entire episodes to just sit around for exposition. It has what is expected for most shonen anime:  a kind hearted/clueless protagonist, numbing sadness/ distubing scenes, some silly comedy, eye-rolling romance, and an epic quest that only the hero (and friends) can do to save the day.  The episodes which seem like filler are actually small clues and foreshadowing about the bigger picture and what is to come.

The animation is old (it is an anime from 1999), but it was refreshing to not witness any CGI. The character designs and environments were done well.  I especially liked how the explosions in older anime look... though there were times when explosions seemed to happen inappropriately (but not as bad as if it was directed by Michael Bay). The world building aspect of it was interesting to me, but it felt like some things were shoehorned in (like nekos for example).

The english voice acting was typical of that time but there are a few standout voice actors and good lines to help keep things bearable for me to keep watching. The soundtrack was mostly enjoyable and added to the atmosphere except in a few instances.

Everyone does act within their own motives and self interest.  The characters also have an impact on one another as they interact: for the better and the worse. There is more than one faction and everything isnt as simple as hero = good / villian = bad.

This is my first review and I hope it will help the community. Try a few episodes, if you dont like it by episode 5 or so, then it might not be for you. It might help to know that in the world of eden's bowdy, humanity has nearly destroyed itself several times by this point which accounts for the massive gap between the people of the surface and what the people of the two eden's have.

Note: I watched the Dubb version.