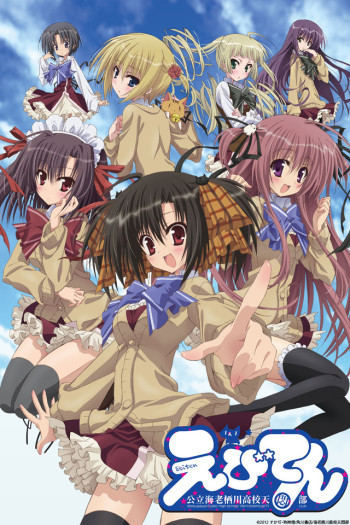 Guess who? Yes, the baron of over-opinionated, RandomRedneck, is here with another review. For this review, a tackle a show that starts as potentially promising parody, and just devolves into...something. This, is Ebiten. Let us begin, shall we?

This is a schoolgirl comedy. Story was never a vital point, and it shows. The first few episodes are basically "Let's parody (X show)" and frankly, it should have stayed that way. As it drags on, there is some convoluted thing about one character having a split personality or something, and they try to cram all the badly done drama into the last episode. Comedy to drama never works, especially for this show.

Not much to say on the animation front. Not bad, not good, just...standard. So...yeah.

Like animation, not much to say about the sound. The show doesn't even have an opening theme, and the ending theme is pretty meh J-Pop stuff. Background music doesn't stand out anymore than the ending theme. I doubt you'll even notice it half the time.

Characters are pretty typical, but nonetheless somewhat entertaining. We have Todoyama, your usual bossy club president, with the added bonus of being pretty much a sexual predator. Said sexual predatoring is aimed at Kanamori, a Fujoshi, and pretty much most entertaining character out of the bunch, on account of being a perv. Rikei, who is your typical stoic, is alright. Little bland, but good. Hasumi(The VP) is...just there. Doesn't really make much of an impact. And lastly, Oomori-Sensei, club adviser...and also a cat. An awesome, apparently perverted cat.

Again, it stared as promising parody, but tried to do too much, and just fell to average levels. If you wanna kill a little time with a typical schoolgirl show, try something else. If you want weirdness and schoolgirls, try this show. That is all. Thank you.

Allright. It's been a while since I've done something like this so bear with me as I try to find my way again.I did quite a lot of them in the past on a different website which you can find here: http://legendsofsatura.net/index.php/forum125/6-reviewing-guild.html

ART: I can say many things about the art but ugly is not it. Sadly it is mostly used for fan service and little else.

CHARACTERS: Not sure who is the main character is in this anime. Usually it would be the one male member of the club, Itsuki, but he really doesn't do that much. I suppose the Astronomy club can be said to be the main character or rather the centre that everyone revolves around.

STORY: .....yeah, I got nothing. Seriously. I watched this anime a few weeks ago and I can't think of anything that stuck to me about this anime. It is really that forgettable and nothing noteworthy happens except the fanservice.