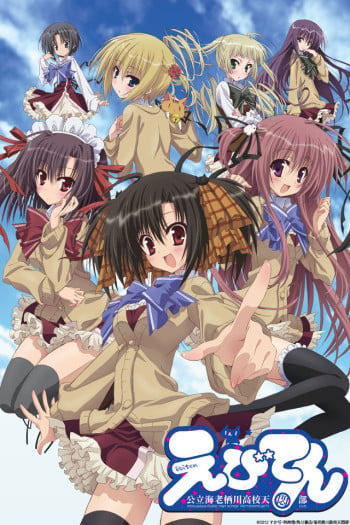 If you're looking for anime similar to Ebiten: Ebisugawa Public High School's Tenmonbu, you might like these titles.

Both follow a club of eccentric people with fan-service moments. While Ebiten is full of blunt fan-service Seitokai takes it far easier and gives the characters deeper personalities. Both have somewhat similar artstyles with large eyes and a hair-heavy heads.

Both follow a club of eccentric people with a lot of fan-service moments. Both series feature rather highly perverted dialogue and does not shy away from exposing female flesh to it's viewer. Both have similar humour however Ebitens is more generic and easier to understand to the point of being ''dumber''.

Seeking a cure for his depraved masochism, Taro Sado approaches the Second Volunteer Club on the recommendation of his best friend, Tatsukichi. There he finds the help of the violent but kind Mio Isurugi who promises to beat the masochism out of him by any means necessary. Will Taro be able to survive the assaults of this upperclassman, the overly-affectionate attentions of his mother and sister, and still lead a normal school life? Unlikely. But will he get over his perverse fetish? He sure hopes so.

Both are sexually charged anime with quirky characters and rather blunt ecchi humour. Both share a decent amount of character tropes including traps, tsundere's and exposure.

Both series are full of crude humour. Kill me baby however has no ecchi content but shares the otaku pandering aspects that Ebiten also possesses.

Both series pander to the fans of anime. While Ebiten is a more standard approach Genshinken is somewhat more unusual in most cases. Still both series run their tropes somewhat similarly when used and while Genshinken is definetly a lot more adult about them they still exist.

The series revolves around a private high school whose student council is chosen entirely by popularity vote. Because of this, Ken Sugisaki is the only male representative, in the otherwise all bishojo student council, that may enter the “sacred sanctuary” of the council’s meeting room. At the behest of Council President Kurimu Sakurano, Sugisaki records the minutes of the council meetings, which devolve into daily conversations about the students’ lives and interests.