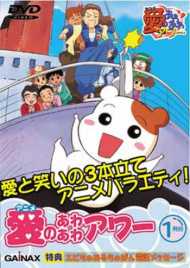 $10 can not only buy you a cute hamster; it also get you a devoted housekeeper who will cook, clean, put on suntan lotion, and cheer you on when your relationships get stale! Does it seem like a dream? Then picture what life would be like if anybody who calls your house gets to know the contents of your underwear drawer! If you can’t imagine what rodents and ecchi have to do with each other, then enter the life of the hamster Ebichu, her sexy master, and the good-for-nothing boyfriend Kaishounachi, and see why a talking hamster can be such a bother!

StoryWrong hole! That’s the wrong hole! If the above statement seems utterly harmless, then I congratulate you on not being a filthy minded perv. For those who started picturing lewd acts in your head, number one: seek help, and number two: welcome to the world of Ebichu! This anime follows the misadventures of a ten-dollar talking hamster, her master, and those around her. However, do not expect a family-friendly treat about a cutesy animal doing housework as this entire show is about sex. Essentially the ‘plot’ plays out like a running commentary on the master’s love life, either through Ebichu’s naïve ramblings or actual physical representation. Without a doubt, Ebichu’s greatest asset is its rude, crude comedy. The fact that this series doesn’t tend to hold back makes it all the more entertaining; it has no problems with nudity, sexual activity, fetishism or… uhh… ‘adult toys’. The title character’s seeming innocence combined with her misguided sense of ‘helping’, sets the scene perfectly for some cringe-worthy humiliation, whether it’s Ebichu revealing to the world the master’s ownership of a large green dildo or informing her mother about her daughter’s nighttime activities. Sadly, as there is a lot of wordplay, a large amount of the humour could easily go over western audiences’ heads. Taking words and phrases with double meanings so that seemingly harmless sentences take on an altogether different meaning makes for a good laugh, but not so much if you don’t speak the language. One scene comes to mind where Ebichu gets locked outside and calls out to be let back in. While what she says is innocent enough (hurry, let me in), it also translates as “Open your legs! Stick it in, please! Stick it in, don’t tease me!” To those who don’t understand Japanese (or don’t have the luxury of translation notes) the wit of this scene is lost as – depending on how it’s subbed – either the innocence of her cries is lost, leaving the rodent randomly yelling filth through the window, or utter confusion will set in as you wonder why the master and Kaishounashi are getting turned on by a damp hamster yelling for help. Unfortunately, the biggest problem with Ebichu is that it relies far too heavily on the same jokes and thus becomes worryingly predictable. You know exactly what’s going to happen: our furry protagonist will say or do something that will embarrass/piss off her master that will result in a bump on the head, a blood stained wall and a lifeless furry lump laying on the floor. As such, certain aspects of the show quickly start to feel stale – the ‘Ebichuman’ mini-series was mildly amusing first time round, for example, but not so much the second or third times.AnimationWith its bold outlines and bright colours reminiscent of Roy Lihtenstein’s comic book style artworks, Ebichu boasts a graceful an- I’m sorry I can’t do it. This series looks like it’s been drawn by a fourteen year old who thought it’d be fun to scribble some dirty doodles all over their school desk with a brand new set of markers.SoundSplat! Splot! Splurt! Fap Fap Fap! Squeak squeak. Uuuuuuhhhhnnn Aaaaahhh! Thwack! The array of sound effects certainly makes up for the lacklustre animation by enhancing Ebichu’s slapstick nature. While the same noises appear time and time again, it doesn’t seem too repetitive – though Ebichu’s squeaky feet get seriously annoying after about two seconds. Sadly these accompanying sounds make much more of an impact than the series’ opening track: a nondescript and cheesy tune, which, while it contains apt lyrics for the plot, sounds altogether too innocent for the crude content that follows.CharactersHalf cute, half irritating, Ebichu herself is a bit of an enigma – in that I can’t work out if I want to hit her myself or give her a piece of camembert. Her naivety regarding human sexual practice and what is and isn’t appropriate to broadcast to others, is the series’ main source of humour. Her frequent cock-ups regarding the master’s sex life make her regular beatings wholly understandable if not supportable. At the same time her cutesy appearance and adoration of food just makes her seem like a regular pet and suddenly the hamster becomes a pitiable victim of domestic violence – anyone have the phone number for the RSPCA? Meanwhile, Ebichu’s owner portrays possibly the worst example of women anywhere. Aside from her violent tendencies towards the adorable creature, her utterly pathetic clinginess to Kaishounashi makes it difficult to hold back the vomit. Quite why the stupid cow keeps subjecting herself to his cheating ways and general bastardry is completely beyond me. The only saving grace is that her disagreeable nature makes her inevitable embarrassment all the more enjoyable to watch. Cassie’s ‘Freak of the Week’ award goes to the bizarre Maa-kun, who forms an unusual (and unhealthy) attachment to the title character. As if his sudden fixation and fancy for the raunchy rodent weren’t bad enough, seeing him then proceed to fantasise about her while rigorously rogering his girlfriend brings about whole new, disturbing levels of wrongness. I’m sorry, but when a guy’s sexual appetite only goes ballistic at the thought of something small and furry – that doesn’t reside between his girlfriend’s legs – it’s about time to give in and call the men in white coats.OverallI personally enjoyed Ebichu – even on a second viewing – but that’s primarily because I have quite a filthy mind and love crude humour. For those who don’t constantly find themselves sniggering at farts, bums, or knob jokes, the series’ repetitive nature will be a deal-breaker, especially since comedy is this show’s only real selling point. However, if you have a spare few minutes and fancy a naughty giggle, then you could do a lot worse than kicking back with a beer and watching this.

One of the funniest things I have ever seen.Ebichu is an awesome hamster who manages to relentlessly screw up her owner's life by talking too much. Her innocent honesty just doesn't suit this human world. That's pretty much all there is to it, but it's very entertaining, and teaches a lot of dirty Japanese words to stun your friends with. Great music too. 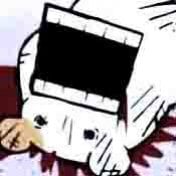 This anime is strongly recommended to those that like jokes that goes under the belt. IT isn't much of a story, but you won't really need it since you will be busy laughing your ass off. And learn tons of new dirty slang in Japanese (if you're into that). The talking hamster - yes this is about a talking hamster - messes up everything by being to honest and seems in the end only be able to talk about sex related stuff. Which is in the end all we crave for too. You like it dirty and funny? Check out Ebichu! 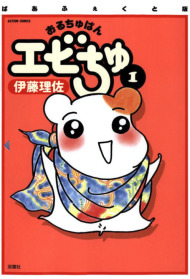