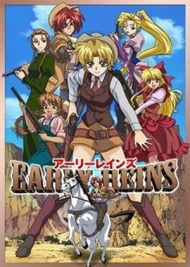 Early Reins is a tale that takes place in the Old West, in the days of stagecoaches, cowboys, and highway robbery. When a steam-train hauling valuable cargo is hijacked by rogue bandits, it's up to 6 female strangers to save the day. These ladies prove that you don't have to be a man to stop the bad guys.

Set during the early 1800s, the early years of the United States of America, Early Reins takes place entirely on a train en route to Sunshine Hill, shortly before it gets hijacked by robbers. While the soldiers onboard are caught unawares, the tables are turned as several women on board manage to stand up to the robbers and fight back. The heroine of this story, Margaret Hart, a young woman determined to become a sheriff, but lacks experience.Early Reins is one of the rare anime that is a regular straight up western. Normally when an anime takes influence from westerns, it's usually just the visual and tonal motifs incorporated along side another genre, such as with Cowboy Bebop, Trigun, Gun X Sword, El Cazador de la Bruja, and Coyote Ragtime Show. But with Early Reins, it's actually set in the actual wild west, and it's pretty refreshing to see this genre played straight in anime form.In my research for this review, there does seem to be a few other western themed anime and manga, along with the odd Japanese developed video game, such as Wild ARMs, but it seems to be far and few between. Which is a shame, because there is such an untapped market for western themed manga and anime.Unfortunately, there isn't much to say about it outside of it's basic plot synopsis and to point out that it's one of the few anime that plays it straight as a western. And since it's only 40 minutes long, there's not really room for much plot or character development, along with not much to talk about with outright spoiling a lot of it.I know that it seems like my review isn't exactly all that complimentary towards Early Reins, but I actually really like this short OVA, and I wish there was a few more episodes. Sure, it's a bit cliched, but it had a certain charm to it that a lot of anime doesn't. It would have been neat to see our main characters as they went about their daily lives in an old timey western town, with each episode featuring a new conflict for our main characters to deal with.It wouldn't even had to have a ton of episodes, maybe ~4-6 episodes in total. But I can only talk about what is available, and what is available is a one episode OVA that's just OK, which is a shame.

the story is just a basic train robbery however the plot twists are insane so it would be an 8/10. the animation is amazing for its time but decent now so ill give 7/10. the sound is amazing the guns, music everything is the best 10/10. Characters okay so here is where im a bit confused on what to put but there is some character that you will LOVE the engineer, Laura and the sheriff girl amazing characters and Laura is so damn badass best female character in anime however some of them are very annoying (they will grow onto you in the short movie) but they make up for it the villians are amazing, no crazy plot armor nothing like that at all so at the end of the day 9/10 would have been 7/10 but the annoying characters made up for it. overall i can easily give this anime a 9/10, short,plot twists, badass characters, annoying characters, cool villians, gross villians, wild west, no super powers just guns everything you would want in a wild west anime i 100% recommend giving this a try ESPECIALLY if you like wild west type movies and animes.

This Movie is just mehhhh. Its noting special. It was somewhat dull honestly. The character weren't that interesting and niether was the story. *KEEP IN MIND THIS IS MY PERSONAL OPINION*