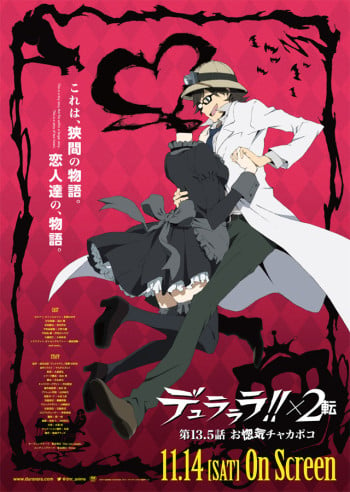 If you're looking for anime similar to Durarara!! X2 The Second Arc: Onoroke Chakapoko, you might like these titles.

Kuraki has taken his grandfather’s ancient sword to the Shinnagi festival for an ancient cleansing ritual, and finds himself inexplicably drawn to a beautiful shrine maiden. As night falls, the priestess is revealed to be Nanachi, the son of the guesthouse Kuraki is staying in. The bond between the two is strengthened as they discover they share the ability to see spirits and use the ancient Japanese magic of Izumo. However, on the night of Nanachi’s initiation as a shaman, Kuraki accidentally sees a ritual sacrifice that is an attempt to break the curse of Susanoo, and becomes the target of the newly instituted and blood-thirsty leader...

The Shimabara sisters are a study in contrasts. Practical Minami, devious Yuuhi and kind-hearted Ushio are not short on disagreements... until fate changes their lives. A mysterious god emerges from the sea, one that will follow their every command! How will their lives change now that they control the most powerful force on the face of the Earth?

One day, when they were children, Maya and Ami were out playing in the summer sun and happened upon a mysterious and legendary creature known as a Tsuchinoko. Lovingly naming it Tsucchi, the pair decides to keep it as a pet. Now the two girls must train themselves to avoid Tsucchi’s attacks, try to find out what it likes to eat, and attempt to find a partner for their beloved new pet.

After traveling to the lands beyond her home, a young woman named Nakoruru returns to her home village of Kamuikotan to live a peaceful life. All the people of the town want of her are stories from her trip, and use of her ability to listen to nature and the creatures that live around them. But Nakaruru begins to have terrible nightmares and flashes of horrible memories from her time away, and of a mysterious woman trying to convince Nakaruru to kill. Nakaruru is not the only one going mad; in the forest, animals are frenzying and starving for blood. Will Nakaruru be able to decipher the meaning of her nightmares and save the land, or will innocent lives be forever lost?

Several centuries ago, ten warriors combined their power to battle against the Demon King – a warrior of great power and evil. Though he was sealed away for all eternity, in present-day Tokyo that seal has begun to weaken, and lesser demons known as Kyouma have begun to appear. It’s up to the hesitant Juuto, leader Kyoshiro and the other reincarnated warriors to come to terms with their destinies and defeat the powers of evil once more.