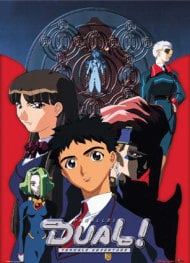 StoryAfter a recent trip to Thailand, I learned about the intricacies of Buddhism, including the finer points of Karma. I guess I built up a significant amount of negative energy after forcing Anime-Planet’s reviewer, therik, into watching as many loli-centric shows as I could think of. This time, sothis decided it was *my* turn to be watching my least favourite genre and reviewing it. And so Dual! Parallel Trouble Adventure found itself at the top of my watching list. Damn, payback is a bitch. With most people comparing it to Neon Genesis Evangelion, I was expecting a blatant rip-off such as Argento Soma. To me at least, Dual! seems like a completely different beast, taking a more whimsical view to portray the harshness of war. Introducing the main protagonist as a loon who can see giant robots fighting outside of his school, Kazuki’s bizarre gift makes for an interesting premise. Instead, the writers decide that a complex multi-world theory is a much more fascinating story and surge ahead, leaving bafflement in their wake. Transported to a parallel universe where everything and everyone looks the same, our hero soon discovers some glaring differences – most notably that the mech here are real and piloted by those with a double X chromosome whilst wearing questionable uniforms. Alongside this time-space physics lesson is a typical harem setting that develops over time. Many of the new females he meets are reminiscent of those in the sister universes of Tenchi Muyo, but somehow Dual! lacks the personality adhesive that binds the unlikely group together. That said, instead of the over-the-top mech battles being my favourite part of the show, brow-beaten Kazuki's home life proves most endearing. The lives of pilots collide with kids trying to *be* kids, the hot-headed Mitsuki attempts to come to terms with sharing her life with a boy and ultimately character rather than story development is the key to the hit or miss entertainment. Lacking the battle flair of Neon Genesis Evangelion, or the quality highschool romance and drama of Love Hina, Dual! instead tries to eek itself a little niche in the world of anime. Whilst certainly not as well crafted as the previously mentioned titles, the show is still a safe haven for tried and tested characters and scenarios. Don’t expect any fresh story telling or anything to completely blow you away and Dual! is quite good fun in its own right.AnimationProduced in that awkward time around the turn of the century, Dual! bravely dabbles with some ZX Spectrum produced effects. The occasional robot rendered by an incapable PC contrasts horrendously against the paint daubed backgrounds. Showing off its historical relations, the character designs are extremely reminiscent of Tenchi, especially those in GXP – in fact many of them may well have been borrowed from its predecessor as they look so remarkably similar. Although not bad for their age, there are numerous moments when facial features seem out of proportion. For a mech show, the action segments seems to run on 4 frames per second, giving a horrendously jerky movement to sleek robots that should instead be performing aerial acrobatics.SoundIf you have ever watched bad 70’s sci-fi, you will be familiar with the psychedelic keyboards and computer generated “noise”. Unfortunately, we are now in the twenty-first century and the soundtrack definitely has that out-dated feeling. With an opening track that sounds more like a drunken karaoke session, the closing song fares a little better by being considered “passable”. As usual, when I watch a dual audio series to be reviewed, my sadistic side means I sample both the English and Japanese voice actors. Unfortunately, Dual! reaffirms my belief that dubbing from the 90’s was done by a lacklustre cast dragged in from the streets. Unemotional and flat-toned, each of the characters remains utterly unbelievable. Luckily, the Japanese seiyuu stop this show from being completely terrible, by being everything the American cast wasn’t; likable, three-dimensional or simply competent.CharactersThose familiar with the aforementioned Tenchi sagas will probably find Kazuki as an old friend, as well as the bevy of beauties surrounding him. Although lacking sexual tension, the dynamic between the genders makes for enjoyable viewing as a typical harem style situation unfolds. Clueless to the romantic feelings of the numerous cute girls, Kazuki is very much a stereotyped character that has been created numerous times before. However he does have a few quirks that set him aside from the typical ecchi protagonist, such as a definite attraction to one of his close female friends. The girls in Dual! come straight from the anime manual; D is the emotionless alien who finds solace in Kazuki's presence, Yayoi struggles to keep her panties on whilst Mitsuki Sanada couldn’t act more tsundere if she repeatedly smacked Kazuki upside the head with a giant mech. On the other hand, Mitsuki Rara is like the reincarnation of Belldandy – kind-hearted, lovable, very pretty and frightfully naive. Overall, the cast lacks something, and it is difficult to put your finger on exactly what. Although perfectly fine, it feels as if they fail to live up to their potential and ultimately disappoint.OverallMaybe I rated the series a little higher than it deserves because of my long-running love affair with the Tenchi franchise; the animation is sub-par, the storyline bizarre and the characters a blatant rip-off of a myriad of higher calibre shows. That said, it is watchable, and very, very different to a lot of the overly polished series that have reared their heads this century. If you enjoyed Neon Genesis Evangelion, RahXephon or countless other mech-centric anime, then Dual! Parallel Trouble Adventures could well be the piece of fluff to tide you over to the next title. And no, I still don't particularly like mecha.