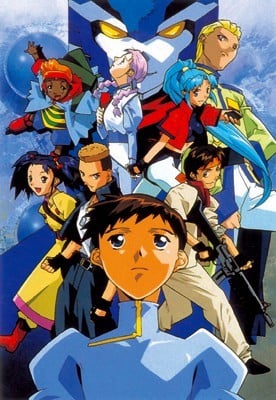 This is a great show to watch for Sci-Fi fans. The story presents some really good ideas with notable influences from THX 1138 for Datania (the city at the center of the story) and is very similar to Ergo Proxy in the world, theme, and unfortunately in the ending, which is left open to interpretation, or rather, in this case, it seems to be cut short, probably due to cancellation. The story takes place in 2187, at this point in the world several wars have devasted the land, destroying all vegetation. It is no longer possible for humans to live on the outside, especially when the sun is up. So people have created dome or underground cities to survive. The atmosphere makes it impossible to communicate over long distances, so cities have lost track of each other. Datania is a city that breeds humans, mostly children, to use as slave workforce, suppressing their emotions and making them obedient to just follow orders without thinking. But some people have been able to break free of this control and look to scape this city in order to survive and live free of the control. In fact, some people outside are also looking to help these children escape. Shu is one of these kids that have broken free of control and successfully scape with the help from people outside. Character development is about Shu learning to think by himself and take control over his own actions, emotions and also about learning about the world and how do we get to live this way. As the story progresses we learn who is really controlling the world they live in and that the aftermath of war may not have ended. Both animation & sound are outdated and lacking quality.