Drugstore in Another World: The Slow Life of a Cheat Pharmacist - Reviews 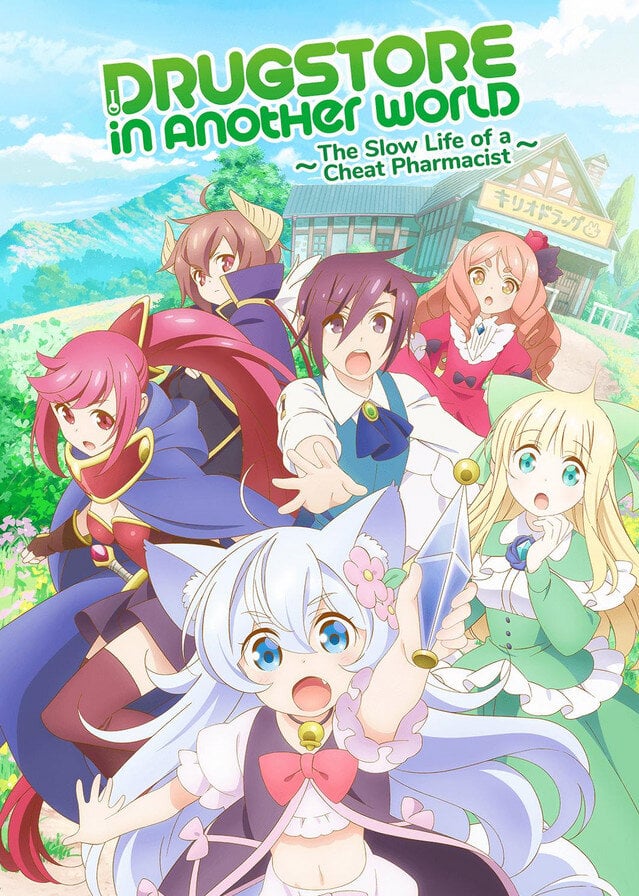 With everything happening in the world right now, this show feels like medicine for the heart 💖

Drugstore in Another World is a pretty average isekai. Much like I've Been Killing Slimes for 300 Years And Maxed Out My Level, it is a breather with no actual conflict aside from the occasional mention of a war between man and demons. We follow the daily life of Reiji Kirio who was a corporate slave before somehow just walking into the world of Kalta and sets up a pharmacy there. He resides in the pharmacy with Noella, a werewolf girl who is the mascot of the store; and Mina, a self-denying ghost girl who claims to be the guardian deity of the pharmacy.

To be frank, the show does not feel like an isekai because it starts with Reiji literally already in the world instead of how some shows would show that the lead character at the least died and was reincarnated. Really, I did not even know this was meant to be an isekai until I read the summary of the anime.

It also changes a lot from the light novel and manga, some good, some average. For instance, we know that Noella is the mascot and considers Reiji her master, but in the original story, she became devoted to Reiji because he saved her life/healed her. That's not really referenced at all in the anime adaptation. But at the same time, Noella expresses her desire of protecting her master which is something that she does not do in the manga.

Much like with I've Been Killing Slimes, there is really no hook that would keep the viewer itching to see the next episode because there is no conflict or if there is one, it's immediately solved before the episode's over. This could be because the manga actually was more violent so it falls on softening the tone.

The characters are likable. Reiji is a good lead character, but he is someone who practically is nigh-invincible. What I mean is that due to his knowledge of chemistry, there really is no challenge. Noella is also cute, but for the most part, she is there to be the cute moe girl. Mina is actually a pretty good character. She gets something of her own storyline twice with trying to leave the house due to being tethered to it, and we get a surprisingly touching moment where she is sick and gets to hear the words of her late mother. Ezil the Demon King is probably my favorite. He is the one who is responsible for the outside conflict between two waging races, but in truth, he is more of a clueless child who had to learn that just because he was the Demon King it did not entitle him to special treatment. His infatuation with Noella is also really cute and his reserve to pursue her is kind of endearing.

Animation; it's fine nothing too amazing, but it gets the job done for the show. The soundtrack is also serviceable.

Cheat Kusushi no Slow Life - Isekai ni Tsukurou Drugstore has been really disappointing. I am ALL ABOUT the "isekai" genre and I especialy like the "OP" or "Cheat" genre when ithey are set in another world. Howeever, they've really done a terrible job with this one.

No. I didn't read the manga. Yes, I just watch anime. No. I didn't have expecations coming into the show...not exactly. I DID think that a show called "Drugstore in Another World...Cheat Pharmacist" would be more... I dunno, just more.

In the end, the characters are all standard, the animation itself is pretty basic, the sound (voice acting, music, and effects) is just barely better than average, and the backgrounds are super-lackluster. The worst thing is legitimately the story. The story is a huge letdown. The creators could have made the pharmacology the main selling point (Like Dr. Stone and the inventions/science or Ascendance of a Bookworm and the various methods used to bring civilization to a backwards country), but they went with...let's just make a 4-shot scene that repeats with a catchy tune and call that our crafting interlude. Then we can just re-use it over and over and over and over and over... /sigh

Like I said... This could have been something great- just because they could have shown him actually make the "medicines" and explain all the finer points of the herbs and ingredients he uses in them. Oh well. I'll finish it out, but it's not really one I'll be recommending unless you are an absolutely die-hard-fan of "isekai", "OP", and "cheat".

This is a fun Isekai that doesn't take it's self to seriously. It's a nice little Anime to watch between serious animes. If you come to watch this show expecting the story of one of the serious shows you'll leave dispointed.

OH LOOK WE GOT ISEKAI BUT WITH DRUGS.

this anime as you reading this is about anime that making potion (drugs?) and other stuff that only exists in there world simply as that and a loli.

I'll just make my review short because probably someone gonna attack me and say "this anime is so damn cute & wholesome why the hell you hate it is your taste garbage? " and yeah I didn't like this drugstore slice of life isekai thingy I just can't like it but I do enjoy some of the wholesome anime like Yuru Camp, K-On, Tamako Market and the list goes on. So if you were a person who enjoy all types of isekai and likes slice of life, then Drugstore in Another World is for you.