Dropkick on My Devil!! Dash - Reviews 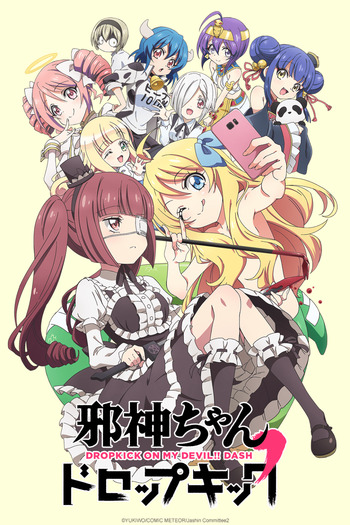 Just got done watching Dropkick On My Devil! Season 2...so, I did love the first season for what it was trying to be...mostly. Jashin-chan gets summoned by Yurine and tries to kill her in order to return to Hell but fails all the time. The bloody and gory punishments she inflicts on Jashin-chan are kind of repetitive at times and gets boring, but here was also the suffering of the fallen angel Pekola and her perpetual poverty that also could give a few laughs...if you like seeing the misfortune of a character.

The problem with the first season is it failed to really make the audience invested with the characters because it drops them into the middle of the story instead of properly introducing them. The second season does do this a little better as towards the midpoint of the season, it introduces another angel named Pino who tries to kill Pekola and Poporon to get a higher ranking in Heaven only to have her halo destroyed and get stuck on Earth where she now wants to get rid of the Lord, take over Heaven as the new god and then destroy the underworld and the human realm but works as a custodian opting to lay low until her halo regenerated. Then there's Kyon-Kyon and her sister; they are both Jangshi with the latter being cursed into the form of a panda bear.

Comedy-wise, they do have slightly fewer scenes of gore to illicit a chuckle instead taking jabs at how the name of the show should be renamed because Jashin-chan hardly does her signature dropkicks anymore. The humor is just as meta as the first season, maybe moreso.

Animation's still passable. Nothing great but fits the feel of the anime. Voice work is fine, the opening and ending themes are pretty good..ultimately, the season does make small improvements here and there, but it's something that you shouldn't immediately go out of your way to watch.

It is available on Amazon Prime, but there are also streaming websites like KissAnime to watch it from if you do not have the time or effort of acquiring Amazon Prime.