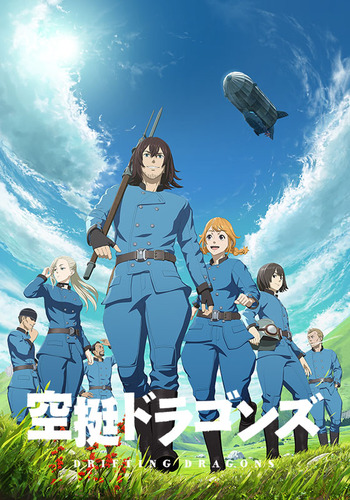 Hunting in The Clear Blue

Every now and then an anime will come along that will just completely pass everyone by, no matter how impressive it is. And I can definitely say that Drifting Dragons may just be one of the most underrated anime of all time. It at least is that for this current year. This anime takes great inspiration from Monster Hunter and Guns of Icarus, bringing a fresh, interesting Fantasy world to the table that just feels adventurous by nature, which is rare to come by in anime.

The Worldbuilding is what contributes a lot to the score I'm giving it. This is a world where Drakers earn money by hunting huge, incredible creatures on the skies. They live in the sky on these giant flying machines, day in and day out tracking down strange beasts, that have an incredible variety and abundance. The entire economy is based around trade between cities on islands above the clouds, reminicent of Xenoblade Chronicles 2.

In this world, Drakers are like seafarers, living in big blimps. And I don't know about you but it's just an awesome concept in general to me. This anime plays into it greatly by being one of the most beautiful at every turn. They never shy away from focusing on the scale of the world, and the Dragons, and these ships. Everything in this anime is huge and beautiful. Every new Dragon introduced is just a sight to behold.

The Animation and Sound help a lot with this. The Animation displayed is some of the best CGI anime I've seen come out of the medium, if not the best ever. They make such great use of so many effects which are best conveyed with CGI, such as the dragon pictured above, having enough detail to look magnificent from a distance like that, and having a natural flow and motion to it. It feels huge, even next to the large airships, and the textures are great. They're just beautiful. No wonder the characters want to cook em all up and stick them on a nice crispy kebab!

Some of the character animation is out of the ordinary for CGI, characters looking full of life instead of the usual stiffness, with a lot of free expression.

So hard to not look at the camera

The soundtrack is magical, adding a lot to the fantasy world setting, always amplifying the terrific atmosphere.

The Story is more episodic, following our main team of Drakers as they hunt multiple different dragons, usually a different one every episode, which also will focus on a different character. But the pacing never stops being dynamic. Some episodes will feel more like a slice of life, where a small dragon is wreaking slight havoc onboard the ship, while others will be more epic in scale, like the team fighting Pirate drakers, or hunting a massive dragon in a large storm. 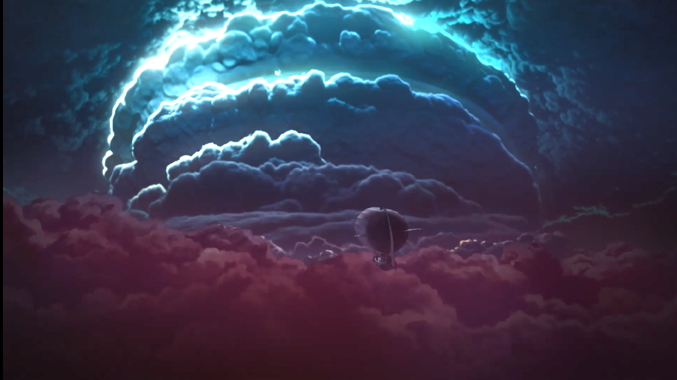 Have I mentioned how beautiful this show is? The backgrounds are some of the best I've seen from anime period.

All of these different episodes always serve to build up the world and characters more, teaching us through example what a day in the life of a Draker is like in such a fantastical reality.

The Characters are actually no slouch either, though the focus is more on the world and visual spectacle. The main focus of the anime is more of a Cooking theme, with the main character Mika providing a passionate voice to get the viewer just as excited about eating dragon meat as he is. There are entire scenes dedicated to explaining how to prepare certain dishes and just making it look so delicious, you'll find yourself wanting to eat Dragon meat too.

Jiro, Takita, and Vanabelle are also focal characters that develop a lot. Jiro is my personal favorite, a very relatable and realistic character that progresses a lot throughout the show. It's like watching him grow up in a few places. In this kind of show, I was surprised to see such a down to earth take on relatable issues, and how full of personality the characters are. It's not always that you get a show like this, that has a real sense of truth to it. How people behave in real life... the sense of comraderie coworkers that work to survive would share, the feel of it is all there. The dialogue is great, it never feels awkward or out of place, like something written by robots either.

Everything in this anime is super full of life and beautiful.

Now, the main argument against this anime is that the Drakers are like Whalers, which is a bad thing. Let me put this argument to rest. It is fiction. Dragons are not Whales. This world is a fantasy world, and it's all fiction. Dragon's are not even real. There's no need to crusade for the injustices against fictional creatures that are being hunted in an anarchic fantasy world.

If you can get past that one aspect, this anime has a lot to offer.

The best way to describe Kuutei Dragons is 'different'. Calming yet has enough action to keep you interested. I was hesitant before watching the first episode, but the show managed to completely draw me in by the third one.

The story follows the Crew of the a flying vessel called the Quin Zaza. They make a living through hunting and selling dragons, which are a delicacy in the world the story is set in. The series is kind of episodic. but each episode is still somewhat related to the others. What this anime manages to do really well, is combine different themes without making it seem too forced. You can feel the serenity of the world above the coulds, follow the action packed dragon hunting scenes and even get the urge to eat some nice food while watching them cook dragon meat. - 7/10

This anime is made using CG animation. While it might feel a bit weird at first, the realistic nature of CG really emphasizes the beauty of the environment high up in the sky and manages to make each dragon, the Crew encounters, look unique and stunning. The character design is good but CG animation makes them look a bit rough. - 7/10

Character development is stong with this one. The personality of the characters progresses and changes through the series, but it does so in a very subtle way across all 12 episodes. so you only notice it after finishing the series. You can feel some characters becoming more mature while others don't seem to change as much but they leave you with a  cozy feeling, as if they're your own Crew or group of friends. The obvious differences in the personalities of the Crewmembers make the series very dynamic and also showcase how every member is needed for their own unique set of skills. The anime doesn't really explore any of the characters' backstories which would have been a nice tough in my opinion. - 7/10