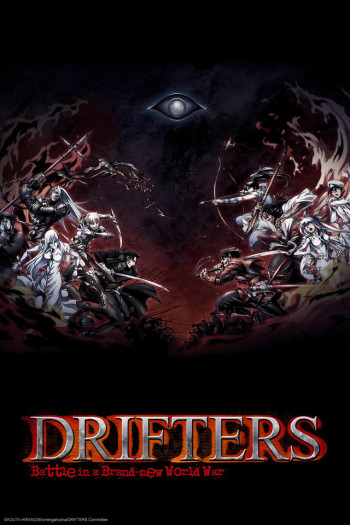 Drifters had a lot of hype behind it. Hellsing has an iconic place in anime history, and this is supposedly what comes next from the people behind it... and boy does it show. The art style is distinct and very much geared to be memorable, it has the same bits of silliness interspersed in the super-seriousness, and there are plenty of people getting hacked to bits. These are all good things.

But people forget that while Hellsing is definitely awesome, it isn't all that great as a show. Sure, it's not bad, but it isn't great. Likewise, Drifters has not reached a point where I can say "wait, this is actually amazing". It's counting on a second season for that, I suppose. But even so, it feels like an incomplete creation from the start. While there were questions in Hellsing that were there to tease out interest, here there is a far less subtle approach.

The rule of cool is more than enough if done correctly. Hell, some of the greatest successes have relied so heavily on it that there's very little left beyond. Drifters has everything you'd expect. Swords, fighting, some supposedly epic plot, super-powers, a struggle of good (but somewhat evil) and evil (with supposedly some good), some moments that just beg "take a screenshot of me and show the world how glorious this is", and so on. This could have been enough.

But what can I say? Right now, a lot of shows have a cool-factor that's pretty high. Viewers have become jaded to it, or want it to be so blatantly egregious that Drifters just doesn't register. Yeah, another shot of a guy smiling with things burning in the background for the fourth time this episode... not gonna cut it. The whole thing about being cool is that you can't just copy things, you need to do something that stands out. Not really a thing here.

What Drifters doesn't have is a story or characters that feel special in any way. The writing isn't complete garbage, it just isn't good. I'd expected the people behind Hellsing to learn from their mistakes and kick things up a notch. They didn't. It isn't so much that the story is bad, it's just that it is more or less the title and a couple of extra sentences, and the rest is irrelevant. It's an excuse for fight scenes and being cool™.

In many ways we've not seen much more than character introductions and some reason for a war. There are some cheap attempts at emotional manipulation to get us to care, but those seem to go against the character of the show. The second season might make this better, but here, beyond the gaping plot holes, we have a show that didn't really end on an ending note. It's just sloppy writing.

The characters... they're one dimensional. There's no need to be gentle about this. This isn't their role to be rich and complex, they're supposed to be fighting badasses from planet badass. I don't expect much in the way of character development in the second season. Hell, the protagonist's character can be summed up as "lives to fight and nothing more". It just isn't the kind of show that has more than that, despite some undertones that pretend as much.

Despite the qualms I have with the story and characters, this is pulp action writing done well. We have a premise, we have excuses to fight and characters that like fighting and... go. That's broken up by moments of levity (which are childish and not particularly well done), as is required by this type of format, and there's nothing more to it. It's a decent ride, and the writing focuses on what the show is supposed to be about.

Is there a contest for "most annoying bird voice" in anime that I haven't heard about? Seriously, screw the people behind this terrible idea. There are characters that are voiced in annoying ways, there are others which are voiced pretty damn well, but if I have one qualm about the voice acting is that compared to Hellsing where we had Walter and Alucard, here we get a much less iconic approach. The soundtrack is actually pretty good, and the effects are nice though.

I have to note that I liked the opening. It's got a nice catchy song, the animation is rather raw and sets the tone for what the show wishes to accomplish. That's probably the high point of the art as far as I'm concerned. The low point is the annoying way they draw eyes... I get it that they want to have something special, but it seriously looks stupid in a show that tries to be cool.

Drifters was probably always intended as a spectacle, and is written that way. I have some issues with the voice acting, and the animation is far from perfect... but we do get a good dose of wow-factor. That's all that's required. Also, the opening is a breath of fresh air.

Drifters is rather good. It toes the line between childishness and serious business, and that's fine. If anything, my main issue with the writing is the attempts at being deep which are tacked on. So far, I can recommend the show for people who want to enjoy the standard Sienen action show executed straight up, if a bit on the childish side.

This anime was exceptional. It didn't take it self too seriously. It was just so much fun to watch!

Its a type of anime I would recommend someone to watch if he just want to sit back and enjoy good explosions, head cutting and just alot of blood. The characters in this anime just live to fight, nothing more and the creator really manage to capture those people in the best way possible.

The story wasn't all that great. Its not bad by any mean but I think it leaves something to be desired. Characters backstory only get hinted every once in a while but nothing. And the story itself is really plain. I got more to say about the story but I just don't want to spoil to anyone so I'll leave it at that: it was okay and it still just the first season so it can get better in the future.

The animation is the strong point of this anime. The character design is great, the animation is sharp. Watching Toyo cut someones head off is always fun. I think the creators made an exceptional work in that deparment. They manage to capture the glomy atmosphere and the rather strait forward characters well. Evreything from the characters themselves to the scenery looked great. The movement looked organic. The fire and explostions were perfect. And the blood was really over the top but this really suit that show a lot.

The characters were simple yet I think thats what made this anime so much fun. You have the pirate looking guy, an evil bastered with no respect that will do everything to win, a guy that lives to cut men head off and a badass archer that you don't want to fuck with. Simple characters that make for a rather funny group. We also see a badass pilot for a couple of episodes that only screems bakayaro (moron) at everything he sees, kinda childish but I couldn't stop smiling everytime they showed him.

It's not an anime they will stay in your mind for weeks after watching it, but for what it is its really a great one. Highly recommended.

Drifters is truly amazing right from the get go, the story is a fresh new concept leading up to an amazing showdown, the animation is flawless and the characters are very well made. The only negative thing i have to say about this show is that it's not comming out fast enough.

If you like fantasy and extreme violence then this is right up your ally.

Historical figures using their characters and greatness in the wars of another world is a great concept. So why not actually do that instead of bastardising everything into bullshit?

Take Nobanuga for example, the method Nobby uses for saltpeter wasn't invented until hundreds of years after his death. He also constantly tells them to be careful when mixing or handling the ingredients which is also complete shit.. gunpowder needs an ignition source. Think handling fireworks. Also those bags of gunpowder being thrown about wouldn't explode because the gunpowder isn't encased. It would simply burn quickly. *

So, basically 50% of his screen time (Mr Gunpowder) is a complete fucking lie

I honestly wouldn't care and probably could sit and enjoy but shit is presented as facts even with captions and illustrations and goddam that's just plain wrong man. If u gonna use technology then at least get it right but better still just don't use it cos it ruins the fucking fun anyway!

The rest of Nobby's screen time is 50% "ah yes this reminds me of <insert Oda Nobunaga historical fact 144>" and 50% woman = BOOBS h0h0. I daresay the boob part is acually the only part of his character they might have got right.

To see Nobby (or other historical figures) go at it with the technology available in the fantasy world using his cunning and personality to conquer... now that works and would be fuckin awesome to watch... but this is just another piece of shite with no soul.

Reminds me of that other piece of horseshit Dr Stone. if you liked this you'll like that and i wont like you.

*I'm not an expert so mb I am missing something, but I dun think so.