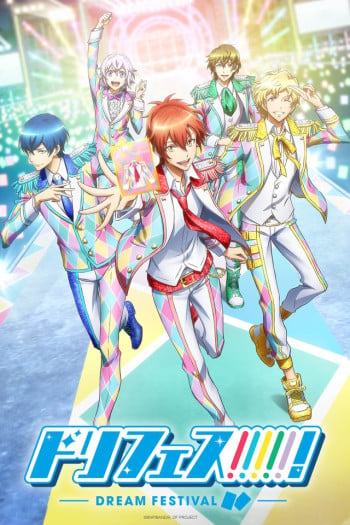 They both are very similar in the concept of idols, and training to be idols. Some character personalities in the two animes are closely related. The main difference is that Uta No Prince Sama is a reverse harem around Nanami, whereas Dream Festival! is more similar to slice of life in saying it's really focused on the life of the idols.

Both of these anime about a group of young lads trying to make it in the idol industry. Both anime have the boys attending a certain school for idols that was started by a production company. Both anime include a mixture of comedy and drama, usually generating from something in the boys' pasts. If you liked one, check out the other, especially if you liked the singing and dancing.

both anime have a very good plot and their songs are the best but i wish there was more to Dream Festival!

Ichigo Hoshimiya is an average first-year middle school student, but after her best friend Aoi encourages her to enter Starlight Academy, a famous idol-training school, Ichigo's whole life changes. She meets various rivals, becomes proficient in abilities that are integral to idols, and uses Aikatsu! cards while challenging herself with an array of auditions.

Both shows are about idols that get more awesome with special cards to enhance their performances! Aikatsu has girl idols and Dream Festival has boy idols. If you like idol anime these 2 are sure to please.

But wait, I hear you say, these are two different genres! Ah, but I have 3 words for you: Magical Boy Transformations. Also, Boy Color Coordination. And Cute Boy Assemblies. If you liked the random transformations, bishounen cast, and childhood flashbacks in one, check out the other.

A world where art becomes magic. In this world, people who can inspire passion with their Magic Arts are called Artistas, and are employed in show business. In Hoshinomori Private Magical Arts High School, where Artistas are taught, a strange new student named Ohana Aigasaki transfers into the school. Ohana is placed on the planning committee for the school's yearly Hoshinomori Summer Festa cultural festival. She spends her romantic school life with six other boys who aim to become entertainers in the future and alongside Ohana, to be the school's Artista Prince and Princess, only chosen once a year.

Magical idol boys is what brings these two anime together. Both anime are set in a school-type atmosphere where the boys shape their talents. While one only has magic during the Dream-Fes, the other has magic whenever the boys perform. And perform they do. If you liked the music and comedy/drama of one, go check out the other.

This anime is about 5 students of Ayanagi Academy, for aspiring musical performers. There are many obstacles for them, but they overcome them magnificently. If you want to find out more WATCH IT!!!! Its amazing and I think you all will love it. (there is a second season so if you like the first season watch the second)

President Tange of Green Leaves Entertainment has a plan to save the failing company. With Matsuda’s help, they develop a plan to scout raw talent form a new idol group. What could possibly go wrong there? They may not be on the A-list, the B-List, or even the C-List to start, but with a little love and a whole lot of hard work, it's possible that all Japan may someday wake up to the music of WAKE UP, GIRLS!

Part 1 of the Wake Up, Girls! movie series.

Wake Up, Girls! Movie 2: Beyond the Bottom

Part 2 of the Wake Up, Girls! movie series.

The new anime will feature the previous Wake Up, Girls! group members, but it will also add new characters.