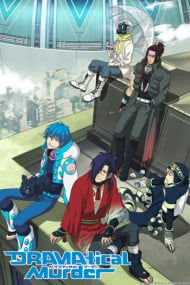 When Aoba Seragaki is drawn into the shady underworld that surrounds the virtual game Rhyme, all he thought he knew falls apart. There are gaps in his memory, people are disappearing, and a buried secret in his mind may hold the answers.

This review may contain: Some minor spoilers Mature themes Explicit language So DRAMAtical Murder is a very famous BL game, but can it's anime adaptation catch up to the quality of the game? I played the game, even thought I'm not a fan of BL and yaoi. I loved the story and all, except the explicit scenes However I WILL admit that Aoba's moaning in-game is a talent... *ahem* moving on to the review. STORY So the story of Dmmd is based on 20 something y/o man boy called Aoba (it's the blue haired one, you probably saw it on Tumblr) and him finding out his true identity (and his true sexuality). It's based around a game called Rhyme, which got popular in the city he lives in. And the game itself is causing trouble for people. I do like the story. I think it's very very interesting. Also unique because when anime/manga studios try to represent future, they either represent it as super bad, apocalyptic, or super modern future. In this case, the future is something in between, in fact it seems like a really realistic kind of future. That's what I really like. Then there's the BL part when they mate (in one case, literally mate...). And I won't comment on that because that's not my area. Either way, the story is the reason I played the game and it was amazing! They way they adapted the story and put it all together was well done. I expected a much more awkward story with everything mixed together and messed up... but it turned out well and balanced in the end. ANIMATION This is probably because the art in the game is really good, so people got disappointed by the animation. I still don't think the animation is bad tho, could've been better but still it's not bad ^^ The enviroment art is good.  I think people are a bit too harsh when it comes to animation and this series. The animation itself wasn't THAT bad. It has several sloppy scenes and besides the infamous episode 3, the animation of DRAMAtical Murder isn't even THAT bad. SOUND Are the voice actors same for the game and for the anime? I'm not sure, even if they are, they sound different.  The sound is kinda... moderate. Lacks quality, music is cheap and kind of simple, but it fits with the theme (I'm not saying that the theme is cheap and simple... no shade no T) CHARACTERS The characters are greatly done. Even thought they are very different, it really fits the concept, and even if it makes more sense in the game, I still like the character design. Characters are not how almost all the dating-game characters are. Usually there's the cute girl, the tsundere girl, the glasses girl, the loli girl... In this case, there's a gas mask boy, a nerd-but-cool-computer-whiz boy, long haired biker hulk boy  freaking TARZAN, aaaand a handsome ''ladies'' boy... shh there's one more. You won't really see that in other games, so the characters are unique which is always a + when it comes to me. OVERALL If you liked the anime, or if you want a better insight of the anime, definitely check out the game, it's really good. But the game has some concepts that the anime doesn't. I won't spoil it for you, but if you decide to play the game get ready and expect ANYTHING to happen. You're welcome. There was a huge hype over this anime but  I guess it didn't really live up to the expectations. And I understand that, it happens almost all the time with the games which get adapted to anime. Personally, I'm really glad that it got an anime adaptation. Because I enjoyed the game and I didn't play all the endings (I played only the Clear one). The story is developed well, and the ending is sooo adorable! THANK YOU for reading this review! ^^

Some Spoilers Ensue: Before I begin let me just say that the low scores are for the anime only. For those of you who don't know, this show was derived from an explicit yaoi dating simulator. The visual novel featured 12 different endings. There was usually a good, and at least one bad for every character. There was also a specific ending for Virus and Trip as well. The true end to the game was meant to be the true end to the anime. If you haven't played the game and don't mind gorgeous and explicit yaoi boy sex, I recommend you forget about what you watched, and invest the 30 or so hours into Dramatical Murder...then invest another 10 or so into Reconnect to get the full background of the characters lives. I will just say that I absolutely love this game. Nitro+Chiral are yaoi game masters and I have to at least give the anime writers credit for trying to fit this entire game into a 12 episode arc. Story: Honestly the story is very complicated. It starts with Aoba working in a shop, then meeting up with the boyfriend squad, then going after Toue who is trying to take over the world. It is very elaborate and also extremely engaging. The problem with the show is they tried to fit 30+ hours of story into 12 episodes. This caused the story to lose its magic and become somewhat of a mess. I understand the writers were trying to give each character's arc an episode, but some required much more for people who haven't played the game to come to love these characters. It was dissapointing. In my opinion, most of the people who wanted to watch this show in the first place were probably yaoi fans, so taking that aspect out all together made me really feel like I was jipped. I understand the anime is on TV so we won't get any hentai (sadly), but I was at least hoping for maybe a less linear storyline so I could see all of my favorite moments from the game acted out and not just thrown together. I wanted to see the bad endings as well but that's just me (And just BTW, taking out the bad ends means there were absolutely NO dramatical murders in the show...lol)...Also bad form with Virus and Trip only being in the show for like 2 minutes lol Animation: ........I'm sorry, but it is made fun of a lot because it is really bad. The dialougue is terrible as well, but the animation doesn't even hold a candle to the game. I feel really bad talking so much shit, but I just feel like this show could have done so much more. The only characters who looked even remotely okay were Clear and Ren. The Rhyme worlds were okay and Oval Tower and Glitter were okay but the guard dogs were so laughable...I just don't understand the need to change miniscule things like that. Sound: To be fair, some of the dialougue in the game was laughable as well, that was a lot of the fun of playing it, but here, it's like they were trying to put things in there to mess with us gamers...(I.E. I'm going inside you, Aoba dropping to the ground in front of Ryuuhou, etc...) Maybe it was supposed to be funny, but I just found it annoying lol. I was also dissapointed in the opening and ending themes. I WISH they would have used the themes from the game! Most were gorgeous. The voice acting was well done, mostly because these voice actors are very good, but like I said, the dialogue was laughable so the feeling you did get became muddled. Characters: I adore these characters. All are diferent and unique including Sei, Toue, and Virus and Trip. The problem, again, is that each were only given one episode for you to get to know them. It makes for 2 dimentional characters when they should be 3 dimentional. Each character's arc you should fall in love with them along with Aoba. You should fall in love with Aoba as well...also I thought it was funny how they portrayed Mink. He's one of the most extreme individuals in the game, and they made him into a puppy in the show. Again, bad form. Overall, I'm sorry to the people that like the show. I just know how much better it could have been and it makes me sad it was nowhere near that calliber. I highly recommend the game (and any game by NC) but this show sadly missed the mark this time. 3/10. Watched Subbed.

In the future where the game "Rhyme," a virtual fighting game, is incredibly popular and people possess "AllMates," convenient AI computers. Aoba leads an ordinary life, working at a junk shop and living with his grandmother on the island of Midorijima. Unlike his friends, he doesn't participate in Rhyme, nor does he belong in a gang. However, when rumors of people disappearing spread, Aoba finds himself needing to unravel the mysteries behind the island in order to protect his everyday life. I'm glad I had low expectations for this when I went into it or else I would have been extraordinarily disappointed. DRAMAtical Murder is an anime based on a popular BL game but trying to squeeze the whole thing into 12 episodes just didn't work and it had some really strange side effects ... and by strange, I mean disappearing food with absolutely no explanation as to where it went when a character has their arms full of it in one scene and in the very next a fight breaks out and the food does a disappearing act ... like it went into an alternate dimension or something ... never to be seen again ... -_-' (I still have trouble getting over that ... I mean, where the hell did it go? o.O) ... and according to a friend of mine, granny had teleporting shoes (I didn't really notice this but I take him at his word, cause ya ... I wouldn't be surprised by that at all ...). The issues with the animation were the unexplained things like that and the instances where things came off as ... stiff. The animation just wasn't as fluid as it could have been. The soundtrack wasn't my favorite. Most of the OST consisted of electronic, techy sounding music that I just didn't care for ... though I do admit that some of the ever changing ED's were actually rather nice. The characters were iffy. I liked some of them and a few even had decent character development but ... not much ... too many characters were squeezed into these twelve episodes and I just couldn't get attached to them. Overall, DRAMAtical Murder wasn't all that great. It was decent, I suppose, but most would just call it a waste of time ... and not even a good waste of time, it was meh. ^ my favorite part of the entire anime ... 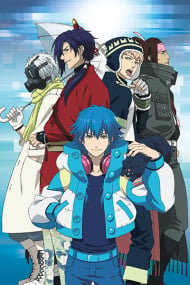 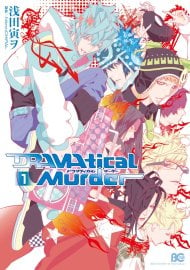