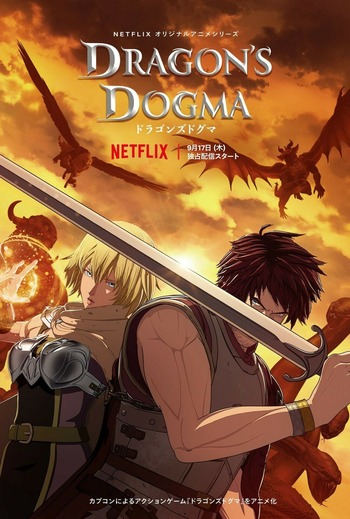 I'm writing this review because I believe, according to its rating, people misunderstand what this anime is.

This is an adaptation not from a manga nor novel, but a video game of 2012.

The beginning, middle, climax, and ending all reflect something one would see in a game.

If you're looking for something entertaining and enjoyable for a few hours this is a good anime to watch. It has just 7 episodes and each one is very quickly paced. What might take 50-100 hours in a video game to experience, is done so in just a few hours in the anime. This makes it entertaining and simple.

Story: Packed with eye catching scenes and explosively dramatic twists to grab attention and keep the viewer entertained. Not a novel, don't watch if you're expecting Harry Potter.

Animation: 3D style, CGI style, not traditional anime. Works well with the type of anime though. Similar to Knights of Sidonia, or Godzilla. I liked it.

Sound: Not the best, not the worst. Pretty avarage. Voice acting was interesting- Switch to Japanese subs if you don't like strange English accents.

Ending: Not what you were expecting.. Unless you have played Dragon's Dogma, then you probably were from episode 1.

Overall: A very nice show to watch for its fight scenes, subtle character nuances (not full development, just some faint hints on a surface level) The two main characters do experience changes but not something I include in development, it's very gamey and forced (which is fine because Dragon's Dogma is a game duh).

Really, it's a spoiler, don't read if you don't want the ending spoiled.

Ending: The ending fight is highly anticlimactic. In fact, there really is no fight. But that is because the dragon did not actually want to fight. This may seem cheesy to you, but if you actually think about what the dragon says, it makes sense. That is, he is finally lucid after being coerced by his "nature" (curse) to do great evil, but he himself was not evil. Therefore he allowed the "hero" to slay him with great ease as compared to the other monsters, because he wanted to perish and absolve his sins. While this curses the hero to the same fate, the dragon was simply too fatigued and war-weary to carry on destroying humanity.

If you give this a deeper look, by allowing the cycle to continue sooner the dragon is actually giving humanity a chance to survive, by delaying the destruction. It is a neverending cycle, unless the hero chooses to remain sinless. Therein saying, as long as humanity is full of sin the cycle will continue to challenge the survival of humanity.

Metaphorically this is a great theme. So if you don't understant why I like this anime because of its controversial ending, this is why.

I loved it, Understand why some people hated it, especially the ending, but Also sad people didn't understand that it's not a traditional anime.

An average predictable story. Pretty much average everything.  The fight scenes were below average.   I would say they needed to change up the episodes and make him find some happiness so that the fight at the end could seem more challenging.  Dark just to be dark doesn't work for me.  The character development was iffy and sometimes without warning a character would shift as if possesed by someone else.  Its short and until the third episode you might enjoy it but then it starts getting repetative.

The story tells of a man who lost everything and ends up losing a lot more.

Without going into to much detail it was kinda meh. CGI kinda felt off with a lot of the other elements being drawn. Think I would have enjoyed the scenes better if it was all one style. (also the dragon was kinda dumb-looking)

The story was not terrible but I felt like character building was not as great as it could have been. It just kind of jumped all of a sudden. If they had added more suttle things in to help sell it I would have liked it more. You can kinda get the theme they were going for at the end but I felt kinda unmotivated by it all.

Also I cry on just about anything remotely moving or sad and this did not happen at all. This is a missed opportunity. Lack of connection with the characters and poor buildup are mainly at fault.

True to form, Dragons Dogma tells the tale of The Asrisens quest to defeat the dragon after it destroys his home and family. The shortness of this series may have contributed to this but, overall, it was a shame to not see more development of the world and characters. Still, the cast was well made and I was rooting for the heroes till the end!

I would say that if your in-between Anime's and want something that still has a good story but is short than check this out. If your a fan of the game then you'd also enjoy this. Otherwise, you may want to stay away due to how the show is made to be a battle of the day with hard questions. Unless that's your thing then go for it!

I'm not usually a fan of anime or live action adaptations of game titles. This is one of the few times where I was pleasantly surprised. The lore was not shifted or changed to suit the narrative. The creatures in the anime were as difficult to defeat as they were in the game. And the character development was not expected and enjoyable to watch. I recommend this anime for fans and new comers to the story. The animation style and music composition do justice to the brand too. Felt like I was back exploring the world when I played the game.