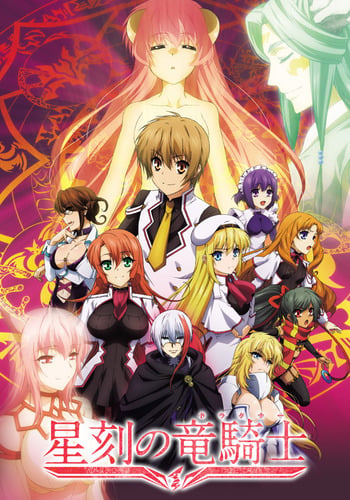 Dragonar Academy is awful.  Unless you are already the type to enjoy shows like these then maybe it's for you but if you are looking for something even remotely entertaining stay away from this garbage.  Produced by C-Station and directed by Shunsuke Tada I must say I didn't exactly have high expectations going onto this.  I'm generally not even a fan of harem shows to begin with but much of my morbid curosity stemed from the fact C-Station was once apart of Bee Train, a studio that many have come to hate over the years but I still reamin a die hard fan today for their vast and highly imagintive works.  By 2012 however it seemd Bee Train made a quiet retreat from the business with it's aged founder and director likely retiring and this sub studio breaking out on their own.

Anime is full of time honored clichés that never seem to die and Dragonar Academy is so packed full of them it shows just how void this show is of any shred of creativity or imagination. Giant bouncing breasts on all women characters, naked magic girls showing up from nowhere and mood swinging tsundere character clichés are ripe and abound in this series.

As C-Station's first produced effort, it's a marginal failure on just about everything it sets out to do. Taking from probably equally lazy source material, the scripts written by Noboru Kimura are shoddy and thrown together with no thought or effort behind them. Many tropes from Mai-Hime which Kimura wrote the manga for are present in this it feels like deja vu all over again.  Basically this amounts to being a fantasy slapped into school setting for no good reason.

There's a large cast of cookie cutter characters that will bore you with just how uninspired they are. We have Ash Blake, typical do-gooder-main character, Silivia which feels like she might have some depth but in the end is a shallow attempt at depth, her loyal maid servant who clearly is supposed to be clever and in on some grand scheme.   This is barely forgivable from a group of first time creators but the fact this comes from several long time animators. Topping off this we're treated to many moments of soft core tentacle porn, a trope you thought would have died out in the 80s but somehow has found a modern revival.  There's so much fan service and tentcle action you'd swear that ARMS was animating this series.  And perhaps the light novel is just as trashy but that hardly excuses it.

Animation and art is just as lazy with ugly looking dragons to top off the grossly exaggerated character designs. One would think with a show centered all around dragons it would be the one thing you could get right. Half the time you won't see any dragons and it will be mostly focused on whatever lame slice-of-life scenarios ripped from every other show of it's kind.  The dragons are oddly colored and look like they're stained in hard water spots you'd find on a mirror and the characters are stiff.  I'll admit I do like some of the deisngs of Anya and Siliva but that's about it.

The music was about the only thing memorable about it, at least the score was, the theme songs were typical J-pop song that feels the need to shorehorn in the entire cast for some odd reason.  I can't imagine every seiyu in Japan has singing talent yet it seems every anime that features a pop opening has to use its cast for some reason.

Dragonar Academy is uninspired, lazy and contrived. Beating down dead clichés that have saturated the market of the last couple years alone this would barely make the grade for a crappy one episode direct-to-video, forget a 12 episode season.

Perhaps it's not fair to compare or expect C-Station to be the successor to a studio I adored which made most of its work with the very auteur director Koichi Mashimo but it goes even beyond Bee Train now as we are seeing the potential end of Studio Ghibli and in this era of remakes, reboots and horrid stuff like this we need these creative forces more than ever but as long as the otaku keep running things expect more of the upteenth light novel adaptation hopefully those will have a little less soft core and a little more plot.

Based off memory. Also, spoileres.

Before I start (offensive language): To all those giving this show a 1/10 or a 2/10 just because this is generic: shut the fuck up and rethink your life choices.

Alright, no matter how generic Dragonar Academy can get, it's not as bad as lots of people are saying. The story seems really generic- dragons, the blonde that makes me want to kill myself, the loli and the retard protagonist. However, it's a bit deeper than that. The loli girl is a human dragon, why? No one seems to know. (Manga spoilers) But it turns out that the main dragon or whatever she is, wants him n her to breed. Yes, a technical form of bestiality. There's an insight for you haters that prove no point.

The characters were the most generic thing about this. Thus I give it a 4.

While I would've like to see more of this anime, its not really all that good or amazing. Unfortunately this ended up being one of those TimeSlot filler anime.

Essentialy everything is generally safe and produce in a cookie-cutter fashion. While it does hold the potential to be something great it leaves itself fairly average with only ever really touching the surface of this series.

The characters are all what you'd expect and we unfortunately never get deeper into various relationships that are foreshadowed. A great many things are also teased but never truly discuss.

Overall it doesn't do anything to really excite or envoke the imagination and instead play's it safe with things that have worked in the past creating an anime that you wish they'd spent more time on.

People just love to trash things don't they? Let me start by saying that this show isn't great but it's not terrible either. If you enjoyed Familar of Zero or Shakugan no Shana then you'll probably like this.

Eco is a lot like Louise but also different in some ways. One thing I liked about SnD is that Eco is a LOT more honest with her feelings than most Tsundere protagonists. While she doesn't confess to him in the first episode she at least admits privately that she really understands her true position as the MC's partner rather than his master as she normally claims. The MC is a lot like other MC of this type of series. Kind, dependable, panics whenever a girl makes advances at him. But there is nothing specifically wrong with him and he truely does rise to the occasion and has some cool scenes. The Princess is like the class president type character. She's not a haughty princess type but she's determined to match up to her sister and is rather critical of other people. The rest of the cast is mostly just side characters or characters that don't get too much screen time this season but they all fill their roles well and some are rather funny.

The story for this is rather interesting. Set in a world where dragons aren't just a normal thing but have a VERY close relationship with humans. This close relationship creates a world where dragons and their riders are basically the nukes of this world. No one is really supossed to use them but everyone has them so that no one messes with them. Because of this Dragonair Academy is a place to train young dragonairs from various countries although without any specific intention to fight eachother unless war happens to break out. But anyway the story follows the MC who's far was VERY late being born as in a few years late. When it finally is born it looks like a young girl. The rest of the story follows these two learning to get used to each other as people come after Eco for various reasons and a dark plot unfold in the distance. Overall it's not a very deep plot but it has a few good twists in it and is interesting enough to where you shouldn't get bored.

Animation is pretty standard so not amazing but not bad. Music is decent to.

If you don't like Tsundere then don't bother watching this but if you don't mind or even like them then it's worth checking out.